Rated by readers as the most important player for the 2014 Seattle Sounders Shield and Open Cup winning team.

It's not really a surprise that Obafemi Martins was rated as the most important player from 2014. He was nearly the league MVP. When people talk about a complete forward they are talking about Oba. He's a five-tool player, if soccer had five tools.

Martins netted nineteen goals between Open Cup, MLS Cup and MLS play. He tallied thirteen assists in MLS play alone. He was a force in green. His flips, punches and little bouncy of joy are ours.

Joe Roth once wanted someone to be Seattle's Robbie Keane. We got someone of that quality, but much more fun. 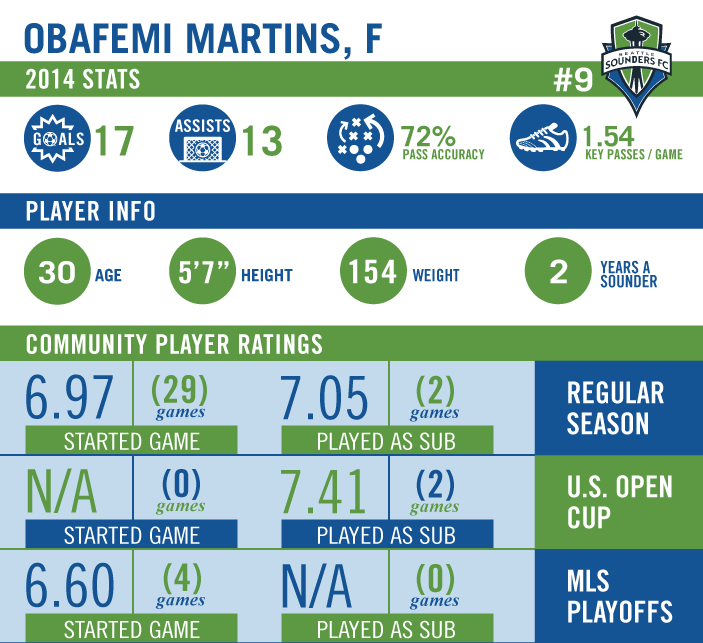 Martins is clearly a scorer. He can do so from distance; he can do it from tight spaces; he can score tap-ins; he can nod it with his head; he can score. Oba is also a great passer. He was 21st in key passes per game and his 72% pass completion included that crazy drift compatible stuff when he and Clint would slice through five defenders. He's such a dangerous threat that he's the second most fouled forward in MLS. He can provide hold-up play, burst down the touchline, be a target on a set-piece, and be the man who takes the direct kick.

Unlike most forwards Oba plays D. He applies high pressure, tracks back well. Where most forwards get called lazy, Oba's effort is rarely questioned. Only two regular forwards accumulated more tackles and interceptions than Martins - Thierry Henry and Blas Perez. Oba's strength is such that he could mark a target on set-pieces.

Oba's thighs are tree trunks. They provide a base so that the small forward can work with his back to goal. His calves pop out like large grapefruit. They explode so his sprints are comparable to the best athletes in the world. Oba is an Olympian - he is bigger, faster, stronger.

Twenty and ten and an MVP.