7 reasons you should attend a Seattle Reign match

Share All sharing options for: 7 reasons you should attend a Seattle Reign match

Note: a version of this article ran in May. We refreshed it for post-World Cup fans.

At the mid-point of the NWSL season, the Seattle Reign currently sit in second and have been unbeaten in their last eight matches. This weekend, the Reign take on the Washington Spirit on the road. Then, rivalry week is upon us, as Seattle faces the Portland Thorns twice: on Wednesday, July 22 in Portland and then Sunday, July 26 at home.

Haven't been to a Reign match before? Curious about what to expect? Here are 7 reasons you should attend a match at Memorial Stadium.

Last year, the Seattle Reign blew away competition in the regular season, winning the NWSL Shield by 13 points. This year, the team tied the China Women's National Team 1-1 (without their USWNT teammates). So, when you come to a match, you will get to see one of the best teams in the world. The Reign boast a BBC Women's Footballer of the Year nominee in Kim Little, who can do things like this. Seriously, that first touch is insane.

Reign players also include World Cup champions Megan Rapinoe and Hope Solo and team captain Keelin Winters — one of the strongest defensive midfielders in the league. And it doesn't stop there. Welsh Dragon Jess Fishlock is one of the most tenacious, impressive players you will ever have the pleasure of watching.

If you appreciate quality, possession-driven soccer, the Reign — led by Coach Laura Harvey — is the team for you.

After Reign matches, nearly every player hangs out on the field to take photos, interact with fans, and sign autographs. Sometimes, players on the opposing team join as well. You won't see more personal access in any other professional sports league. So bring your posters, jerseys, and anything else you want signed. And don't forget your camera!

Single-match Reign tickets range from $19 for upper grandstand seats to $32 for seats in the middle of the lower grandstand (the dark blue section below). These seats provide close access to all the action on the field. A similar ticket for a Sounders match would set you back around $50 - $80. If you want to get crazy, there are also VIP packages and table seating options. 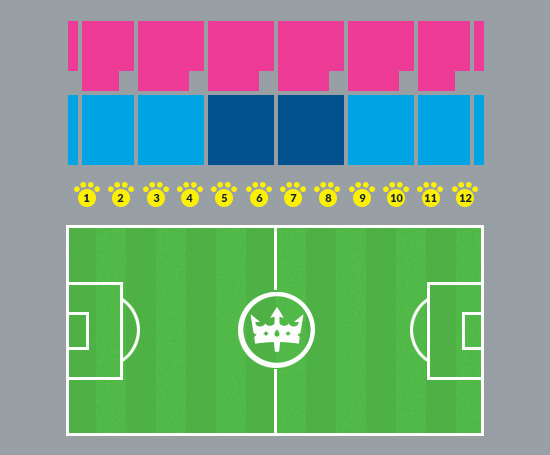 The Reign play at Memorial Stadium, which nestles against the Space Needle and the EMP Museum. There is decent parking in the area, including parking garages on 5th Ave N and Mercer. If you are up for a 20-minute walk, you can park for free on the weekend and evenings in the spots along Westlake Ave N that parallel Lake Union, or on Lower Queen Anne side streets (please obey all street parking signs).

If you want to grab some grub before the match, Lower Queen Anne has an abundance of great options. We are big fans of Red Papaya and The Masonry. You can also join Reign supporter groups Royal Guard and Fortune's Favourites at New York Pizza & Bar, get discounted drinks at Sport Restaurant and Bar with your Reign ticket, or head to the Seattle Center Armory just around the corner from the stadium.

When you come to a Seattle Reign match, you will see a lot of families in attendance. There are a number of reasons for that. Aside from a few supporters in the front row, most people sit during the match, providing unobstructed views throughout the game. The crowd certainly gets energetic at big moments, but the more subdued atmosphere provides fewer distractions so young ones are able to truly soak up and enjoy the game. Access to players is another huge draw (See Reason #2).

World Cup stars will be featured in all four final home matches for the Reign. To name just a few World Cup athletes the Reign will face:

You can see the full list of NWSL players in the World Cup here.

Tickets are going quick for the remaining four regular season matches at Memorial Stadium. Only upper grandstand seats are available for the July 26 match against the Portland Thorns. So purchase a ticket it before it's too late!

In addition — and sorry to scare you — there is always a possibility that the Reign will disappear next season. Women's professional soccer leagues have not found a way to be sustainable in the long run. Previous leagues have folded after their third season (this is year 3 for the NWSL). Help fill the seats for the remainder of the season to ensure the NWSL has the finances it needs to continue.

So, there you have it. Seven of many reasons to attend a Seattle Reign match. Do you have others to share? Leave them in the comments below. And we hope to see you at Memorial Stadium on July 26, or sometime in the future.