Following another uninspiring loss from a Sounders team that should've been inspired, things aren't looking good. How does that make you feel?

Share All sharing options for: Sounders vs. RSL - Aftermatch Aftermath: A Safe Place

The Seattle Sounders lost. I'm sure you noticed that and my pointing it out only further reinforced any frustration you might be feeling. I'm not here to open up fresh wounds or annoyingly needle you. We're friends here, and I share in your frustration.

But do you know what? It's okay. It's okay that the Sounders lost. Sure, it was a rough way to spend a Saturday night, watching Seattle futilely struggle against a struggling RSL squad. The two goals Seattle allowed are the type of goals teams only allow when they're already down on their luck; accompanied by a rolling of the eyes and an overly sarcastic utterance of resignation.

So then why is it okay, you ask? Well, to put it in an overly dramatic way, it's okay because in addition to the Sounders losing, you could also be on fire. Are you on fire? No? That's good. I assume that would be less than pleasant. Since you're not on fire is it safe to say that things could be worse in your life than just the Sounders losing?

The shelter and sanctuary the Sounders normally provide for us, the reality escaping avenue they generally excel at being, well it's been shaken to its foundation these past few months. Games against Orlando City and Olimpia helped to show us that maybe the dark days were over, but another listless performance against another Western Conference foe has knocked us back down from the rungs of this ladder from which we were so desperately clinging.

This reality has been a difficult transition for some. By golly heck, it's been difficult for me. As a result I want you to know that this is a safe place, a place where you can vent or talk about how Seattle's struggles are affecting you, affecting your daily life or your sports fandom.

So you know this isn't a one-way street, allow me to be vulnerable and tell you my most embarrassing moment:

I was a teenager at some youth-world conference in Missouri. Included at this conference were, as you most likely guessed, youth from around the world. We were all high school-aged teenagers, and I'd been going to this same event for three years prior, each time accompanied by some of my closest friends. We were a known entity -- those guys from Seattle -- and we carried with us a bit of clout, an air of awesomeness we did little to discourage.

During one of the days of this event, the organizers had rented out five or six of those bouncy castle type games: gladiatorial jousting, giant slides, bungee runs, etc. Since there were three of us, my friends and I headed over to the velcro wall. If you're not familiar with it, here's a picture. 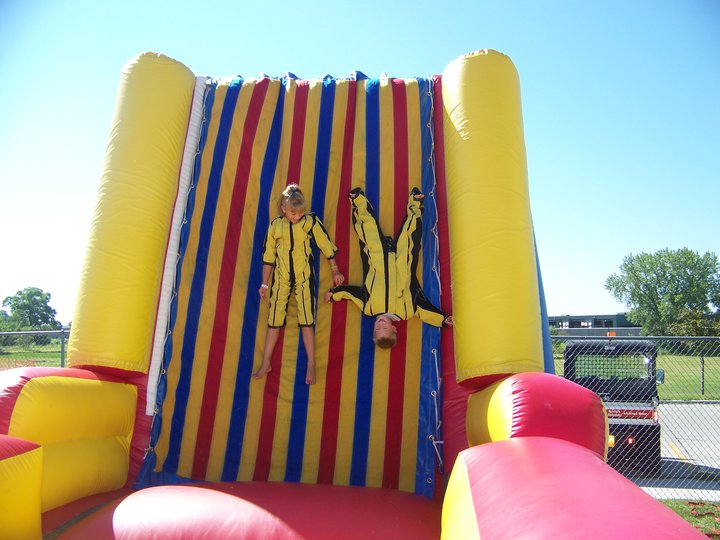 The three of us suited up and got to work, using the tried and true trampoline method of double-bouncy. Two would launch the third high into the air, who would contort himself into a position and land near the top of the velcro wall. We were rocking it and were drawing a crowd with our antics.

I got cocky. Facing the wall, my friends double-bounced me to great heights. I did half of a front flip, using my head as the point of rotation. I landed flush with my back to the wall, arms out to the side, and legs underneath me: the anatomical position. If you're having difficulties visualizing, well I drew you an illustration.

As a result of my perfect execution I was firmly velcro'd to the wall. Every point of my velcro-covered body was fastened by the ingenious loop and hook. The problem here was two-fold, and it compounded. First, the suit was quite loose on me, but not too loose, enough to where I could move within the suit but not with enough momentum. The second problem was that I wasn't a very strong youth. I had a runner's physique which limited my upper body strength. So effectively, I couldn't get myself down and I was stuck.

The onlookers realized this quickly and started to laugh. Wondering what was funny enough to elicit laughter from the velcro wall, those who weren't onlookers quickly became some and joined in the laughing. All at my expense. My friends, with only one person to assist on the ill-fated double-bouncy, were having difficulties getting to my location and grabbing a secure enough grip to pull me down. Eventually they did it, but not after being stuck upside down for a minute or two, which proved to be enough time to get everybody laughing at me. I'm generally not fazed by public shame, but the humility was strong in me that day.

I've felt that shame sometimes after watching some of the Sounders games. It's not my favorite feeling in the world and it's one I hope to avoid, especially when watching my favorite sports team do sports things. Alas, life can sometimes be cruel. But just know that we're a family here. Sometimes families have disagreements or issues that we work through, but we ebb and flow as a whole, riding the highs and lows together, in whatever form that takes. I'm here for you, just as you would be here for me. Your pain is mine.

Well, this isn't the start I was anticipating.

It's like the Sounders are making things harder for themselves.

I actually thought they'd pull it off and prove victorious.

This whole thing is getting a little ridiculous.

This game certainly brought those good feelings to a sudden stop.

Surely the Sounders will hit their stride soon, right?

What if we don't make the playoffs?

Back to the dark days with us, I guess.

At least these foxes are having fun.