Sounder at Heart writers share their favorite Sounders v. Portland Timbers memories. We have many.

It's Rivalry Week. Are you ready? Are you pumped for a Cascadia battle?

Okay, okay. The Seattle Sounders are not the most exciting team at the moment. But the Rave Green face the Portland Timbers on Sunday. THE TIMBERS. It's the best rivalry in Major League Soccer. The Cascadia Cup and MLS playoffs are on the line. This game is huge.

Need a refresher on the rivalry to get motivated? Let's take a walk down memory lane.

I asked Sounder at Heart writers to share their favorite Sounders-Timbers memory. I was surprised at the diverse responses I received. Here they are, in chronological order.

48 seconds. My first away match (along with many others' first away match). PGE Park. July 1st, 2009. Seattle v. Portland in the U.S. Open Cup. I was just a minute late getting to my seats because the beer line was long. I heard the cheer from the away section as I was coming from the concourse through the tunnel to the away section. I missed Roger Levesque's goal, but saw the celebration.

I didn't move to Seattle until 2009, and by the time I got here, the Sounders had already faced the Timbers. So my introduction to the rivalry wasn't until 2010, which was when the Sounders beat the Timbers in penalties in the U.S. Open Cup. What I'll never forget is standing among five friends at a local bar, arms hung over one another and holding my breath for each kick. When Scott converted to clinch the victory, we let the kind of massive cheer I have rarely enjoyed in my sports fandom. Not only did I get my first taste of that rivalry, but I also felt like I was truly a Sounders fan after that day.

For me, the best moment happened in the first ever MLS Timbers-Sounders match. Played in heavy rain, on my 36th birthday, it was a game that won't go down in history. The Sounders had one of those draws that feel like losses. It started with Decades of Dominance and that brilliant 11-panel display. In the 52nd minute, Flaco lifted our heads, our hearts. He scored on Portland for my birthday. It was a gift to me. I've blotted out the Rodney Wallace tying goal. I may never have seen it. But that goal from a James Riley throw, a Nate Jaqua chest pass to Roger Levesque who chipped to Fredy Montero. Montero's flick-on header put Fernandez into space. It was fun. It was a declaration that Seattle isn't just first in soccer, we're better at it too. 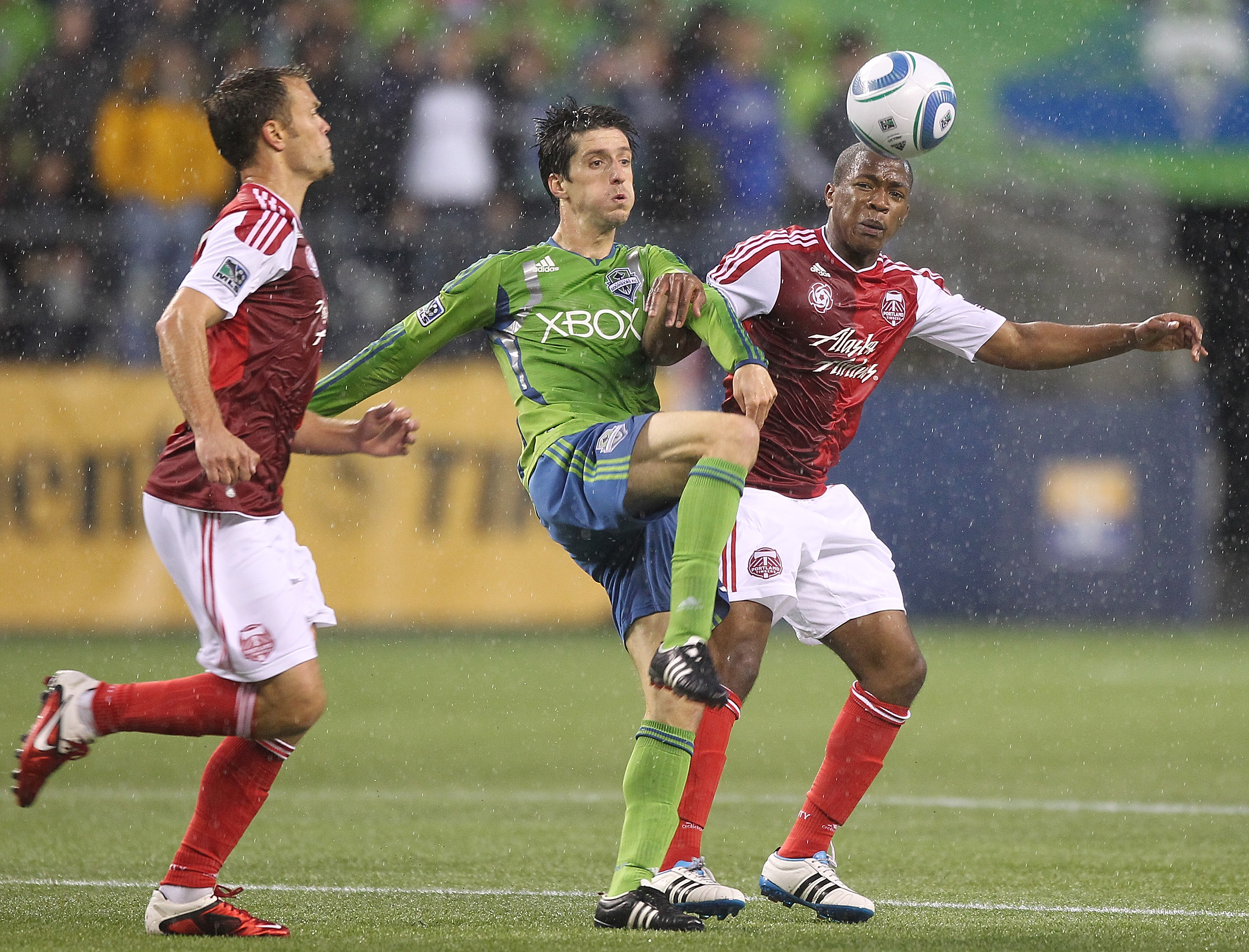 My favorite rivalry memory was the first goal we scored in MLS. The first thing I remember was the rain. To this day I don't think I've been outside, completely without protection (wardrobe: Jersey, shorts, very ventilated running shoes) in such an utter deluge for that long. By the time I got home that night the ticket in my pocket had disintegrated into a pulpy mess. People around me had their phones destroyed. Even jumping into a lake wouldn't have left me that wet, but it was perfect for the atmosphere surrounding this historic moment, helped along by the incredible "Decades of Dominance" tifo. My buddy (at his first Sounders game) and I had taken cover at halftime because it was simply too nasty. I made it back to my seat just in time for Alvaro Fernandez to slot one in and send the crowd into a frenzy and start things off right. That match ended in a draw, but a few weeks later we went into their house and knocked them off.

My favorite memory was the 1-1 tie in Portland September 15, 2012 . I won the away lottery and went down the night before with my friend Jason. We sat hungover with supporters and as usual the crowd was awesome. Goals from Wallace and the mighty Montero highlighted a fantastic struggle on the field that had everything: the drama of competition, refereeing controversy, heroes and villains. Even though I was screamed at by Portland fans while eating in the brewery, my favorite memory of the entire weekend actually was sharing a meal after the game, 4 Sounders fan friends and 4 Timbers fan friends all together. It was fun to just realize that for us, our friendship was bigger than the game rivalry. This was also the day I took a rather infamous picture of Salazar at the table next to us drinking beers with Timbers fans. Stupid Salazar.

My favorite SEA-PDX memory was probably the 1-0 victory in 2013 at home that was a full sell-out of the CLink and Dempsey's home debut. A win, in front of that many people, with Dempsey involved, and one of the best tifos ever (the Build a Bonfire with the Sounders horsemen)?  Amazing. While the level of play and drama in some other SEA-PDX matches have been higher, all the other factors make this the one I'm saying today is my favorite. And yes, this means Shalrie Joseph played over 55 minutes in one of my favorite Sounders games. 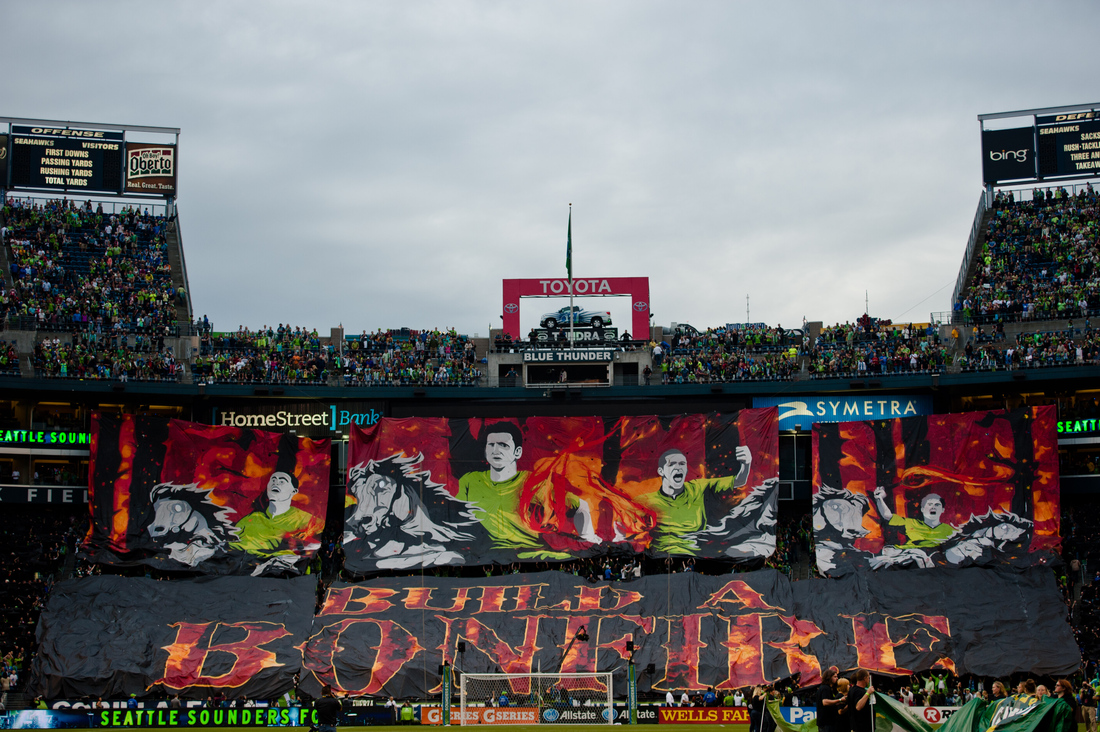 While this wasn't a win, the game featured an epic comeback, a Dempsey hat trick and snatched the victory away from Portland. The elation from the Sounders side and the frustration of the Portland side epitomized the nature of a rivalry.

My other favorite Sounders-Timbers memory was when Andrew Weber (playing GK for Portland) threw the ball on the roof of the net after a goal, trying to slow down the Sounders. Even Dempsey laughed. It was great!

I'm going back to one of the few games I never got to see live. I barely even got to see highlights of this but the 2014 U.S. Open Cup win in extra time at Starfire was really memorable. I traveled with the Sounders Women's side for their games in Colorado and gave up my ticket. We missed the whole game due to our match, and I finally was able to really check Twitter since the stream wouldn't load on my phone while I was at dinner. Bam: Goals. So, not my favorite game but one of the most memorable.

I think my views on the rivalry may be a bit nontraditional. I love (and miss) all the northwest, including Seattle's neighbors, and I'd be happy to see all of Seattle, Portland, and Vancouver place at the top of the league (granted, I'd prefer to see the Sounders in 1st). I think the rivalry is best when the level of play matches the enthusiasm of the fans... unfortunately many games between Seattle and Portland have seen one or the other team at something less than their best. I think my favorite game and memory may be the August 2014 4-2 Seattle win in Portland. The defending was shaky at times on both sides, but the game featured some pretty goals and interplay, and the win heralded the great run for the shield.

So, that was an enjoyable trip down memory lane, but we still didn't share every great Cascadia memory.

What was your favorite Sounders-Timbers moment?