Your 2015 Reign Newcomer of the Year

The Reign had a host of new talent in 2015. One Scottish defender rose to the top of our list.

Share All sharing options for: Your 2015 Reign Newcomer of the Year 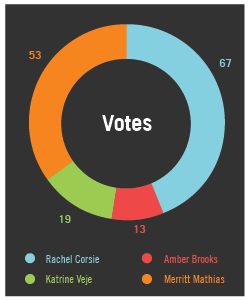 In this horrifically long offseason, Ride of the Valkyries has been slowly unveiling the results from our Seattle Reign team awards. Lauren Barnes won Defender of the Year, while Kim Little was named Offensive Player of the Year. Now it's time to unveil the winner for Newcomer of the Year.

Newcomers Amber Brooks, Katrine Veje, Merritt Mathias, and Rachel Corsie all had a significant impact in 2015. While the competition among the top two in this category was fairly tight, Corsie ended up victorious, getting 44.1% of your 152 votes.

Here's a more detailed look at the standings.

I very clearly remember the first game Rachel Corsie started. It was against the China women's national team. Early in the match, she collected a ball in the back, and two forwards from China came charging after her. Instead of quickly sending the ball to one of her outside backs, Corsie continued to push up the field, then juked the opposition and calmly dribbled around them. The move turned me from panicked to impressed in an instant.

After the China match, Corsie solidified her starting position alongside Lauren Barnes. She was skilled with the ball, won virtually every header that came her way, served as a constant threat on set pieces, and was a strong physical presence along the backline.

Mathias came to Seattle in a deal that sent Kate Deines to FC Kansas City, who then promptly retired. Fans were a bit unsure about whether Mathias would be able to fit into the Reign offense, but those concerns were quickly put to rest. Mathias finished the season with 17 starts, two goals, and two assists.

Mathias was often asked to do thankless tasks, like opening up space for teammates and pressuring the backline. It didn't go unnoticed, as Mathias was everywhere. She was quick to close down on defense when the Reign lost possession, and she consistently created chances for her teammates.

Bonus: Mathias passed along her love of dancing at nearly every turn.

If Veje had played with the Reign for the entire 2015 season, I suspect she'd be higher up on the vote count. Veje, who joined the team in July, clearly had the technical skills to succeed in this league. She boasted some of the quickest feet I've seen on the ball, and could play on either side of the field — taking it down the flank or cutting in on her preferred left foot. Veje had a number of good looks on goal, but was unlucky to never find the back of the net. It would have been nice to see her suit up for the Reign again this season, but she was homesick and returned to Denmark.

Brooks had the misfortune of playing in the midfield, which was already loaded with talent. Kim Little, Jess Fishlock, and Keelin Winters started in virtually every game. In fact, Winters missed just one game to injury, and Fishlock missed one after picking up a red card. That left little room for Brooks or Mariah Bullock to get significant playing time. In her 421 minutes, Brooks was a solid holding midfielder. She was asked to take on more offensive duties this year and she proved up to the task — scoring one goal in 12 matches. Now in Houston, Brooks should get significantly more minutes.

With a number of new faces on the Reign roster for 2016, we expect the new set of newcomers will have a similar impact this season. And we're good with that.