Getting into Club America much easier than feared

This is the first entry in a new column by Mike Standish aiming to give a perspective on the fan experience.

Share All sharing options for: Getting into Club America much easier than feared

Hello, and welcome to your 2016 Seattle Sounders season. One game is in the books, and there's another one coming right up, which is a perfect time to check in on a few things that are different this year.

New: Getting Into the Stadium

The big question leading up to the game: How much of a pain is it going to be to get inside because people can't figure out the app? Not much, it turns out.

Part of that is due to the fact that a lot of season ticket holders sold their seats to Club America fans who had to print their tickets for entry. As a result, it's not exactly an accurate predictor of what will happen on March 6.

Still, the app is mostly fine. I'm not a ticket traditionalist. I don't want a book of paper tickets. I'm fine without carrying a plastic card in my wallet. But an app has to be easier than both of those things before it can be considered a success.

The thing is, the app is close as it is. Fix a few bugs and make a couple of UX and content strategy tweaks and it'd be downright good.

First, we have to consider what the app is for. It's for lots of things, but the absolute most important is getting you into CenturyLink. If that's the most important thing, you'd think it'd be on the home screen of the app. Is it? Here's what you get: 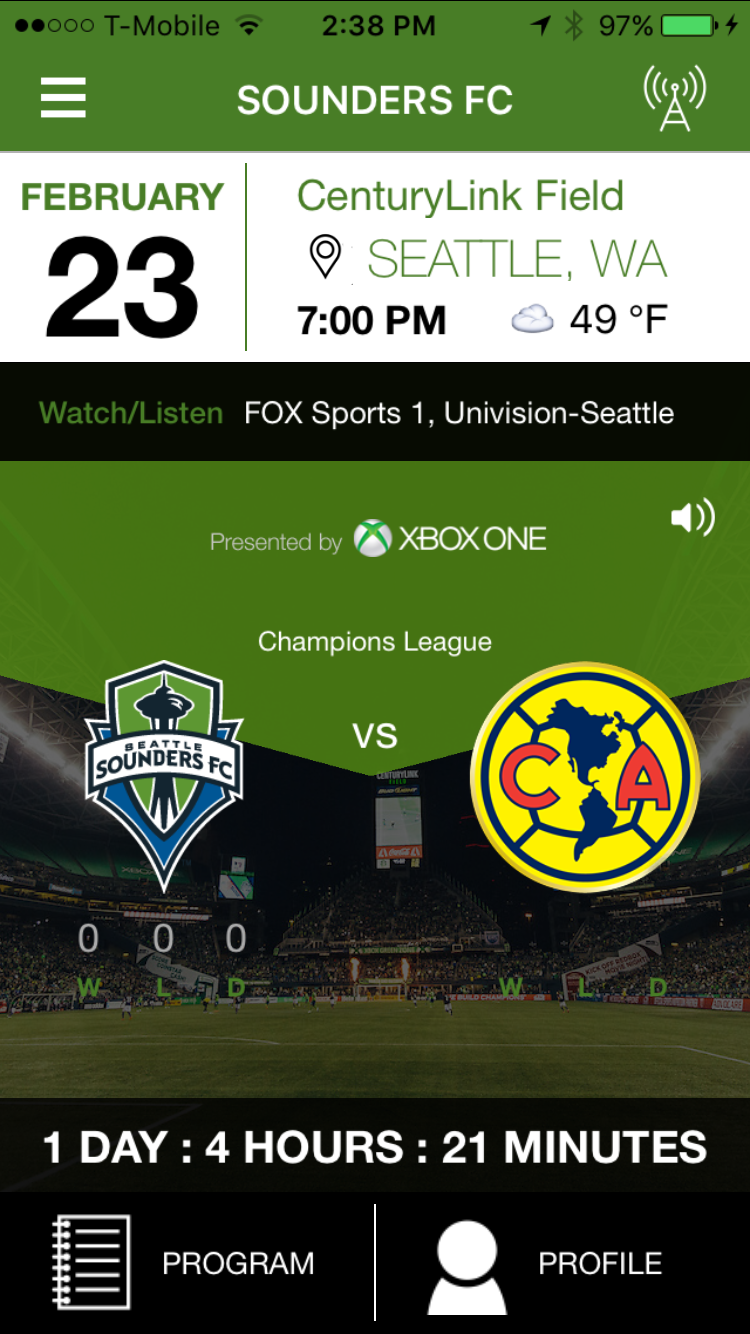 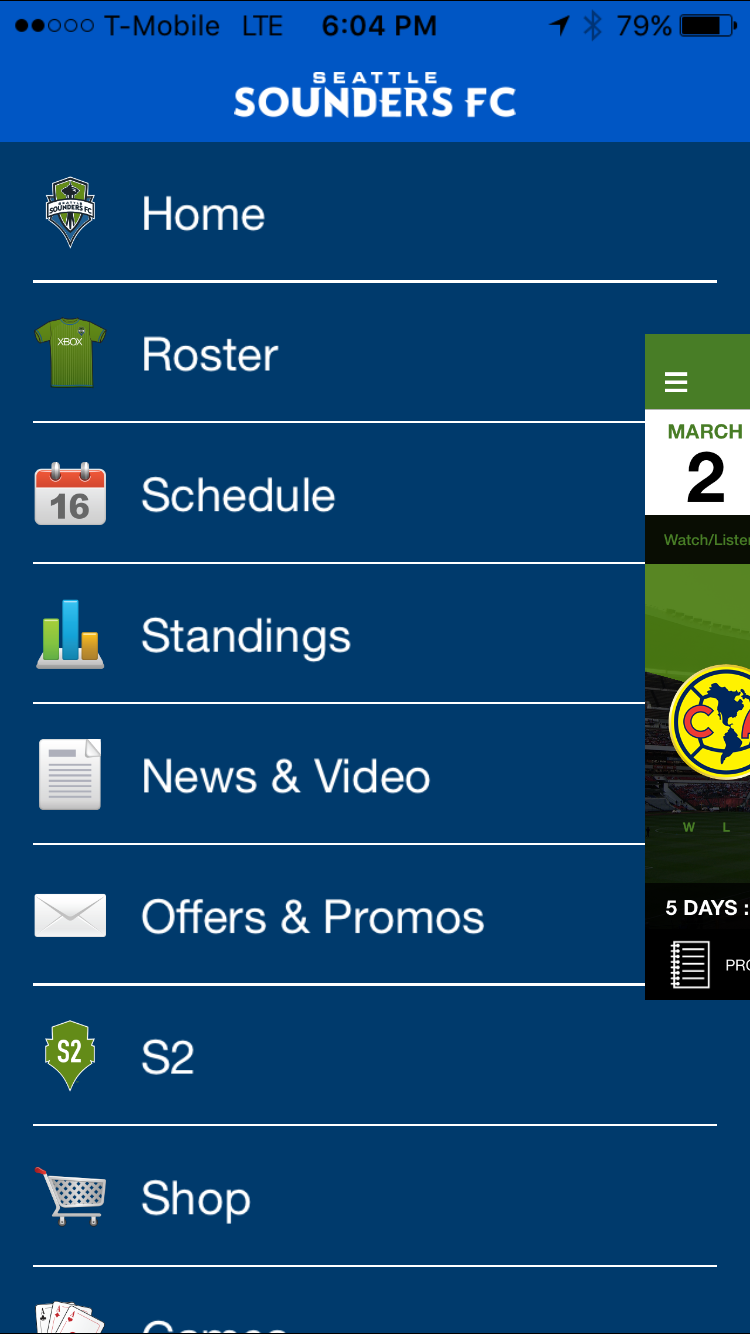 Is there anything on the initial menu screen that tells you where to get tickets? Nope. There's pretty much everything but your tickets. Heck, you can get info about S2 before you see anything about how to access your tickets. To do that, you have to scroll down to your account manager: 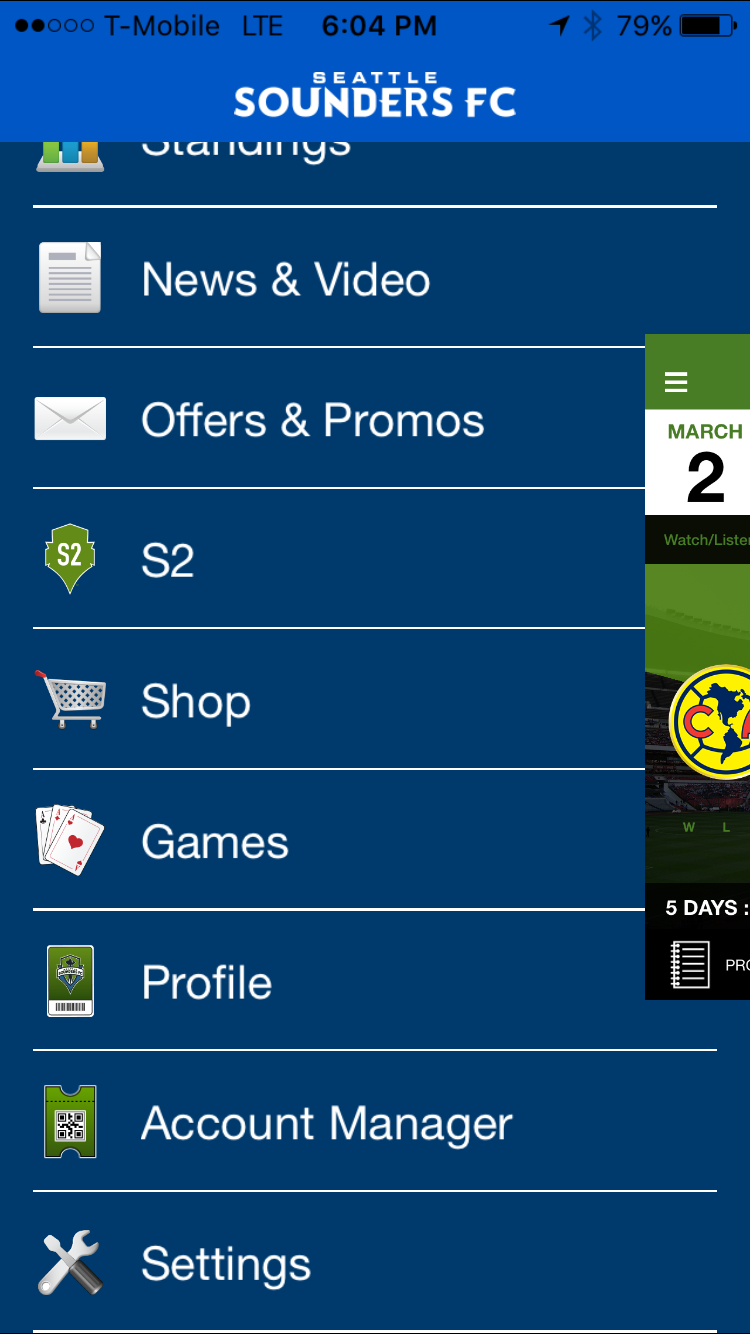 And from there you're still two taps away from an actual ticket. What would be really handy is having your scannable ticket right on your phone's lock screen. The only way to do that (in iOS in this example) is to put the tickets in Apple Wallet -- but even that functionality is a wee bit hard to find and after the match I had to manually remove my tickets.

Update: after a helpful call with my ticket rep on Monday, I learned you can also access tickets via the Profile link on the home screen -- but the actual scannable tickets are still a few taps deeper. At least in my experience, ticket reps are way more proactive and helpful this season.

Why not just put the most important things in the most accessible places?

Is this the end of the world? Of course not. Did I get into the game? Yes. Will fans and stadium staff eventually figure this out? Sure. Am I one of the few design nerds really bothered by this? Probably. But it could be so much easier with just a few simple ... eh, forget it. There are more interesting new things to discuss. Such as ...

It's so green. It looks so good on TV. It's so not something that Timbers fans can mock, because it's the same stuff they've got. Aside from how the players feel about it (which is seemingly fine), isn't that really the most important thing?

New: The Number of Traveling Visitors

Back in the day, you'd go to a Champions League game at Century Link and there'd be about half the usual number of fans in attendance, like the 23,000 and change that watched the match against Santos Laguna in 2012.

To get 42,836 in the middle of the week is quite a feat. But, um, a lot of those were Club America supporters. Walking around Pioneer Square hours beforehand you could tell they were going to show well. There was yellow, blue and red everywhere.

Inside the stadium it was even more noticeable. It honestly felt more than a little like going to a Mariners game when the stupid Red Sox are in town.

But there's a certain energy to be found when you know a Sounders goal will anger a lot of people standing around you. It makes you yell louder. You're defending the honor of your house. I'll take the pleasure of taunting my neighbors over empty seats and tarp any day.

At the time of this match, I needed a new jersey. My rotation was an old bra-strap "H. Badger," an Olympic White "El Toro" that I bought one game before Roman Torres destroyed his knee and a two-year-old "Deuceface.gif" model that doesn't seem clever anymore.

The new Pacific Blue third kit is admittedly stunning, and I saw a fair number of them at the match. But I'm a Rave Green person, and seeing the team debut the new primary kit against Club America clinched it -- I bought one of the sweater-vest shirts and threw a "J. Jones" on the back.

And I mean that in a good way. The MLS offseason is a short one, and it was two weeks shorter due to CCL action this year. But it still felt like I had been away from my friends, my stadium, my team for far too long. I hadn't realized how much I had been missing it. It was great to be back, and that feeling will never get old.