Building upon the excellent work of The Other Sheriff, I'd like to chime in on Chris Henderson's most recent twitter post. This one is not of a stadium, nor does it contain any soccer references whatsoever. It does, however, give us very strong clues to where he is (assuming he's posting a current pic and not trolling us).

It is 90 degrees and Robo Cops are in full gear. pic.twitter.com/2M1XY1NM8v 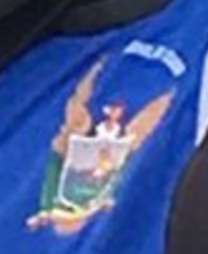 The Andean Condor here is a dead giveaway that we're in South America, and on the west coast. A little quick googling tells us we're in Ecuador, as the horse blanket carries the crest of the Policia Nacional del Ecuador.

90 degree weather. Ecuador's top flight only has 12 teams. 5 of those teams are located in Quito. Quito, the capital of Ecuador, lies at over 9,000 feet above sea level. As one would expect, the temperatures in Quito are much lower than it's surrounding lowlands. On April 30th, the high in Quito was a pleasant 69 degrees.

The other 7 teams are located in Guayaquil (3), Cuenca, Loja, Sangolquí and Ambato. The latter two can be ruled out, as both had weather similar to Quito.

The schedule. Liga de Loja was scheduled to play in Quito. That game was postponed, as have been a number of games, due to earthquake damage and recovery efforts. That narrows us down to Cuenca and Guayaquil.

Clue #4:
The blue wall. Some of you may find this to be a stretch...but work with me here. That particular shade of blue is specific to one team, and one team alone. While Deportivo Cuenca did play at home on the 30th, and while the weather there was a match, their club sports the colors Red, Green and Yellow. No Blue. Furthermore, look at the shade of blue in this rendering of a new stadium in Guayaquil. Look at this home jersey. Compare that shade of blue to the wall in the background of Chris Henderson's photo above. For me, that's a very, very good match. Add to that the fact that the other two teams located in Guayaquil did not play on April 30th, and I think we've located both the city visited and the match watched. Emelec, who are regularly one of the best teams in the Ecuadorian Primera A, defeated Aucas 4-0 at home to take over 1st place in the table.

Who might Chris have his eyes on in this match?

Aucas is a small team with lots of very young players about whom little information is readily available. Emelec is a team loaded with 28+ year olds, but they have a pair of 23 year olds who are regulars in the XI who are interesting prospects:

The first guy who jumps out at me is Emelec's Fernando Gaibor. Wikipedia has him as an attacking midfielder. Transfermkt has him listed as a defensive midfielder first, and secondarily as a right wing and a box to box central mid. I'm inclined to believe wikipedia on this one. First off, he wears the 10. My impression is that the number system seems to hold more weight in Central and South America. Second, he has spent his entire career with Emelec, scoring 24 goals in 166 games. Those numbers indicate a more attacking player (3 times what Ozzie has in league play). In addition, this 2014 video shows him as much more of a central attack minded provider-type. He's just 24 years old and has 3 caps for a good Ecuadorian MNT. He appears to be fairly fast, and is a stout 5'10 1/2", 165lbs...built to hold up to the rigors and thuggery of MLS. He has 2 goals and 2 assists through 8 games in league play, and has 1 assist in 6 appearances in Copa Libertadores (from which they have been eliminated). He's on contract through the end of the year and would require a transfer fee. He would be an intriguing TAM signing.

The second is Cristian Guanca, a 23 year old Argentinian playing for Emelec. Guanca is more of a winger and strkes a nasty, heavy, knuckling ball. He certainly doesn't appear to be tigger-shy. He's currently on loan from Club Atlético Colón of the Argentinian Premera.

Aucas has an attacking mid/winger named Ayrton Preciado who has 3 goals and 2 assists through 9 league matches. He's young - just 21 - and has some exciting attacking qualities...but his game definitely still needs some polish. Still, at just 21, he'd probably be a non-TAM signing with upside.


All of this obsessing over the whereabouts of Chris Henderson may seem a bit extreme. That's because it is. For me, it's a coping mechanism - a way to pass the time. In a prefect world, I'd be following the breadcrumbs that Garth left us from his most recent travels. When he travels, it's more likely a deal-making trip than a scouting trip. Unfortunately, that's not how Garth rolls. He keeps his secrets well. For now, we can have fun speculating and hope that with the recent end to the Chilean clausura (which saw rumored potential targets Jeisson Vargas, Jaime Carreno and David Llanos crowned champions) that Garth enjoyed some fine Chilean wine and cuisine, and that we may see some action in the very, very near future!