Share All sharing options for: Loss to Dallas continues a trend of poor performances in final third

Surprise, the Seattle Sounders still have problems. Saturday's 2-0 loss to FC Dallas highlighted issues on both sides of the ball and while the Sounders played well at times and crafted spells of good possession, their attack is still disjointed and their midfield still lacks a continuous identity.

Those factors coupled together to give FC Dallas the few open moments they needed to craft opportunities against what was otherwise a resolute Sounders defense. 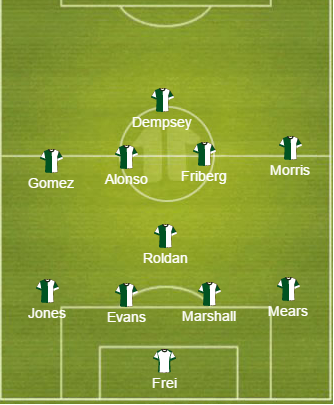 In a season of tactical variation, the Sounders opted for their 3-man midfield approach utilizing Cristian Roldan as the deep anchor and Erik Friberg and Osvaldo Alonso as the main line of confrontation. However, the Sounders predilection to drop a winger deep was not present in this match from the onset as Friberg and Alonso pushed high to form a high pressing line in an effort to directly attack the Dallas midfield. This formed a defensive structure for the Sounders more akin to a high pressing 4-1-4-1. 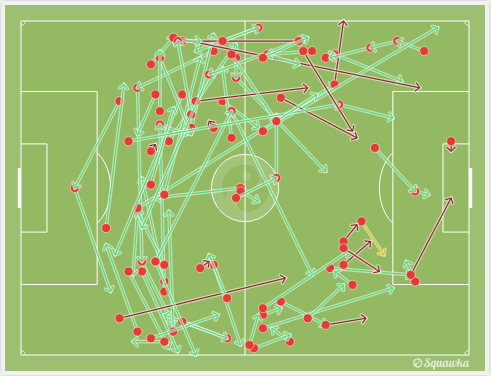 The aim was to disrupt service into the Dallas duo of Victor Ulloa and and Carlos Gruezo but it was a plan that backfired spectacularly for the Sounders. Faced with an aggressive line and acres of space between the Sounders lines, Dallas instead opted to push Ulloa or Gruezo high with Diaz to overload Roldan in midfield and used the Sounders' lack of attention to their fullbacks to pump balls into space. With Roldan overmatched, the Sounders backline scattered as Mauro Diaz, Tesho Akindele, and Michaeal Barrios took their turns eviscerating the Sounders backline.

Not to be overly dramatic, but the first 20 minutes of Saturday's loss could have been a bloodbath if not for Stefan Frei coupled with a woeful performance from Fabian Castillo.

For the Sounders' part, Sigi Schmid righted the ship 20 minutes into the match by dropping Alonso from the high line of confrontation to partner with Roldan. Coupled with a more aggressive man mark on Diaz, the Sounders were able to regain control of the center for the rest of the match even if they couldn't fully stop the Dallas attack.

On the opposite side of the ball, the Sounders were anemic. The re-introduction of Erik Friberg to this side has re-invigorated their possession play and despite a sub-par outing from Roldan on the ball -- he was targeted, harassed and pressed into bad passes and questionable decision for much of the first 45 minutes -- they were effective moving the ball forward when they could get past the potent Dallas press.

After entering the final third though, the Sounders are still infuriating. The lack of speedier options at either wide forward position left Dallas able to push their defensive lines higher where simply the act of delaying or harassing on 50/50 balls gave their midfield the time to cover the short distance necessary to re-form proper defensive structure.

While Dempsey, Morris, and Gomez for their parts were effective in build-up and transition, nothing the Sounders tried on offense was effective until they overloaded wide space with Friberg starting in the 2nd half. Friberg spent the majority of the second half attacking wide space in conjunction with Gomez and Morris moving centrally, combining with the fullbacks and attacking in transition play.

That approach was a far cry from the Sounders' rotating 3-man possessional midfield in the first half. It's likely that this transition was a tactical choice from the outset in an effort to sustain the Sounders until the point at which the Dallas press exhausted itself. Here that was when Akindele walked off the field in the 55th minute and was replaced by Kellyn Acosta.

The Sounders' offensive changes in their own right continued much of the second half but with an decreased reliance on Friberg. Andreas Ivanschitz dropped deeper on the left occupying much of the creative space Friberg had been using in the previous 20 minutes. The Swede alternated with Alonso pushing higher into attack when Dempsey dropped deep to receive the ball between lines, while both pushed wide on the right in support of Tyrone Mears.

Despite all that possession though, the Sounders' inability to transition fast or push the line left Dallas with little to do other than keeping their center backs and midfield structured to repel possession. A late counterattack goal sealed the fate of the Sounders, but really their fate had already been sealed by an inability to create space for themselves in the final third.

The team's issues in attack don't seem to have an easy fix short of bringing in new players and the trade of Lamar Neagle to DC United looks worse every week when the Sounders' lack of speed allows oppositions to congest the midfield and stifles attacks in transition. The Sounders are not good enough -- and really no MLS team is -- to possess an opponent to death and win 1-0 every week.

For every win against San Jose where possession is they key, there is a loss against the likes of Dallas where they don't have the necessary pieces to put themselves in a position to win. The Sounders need alternate options and right now, they simply don't have them.