Sounders vs. Columbus - Aftermatch Aftermath: The Art of Stealing

A home win. Another goal by Jordan Morris. Beating the bitter Crew. Nothing could dampen my mood, right?

Share All sharing options for: Sounders vs. Columbus - Aftermatch Aftermath: The Art of Stealing

On Saturday the Seattle Sounders beat the Columbus Crew 1-0 in a game that won't be saved for posterity. It wasn't the prettiest game, with both teams missing plenty of opportunities to score until Jordan Morris put the ball into the back of the net with minutes to play. No matter how pretty, no matter how ugly, it was a win and the Sounders earned the three points.

I'm not going to sit here and say that this win means we're well on our way back to being the dominant side we have been throughout our history, but it is interesting to me to note that this type of game was the kind we were losing at the beginning of the season. But this time we won.

If the Sounders can win every game where they have defensive and goalkeeping miscues, then they'll be sitting high and mighty at the end of the season. To be honest, though, I did not expect to win this game.

Even though Columbus has struggled this season, they're probably the best team we've faced so far in this young season. They have talented players, a quality coach, and a style of attack that seems to work against Seattle. But this time, this time it was different.

Federico Higuain was practically nonexistent in this match, tracked out of relevance by Osvaldo Alonso and Cristian Roldan, yet he still almost scored two goals. Kei Kamara was invisible for the most part, shadowed by Zach Scott Man Marker, of all people. Yet still Columbus had the run of the first half, unlucky to have not found the net.

Shrewd halftime adjustments by Sigi Schmid and Co. saw immediate results as the Sounders exerted their will upon the Crew, who were forced to bunker and counter for the rest of their game, abandoning their high press style. As fate would have it, the Sounders were unlucky to have not found the net, not until Jordan Morris unveiled his golden left foot upon the world.

As it would happen, the Sounders stole a win from the Crew. Just like Sounders Posters by the People stole a photo from our very own Mike Russell without payment or attribution. Seriously, look at this blatant thievery: 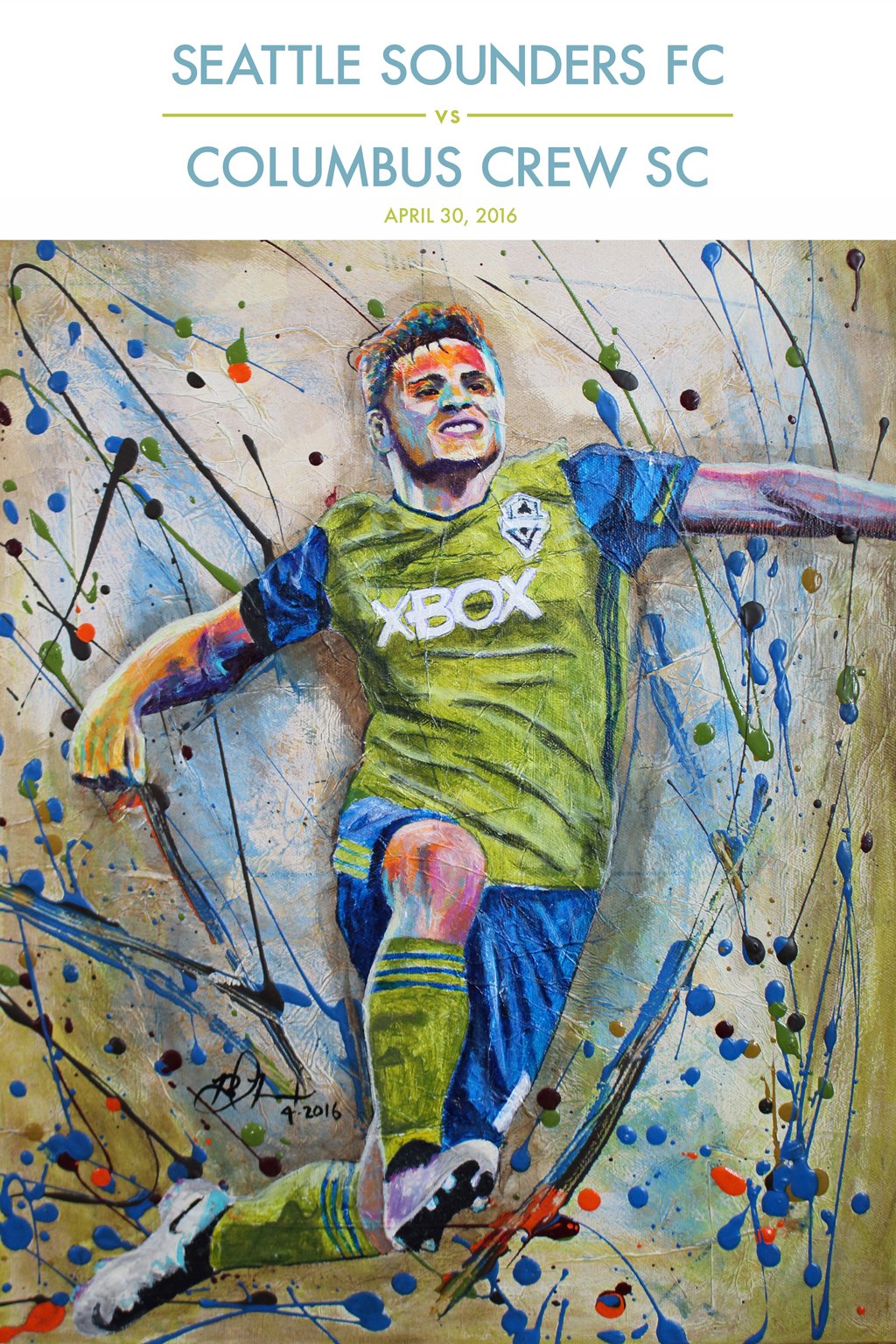 Look, I know you're probably getting mixed messages. Here I am, saying it's cool to steal wins and points from other teams but not cool to steal copyrighted material from photographers to then sell to the public, it's like saying it is okay to rob one bank but not the other.

While I'm glad that the Sounders won, and I'm relieved that we have earned 10 points in our last 5 games, I'm kinda bummed for Mike. I'll sometimes see these articles of mine posted on other sites, some of them link back to here, some of them don't. Some of them use my name as the author, some of them don't, and really, that doesn't bother me all too much because I'm not getting paid to do this one way or the other. But that photograph is owned, and someone looked it up online, printed it out, painted it, and sold that painting.

So Sounders, thank you for the enjoyable game, thank you for the win, but next time someone peddles a poster you know comes from a copyrighted image from one of your fans, don't give it a thumbs up and slap a price tag on it without doing your due diligence first. It just taints what was a good taste in my mouth.

The gifs formerly known as gifs

Not the start I was hoping for, to be honest.

What a nasty, nasty giveaway by Frei. That's a gift of a goal.

Oh man, Higuain. That was dumb.

I'm gonna sugarcoat this a little bit, but that was an awful first half.

Does anybody want to score this game?

Every scoring chance just gets ruined at the end.

Okay, that was a pretty blatant handball in the box there. Yet no call?

We did it! We won a home game!

I mean, it's nothing. Just a Sounder doing Sounder things.