The fourth tiebreaker is the drawing of lots. That's the least likely thing to happen. One of Brazil, Ecuador or Peru will face the United States on Thursday.

Share All sharing options for: Copa America 2016 quarterfinal scenarios: Who will face USA?

Let's fill in the blank for this Thursday's Copa America match between USMNT and [____], at CenturyLink Field in SEATTLE, WASHINGTON at 6:30 PM PDT. The U.S. will face the second place team of Group B. There are three potential opponents, Brazil (7), Peru (48) or Ecuador (13). Seattle fans are probably somewhat familiar with Peru, as they just played in Seattle on June 4th, garnering a 1-0 victory over Haiti. Poor little Haiti has been eliminated with two losses, and each other team in the group could wind up in Seattle depending on Sunday's results. First, let's look at the current table. 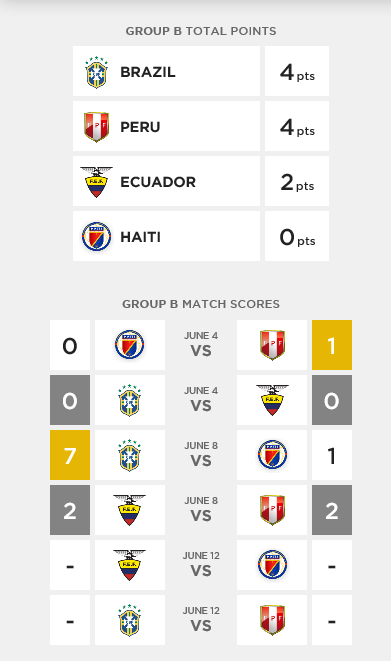 Brazil and Peru are atop the group with 4 points each and play each other on Sunday (5:30 PM, FS1 & Univision). Ecuador trails with 2 points and plays Haiti earlier on Sunday (3:30 PM, FS2 & Univision). Here are the scenarios in which we play each team. As a reminder, tiebreakers are Goal Differential, Goals Scored, then head to head, then drawing of lots.

In obviously the most fun scenario, we could see the drawing of lots to determine our opponent. One way this would happen if Ecuador beats Haiti by 6 goals, then Brazil and Peru tie scoring 5 goals less than Ecuador (if Ecuador wins 6-0, then Brazil-Peru ties 1-1, if 7-1 then 2-2). All three teams would have 5 points, but Peru is eliminated on the first tiebreaker since it would not have a +6 GD (lol). Ecuador and Brazil would then both be tied on GD and GF (with at least 8 each), and it would go to head to head. But since their head to head match was tied, we draw lots! Whoever "wins" the lot would have the pleasure of facing Colombia in New Jersey while the "loser" would come to Seattle to face the USMNT.

The second scenario in which teams would draw lots for 2nd is if Ecuador beats Haiti and Brazil-Peru ties, but Ecuador only gets a 1-goal win over Haiti and only scores one more goal on Sunday than Peru. (1-0 and 0-0 would do it, or 2-1 and 1-1).  Brazil would win the group on GD and then as Peru and Ecuador would have essentially identical records and tied their head to head match, we'd see lots drawn for second with the winner in Seattle and the loser going home.

Personally, I think you make both teams show up and then hold a PK session a couple hours before the game to determine who plays. MUCH better than drawing lots.

I estimate the likelihood of this scenario at .01 Dempseys/2

Brazil would find itself in a likely rainy Seattle in two scenarios. The first and most straightforward scenario is if they lose to Peru while Ecuador ties or loses to Haiti. In that scenario, Peru wins the group with 7, Brazil advances on 4 points, and Ecuador and Haiti are limited to three points maximum.

There is a very slim chance that Ecuador can win the group with Brazil in second. You would just have to tilt the above Lots scenario a bit in favor of Ecuador. A 7-goal win over Haiti would do it (with the tie), or winning the Goals Scored tiebreaker (6-0 win with a 0-0 tie). Obviously far fetched, but crazier things have happened. This is the only way Ecuador can win the group outright, by the way.

I estimate the likelihood of this scenario .29 Dempseys/2

Ecuador is probably the likeliest to end up in in Seattle. First, Ecuador has to beat Haiti (a probable result). Then a win by either team in the Brazil - Peru match. Either Brazil or Peru would win the group with 7 points, then Ecuador would be 2nd with 5 points.

Of course, Ecuador could sneak into second with a win over Haiti and a Brazil-Peru tie where Ecuador wins the tiebreaker over Peru.  That would require a 2-goal or better win by Ecuador or a 1-goal win in which they win the Goals Scored tiebreaker, similar to the Lots scenario above for winning 2nd place.

Ecuador actually does control its own fate.  If Ecuador wins by at least two goals, they hold the tiebreaker over Peru, forcing Peru into a win or go home scenario.

I estimate the likelihood of this scenario 1 Dempsey/2

Peru could revisit Seattle in a small number of scenarios.  It first requires Peru to lose or tie; if they win the game they win the group.  If they lose, they need Ecuador to lose or win to maintain second place.  If they tie, they would need Ecuador to lose or tie, or to hold the tiebreaker over Ecuador.  This would require a 1-goal win by Ecuador and Peru to score at least the same amount of goals as Ecuador.  In these scenarios, Peru would come second either on points or GD, with Brazil advancing in first.  There is no scenario in which Peru advances in second with Ecuador in first.

I estimate the likelihood of this scenario at .7 Dempseys/2

So here are your scenarios for tonight, hopecast as you wish.  See you all on Thursday.