Editor's note: This is some impressive research.

This week, Sounders genius Jeremiah Oshan wrote an article about the Seattle Sounders’ penchant for snapping long unbeaten streaks. This spurred a comment discussion about whether the Sounders are better at this than other teams, in which one defeated commenter said it would be virtually impossible to figure that out. Today, I break my own streak of contributing nothing more than obsessively-worded comments and seek to tackle this tough question: which teams are the best at breaking unbeaten streaks?

Here’s how I did it. The aforementioned commenter was right, that the historical W/L/D data league-wide is not available for public consumption (as far as I can tell). However, MLSSoccer.com does have a filter-able schedule, and I have R. It’s about time I put those two things together! After a bit of rvesting, I created a single data file of every result known to MLSSoccer.com from 1996-2017 spanning all competitions. After subsetting to MLS regular season matches only, I looked at all unbeaten streaks of 9 or more games (overall streaks and home-game streaks, as was shown in Jeremiah’s article) including who broke the streak. Here’s the results...

Who breaks the most streaks? The below table shows the number of streaks (overall and home) of 9+ games broken by each team. Teams which have never broken a streak are not listed. Former teams (like Tampa Bay Mutiny) are. Note that the total is just the sum of the two columns; some overall streaks are also home streaks but I didn’t put in the effort to figure that out.

It turns out the Chicago Fire are really good at breaking home unbeaten runs (9). Next are the Vancouver Whitecaps (7 home streaks broken) and the Sounders are tied for third (6) along with three other teams. Considering overall streaks, Real Salt Lake has the highest total broken with 7, followed by the Colorado Rapids (5), three teams tied at 4 and Seattle and six other times tied at 3. So, the Sounders are pretty good at breaking unbeaten runs, but not necessarily the best. Let's hope we get to move up in the rankings this weekend!

What does this mean to me? "Trap games" break streaks. Teams tend to snap their unbeaten runs (especially home unbeaten runs) when facing traditionally low-performing teams like Chicago and Vancouver (sorry to my friends in those cities). In fact, it was Vancouver who broke our 14-game home unbeaten run in 2013. It also, of course, helps to have been around for a long time, as evidenced by Chicago, RSL and LA. Actually, if we just look at streaks broken since 2007, the Sounders are number 2 in home streaks broken (6), behind Vancouver (7), and number 3 in overall streaks broken (3), behind RSL (6), SKC, LA and FCD (4).

Just for fun though, let’s look at the Sounders more closely. Jeremiah’s article provides plenty of highlights, but here’s a table of all the streaks broken by our favorite team:

A few notable differences between Jeremiah’s article and this table. First, the 2014 RSL streak we snapped actually dates back into the previous season for a total of 16 games, not the 12 cited in the article. We also broke DC United’s 12-game home unbeaten run in 2009, as well as FC Dallas’ 9-game overall unbeaten streak in 2013. I didn’t include Colorado’s 18-game home run here because we broke that one in the playoffs, and it’s still going among regular season games. Lastly, Orlando had an impressive 17-game home unbeaten run spanning 2015-2016, which we broke on August 7, 2016.

-Edit- An astute reader pointed out that besides total number of streaks broken, it might be interesting to examine win percentage when given the chance to break a streak. In other words, if we face a team "mid-streak", how often do we win? Looking at it this way, the Sounders are arguably the best. When the Sounders face a team who is sitting on 8 or more consecutive unbeaten games (which has happened 11 times not including home winning streaks), we win 45.5% 50% of the time, or 5/11 6/12 tries [updated 3/19/2017]. This is second only to NYCFC, who has an impressive 100% record in their three chances to beat a streaking team. After the Sounders, Real Salt Lake has a 35.3% winning history against teams who are mid-streak (out of 17 chances), and Montreal has a 33% winning history against mid-streak teams (out of 6 chances). The bottom of the barrel (just for kicks) are San Jose (1/13, or 7.7%) and Toronto (1/14, or 7.1%).

In the 6 times we failed to break our opponents' winning streak, you could, to some extent, say that it was because our opponents were particularly hot at the time. When we've lost, our opponents went on to have especially long unbeaten streaks: the average streak length of mid-streak opponents who beat us was 13.8 games. That's 4th overall, behind Atlanta (18), Colorado (14.3) and Vancouver (14.2), but Atlanta doesn't really count because they've only had one try. This means that we might be even better at breaking streaks than that 45.5% winning record shows, because the times that we've failed were against very good opponents. -end edit-

Finally, it’s also kind of interesting to look at all streaks league-wide. Here are a few fun graphs: 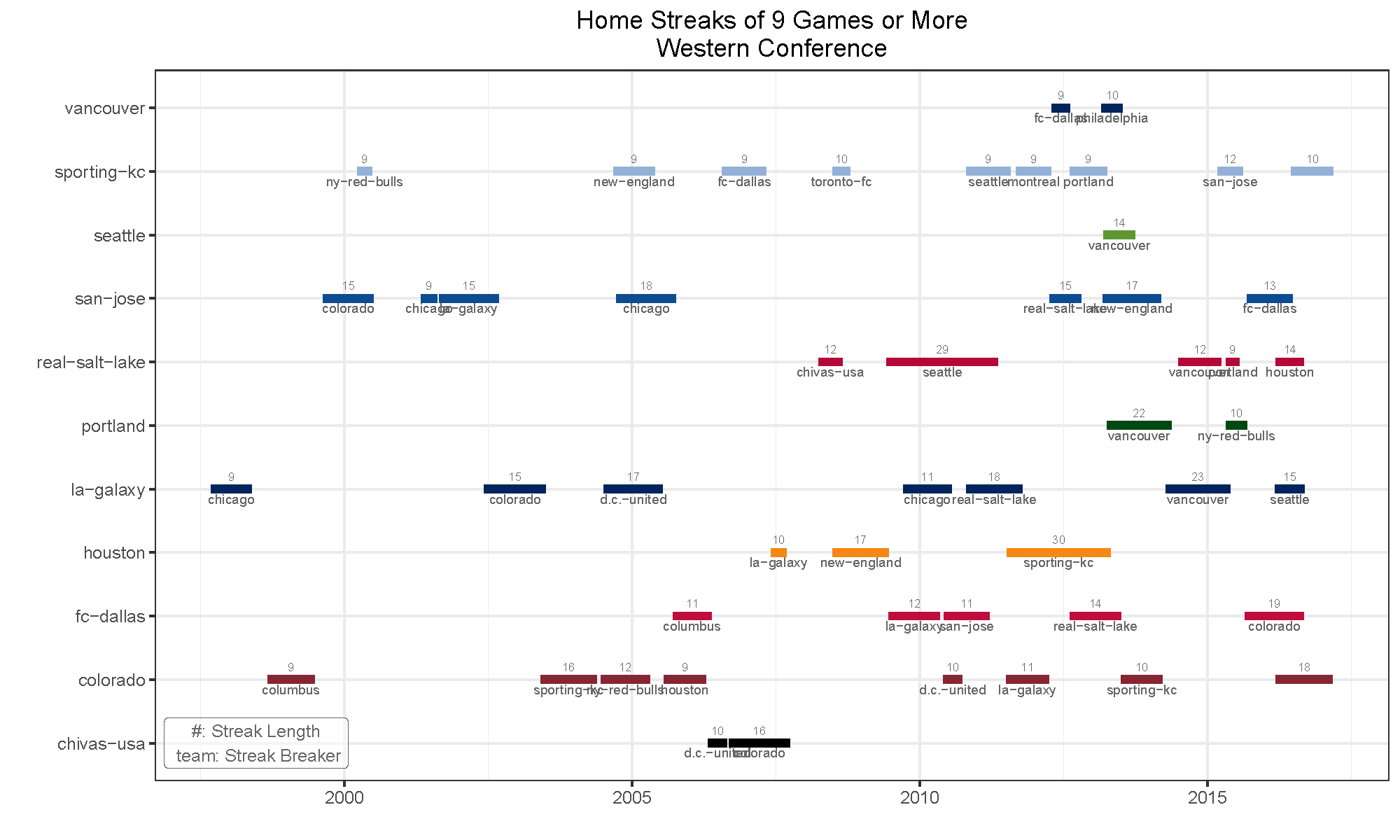 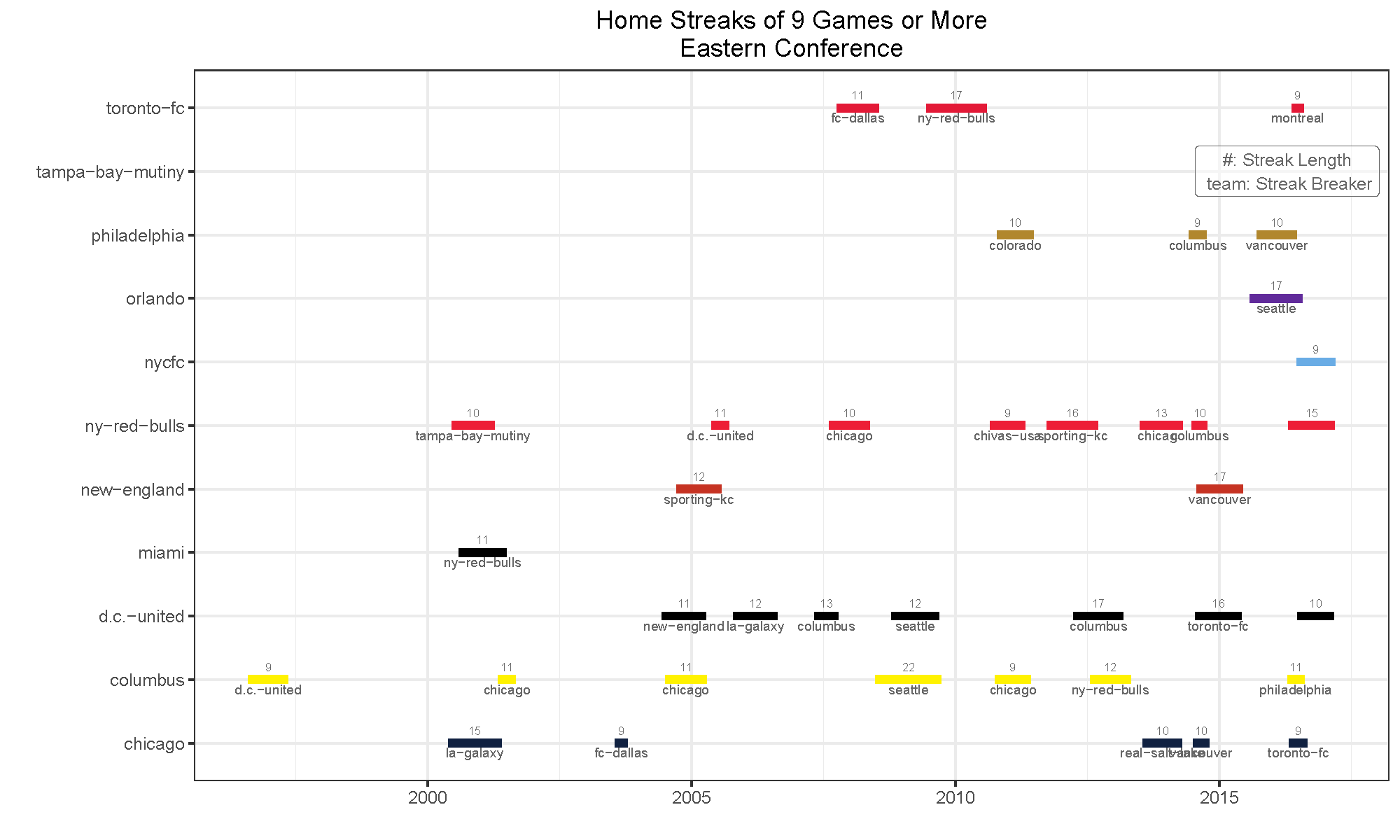 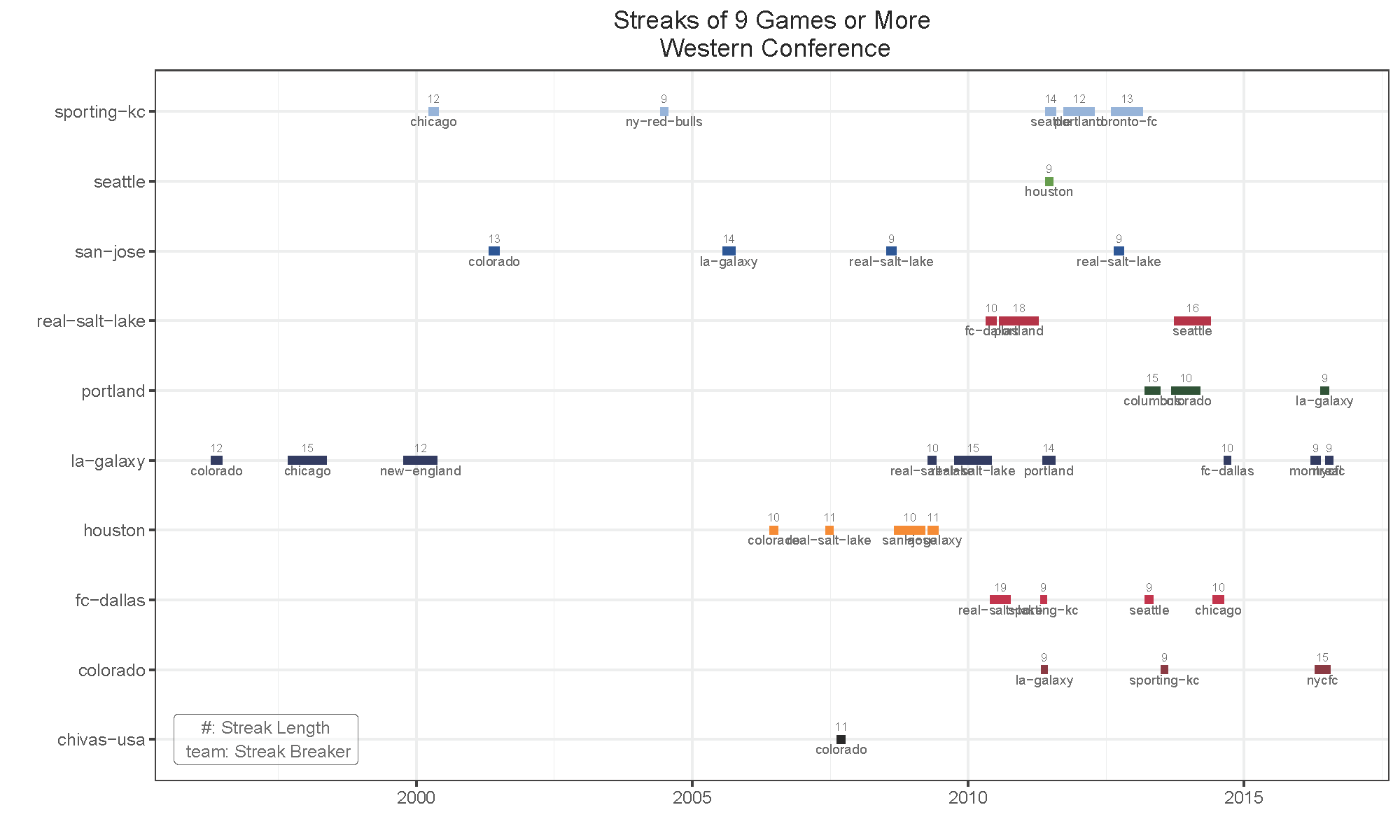 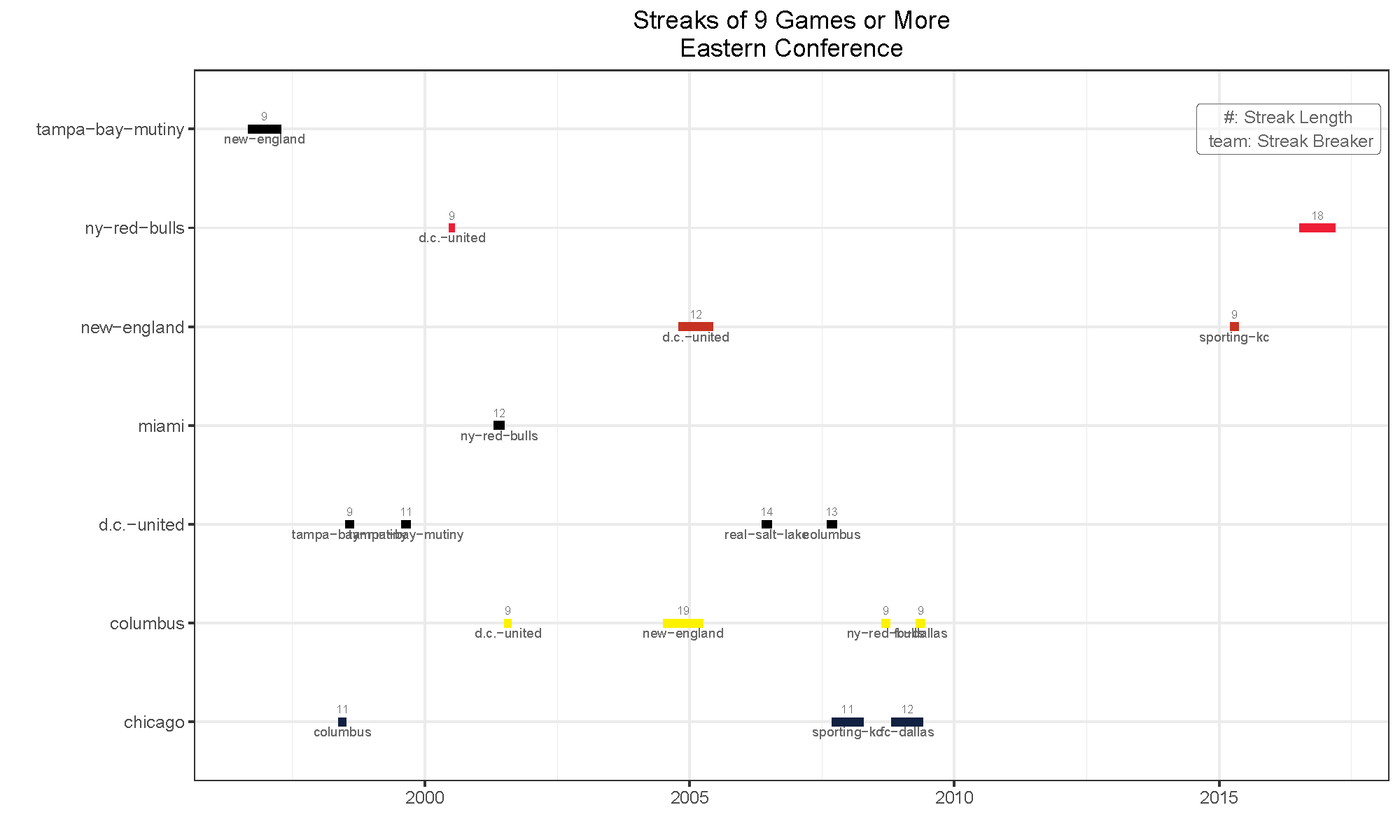 One last note: this means I now have a big dataset of all MLS results throughout history. It even includes other competitions like preseason, CCL, All-star games, open cups, etc. I’m open to other analytical requests!