Last week, I wrote my first fan post. It was an analysis of the Sounders’ knack for ending other teams’ unbeaten streaks. As it turns out, we’re pretty good at doing that, and (just to prove a point) we went out and broke New York Red Bulls’ 18-game unbeaten streak the next day. ICYMI, the good guys won 3-1 on the turf we know so well, in front of our newly-unveiled MLS Cup banner, and amid the fervor of 45,000+ supporters. That got me thinking, did any of those things play a part in the win?

I admit, I once doubted that home field advantage even existed… until I started paying attention. Over the past 21 years, away teams have won only 27% of their games, whereas home teams have won 53% across all competitions. But this, friends, is a Sounders fanpost. What I really want to know about is the home field advantage at CenturyLink Field. Is C-Link really a fortress like people say? Let’s find out.

Using data dating back to 1996 from MLS regular season, playoffs, the last two CCLs and USOC, we can look at simple tabulations. Who has the highest home-win percentage? At first glance, LA Galaxy lead the league with a 62.3% home win record. The Sounders are close behind, at 62.1%. There’s a big gap between us and the rest of the league, with FC Dallas coming in at third with 55.3%, then 12 more teams in the mid 50’s, 4 in the 40’s and Toronto FC at 39.7%. Here’s a graph: 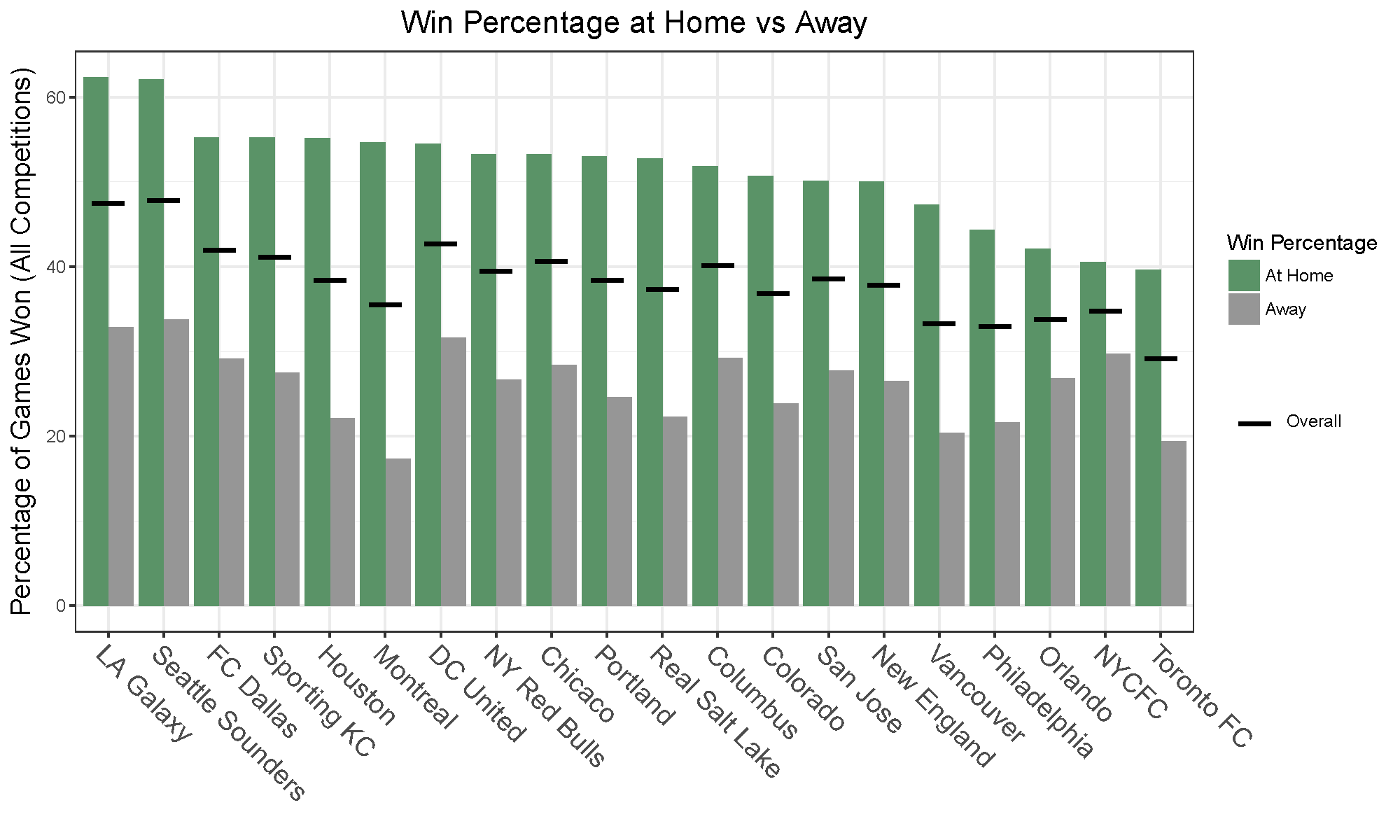 It’s clear that LA and Seattle win at home a lot, but we also just win a lot in general. In fact, you can see from the black bars on the graph that teams which are typically top competitors are generally near the top of home win percentage and vice versa. Does C-Link have a strong home field advantage, or are the Sounders just good? A way to get around this dilemma is to look at the ratio between home (green bars) and away (grey bars), like this: 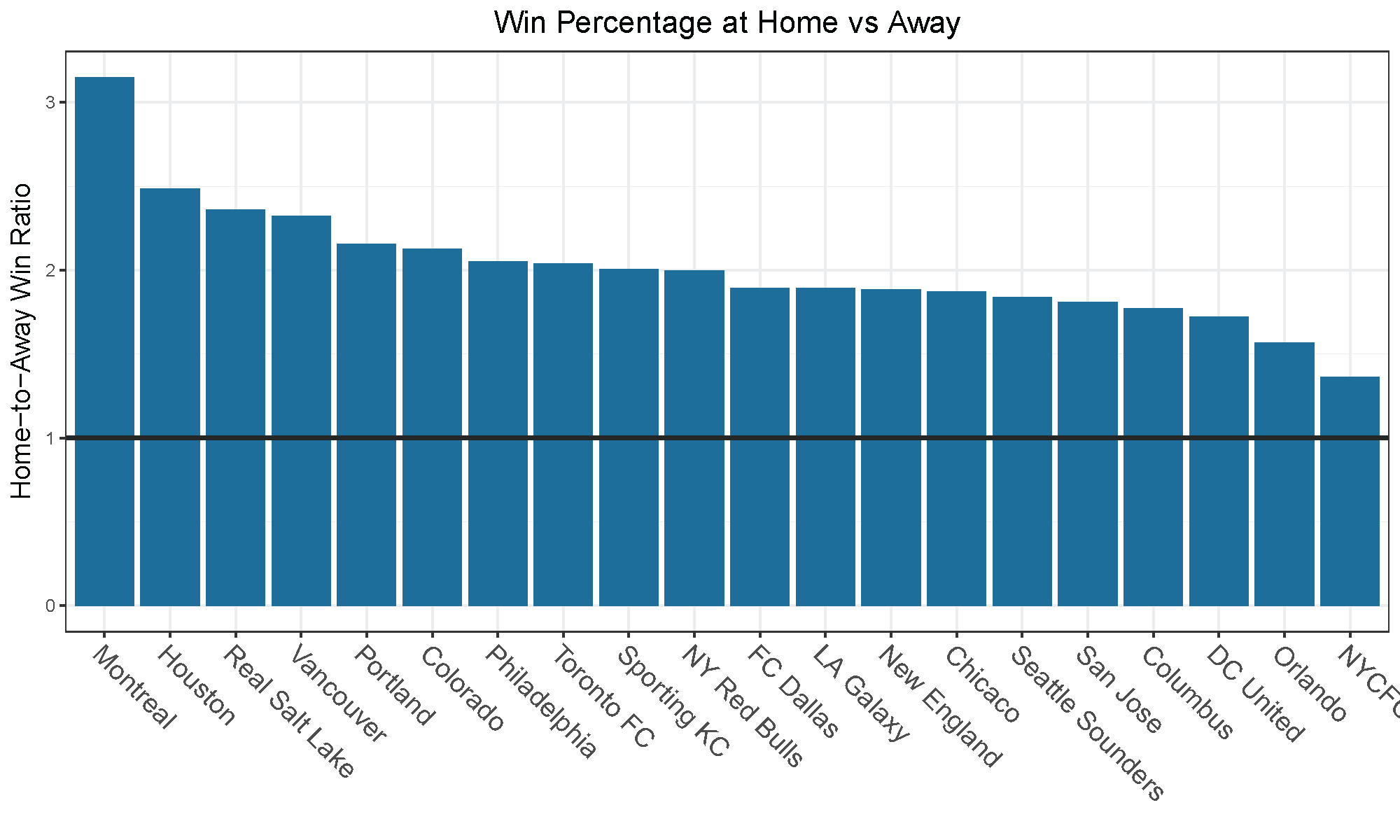 This graph shows how much more each team wins at home than away. It tells a very different story. Montreal, who was in the middle of the first graph, now stands out because they’ve won over 3 times as many games at home than away. Houston, Real Salt Lake and Vancouver are the next highest, and now the Sounders are close to the bottom. What gives? Just like the first graph was confounded by how good a team is, this one is confounded by how bad a team is. Maybe the general tendency of Montreal (say, on a neutral field) is to lose or draw, and their home field advantage is just enough to tip the scales. Does that mean they have the strongest home field advantage? To put it another way, a really good team won’t have a huge ratio because they’re going to win lots of away games too. Does that mean they don’t have a strong home field advantage?

We need to control for how good a team is. But how to measure it? There are lots of ways to measure the strength of a team, but the one that’s most readily available to me is points. If I take a moving average of a team’s points in a wide-but-not-too-wide window (here I used 20 games), that should be a pretty good indicator of how good or bad each team was at any given time. The results are kind of fun to look at: 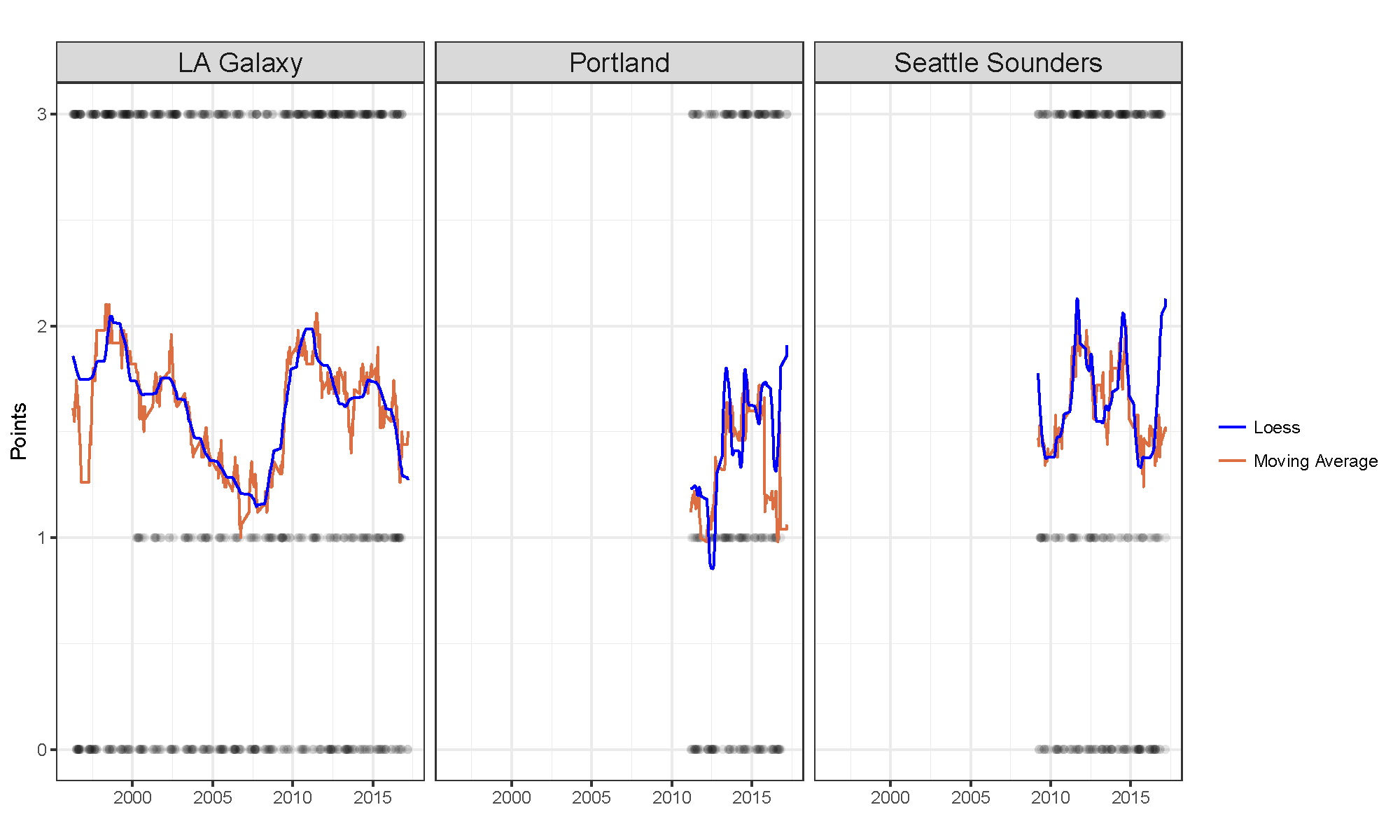 The blue line is Loess, just a smoother line. You can see all the ups and downs in our history compared with two other teams (the full graphs are at the end of this article). The little grey dots are our wins, draws and losses, and the moving average gravitates up or down when we’re playing well or poorly.

Now to measure home field advantage controlling for team quality. I used logistic regression to measure the odds of winning at home, adjusting for the moving average (MA) term for each team. For my statistically-oriented friends, that’s an interaction between a binary indicator of whether a team (t)’s match (m) was played at home interacted with team-level fixed effects:

If that means nothing to you, don’t worry. The point is that every team has an underlying probability of winning, and that probability is modified by playing at home. This regression measures that excess probability. Here’s the results (not showing beta_0 and beta_1): 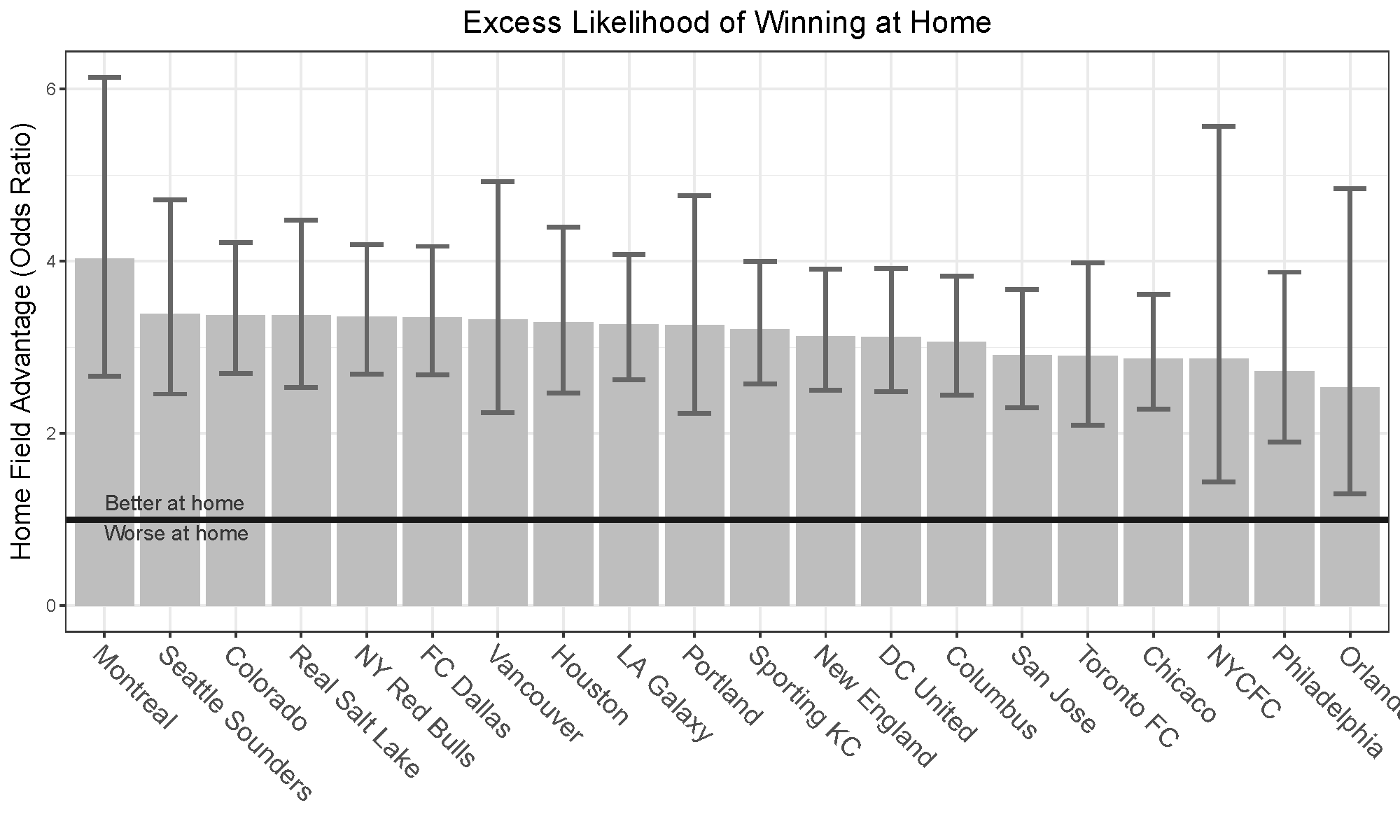 New York Red Bulls make a good example of why it’s important to control for points. They’re in the middle of the pack on the first two graphs, but high on this one. When you take into account how good they are in general, they (like the Sounders) have done an impressive job at performing above their level at home, meaning a strong home field advantage. LA Galaxy are the opposite actually. Despite having the best home-win percentage, they’re in the middle of the pack when controlling for points.

So what does this mean? Is Century Link Field a fortress? The homer in me says yes; we have the second-best home field advantage in MLS. The statistician in me says maybe; we do have the second-highest estimate, but it’s not statistically significant compared to our peers. As time goes on, we’ll get a clearer picture.

I’ll leave you with some final things to consider. These results are over the entire history of each team. But could home field advantage evolve over time? If I limit the results to 2012+ for example, Montreal drops from 1st to 6th, FC Dallas take the lead, and Seattle stays at number 2. But what does home field advantage mean anyway? Is it just more wins or is it "bigger" wins (i.e. blowouts). Another way I could have looked at this was goal differential at home vs away, in which LA Galaxy are the leaders with a mean home GD of +0.9, and the Sounders again are second at +0.89 (Portland was a distant number 3 with +0.7). The fact that we keep coming up high is reassuring, I think. There are, to say the least, problems with this analysis (don’t get me started on correlated residuals). But I think we can safely conclude that the Sounders are better at home, and that the advantage of playing at Century Link Field is better than most. 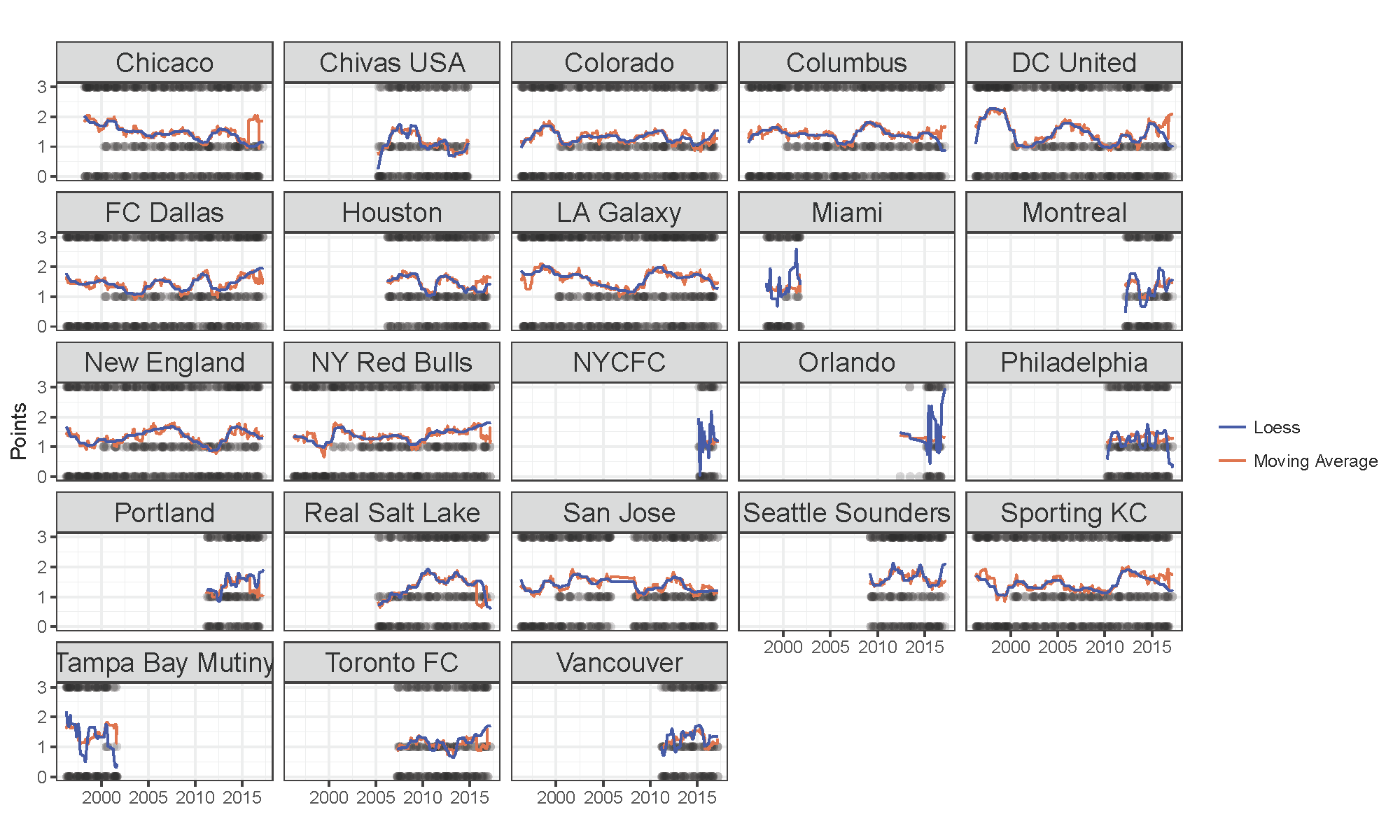 Editor's note: We promoted this FanPost.