tl;dr: Orlando in the East. And, you guessed it, San Jose in the West.

Hi folks! I'm back with Sounder Data. In this semi-regular fanpost, I use data, statistics and visualizations to explore some of the trickier questions about the Sounders and MLS.

Over the weekend, we saw a frustrating 1-1 road draw against the San Jose Earthquakes. We also saw the grim statistic after the game was over: San Jose committed 18 fouls to Seattle's 6. I, like many supporters, promptly grumbled to myself that San Jose always does that. "I bet they commit the most fouls in the league", I said. If only I had data on that...

I didn't have said data at the time. So, I did what I usually do and wrote a script that goes out and acquires it! Now I have a big crazy dataset of everything you can find in a "boxscore" page (besides Opta stats) of every MLS game dating back to 2013. They don't seem to save boxscores before that.

So who's the dirtiest team? Well, it depends on what you mean by "dirty":

Most fouls per game: Sporting KC. They've committed an average of 13.9 fouls across their 147 games (including post season) since 2013. That's not wildly higher than most teams; Orlando is right behind them with 13.7 fouls per game across 72 games. SKC are, interestingly, the only team who has committed more than 2,000 fouls since 2013, a total of 2,048 fouls to be exact.

Yellow cards per game: Orlando with 2.13 per game. This one's close too, with NYCFC at 2.1 per game across 75 games. Montreal have earned themselves a whopping 287 yellow cards since 2013 (the highest numerator in the league), which puts them in third with 1.9 per game.

Penalty kicks conceded: The award for this one goes to Portland by a fairly wide margin. The Timbers concede 1.7 PKs every 10 games (0.17 per game) across their 145 games since 2013. That's a total of 25 times (I can't help but laugh a little) that our neighbors to the South have shot themselves in the foot in 4 seasons plus the current one. Next closest is NYCFC with 1.6 PKs per 10 games.

Second yellows per game: This is a close one between Montreal (0.67 per 10 games) and Colorado (0.65 per 10 games). These are apparently really rare; there have only been 97 of them since 2013 across the 22 teams. Portland interestingly have the lowest rate: only 1 in 145 games.

Straight reds per game: This honor again goes to Orlando who are way ahead of the pack at a rate of 1.4 per 10 games. Second in this category is the subject of our collective anger this weekend: San Jose. The ‘Quakes have 16 straight reds in their last 135 games, or 1.2 horrific fouls in every 10 games.

Just for fun, here's a graph of all the results. I even included a plot for who suffers the most fouls because I could: 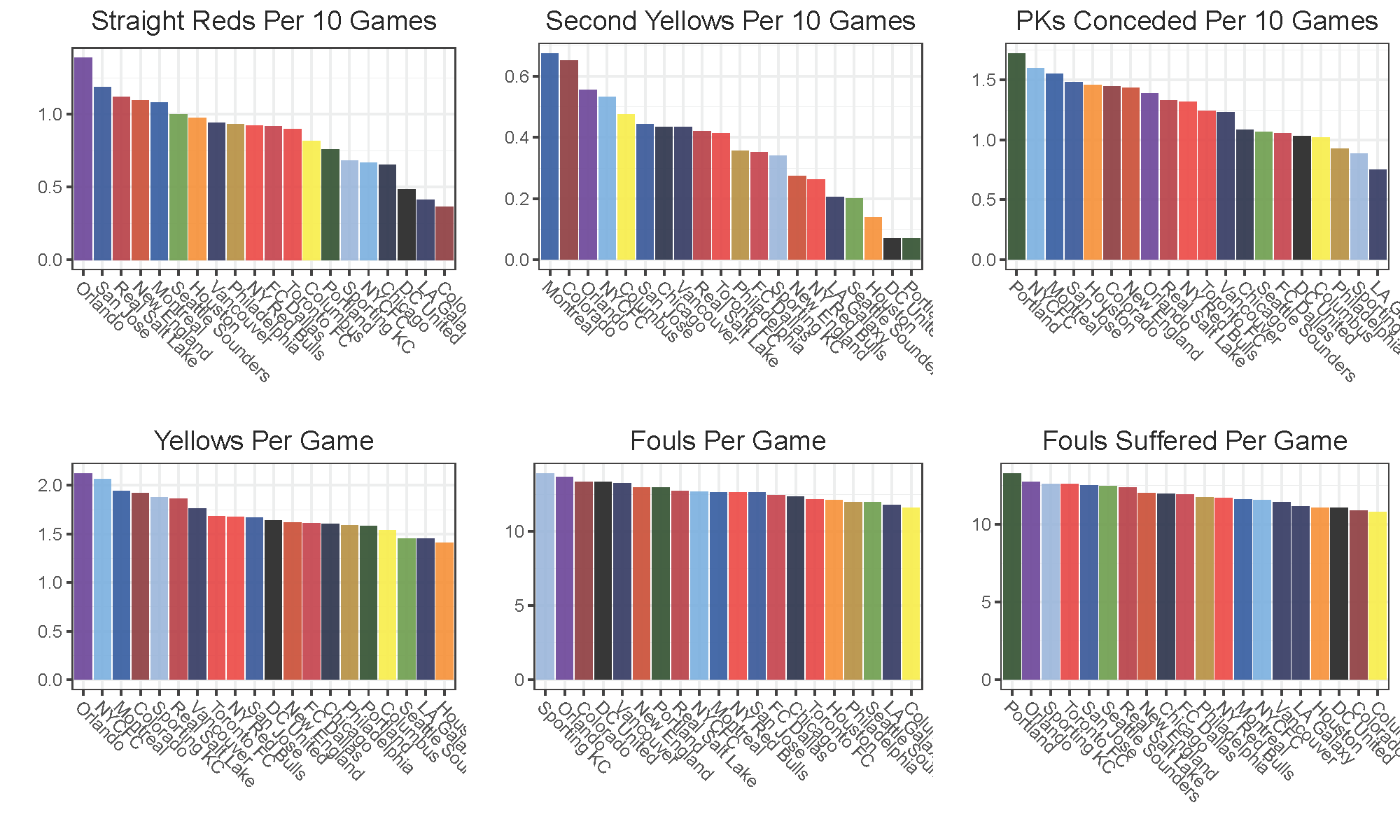 I want a single answer though. Who's the worst? It’s kind of hard to decide whether straight reds are "dirtier" than second yellows or PKs, so I’ll just assume they’re all equally bad. With that, I can rank every team on each category, then sum their ranks and rank them once more, like in this table:

The winner? Orlando. Second place goes to Montreal, third is NYCFC. Fourth place, and first in the Western Conference, is… San Jose. You’ll be happy to know that the Sounders are the second "cleanest" team in the league too by the way, one place up from LA.

I should point out that there are some problems with looking at simple rates like this. The main one I can think of is referee confounding. The assignment of refs to games is clearly not random (though I adamantly believe it should be). For example we got Alan Kelly and Ricardo Salazar for 5 games each last season, but never saw Ted Unkel or Silvio Petrescu once, among others. I’ll show this in a future post, but some refs call way more fouls than others, so maybe Orlando isn’t dirty, they’ve just been systematically assigned the card-happy referees? That hypothesis probably doesn’t explain it all, because they’ve had a pretty even distribution of refs over their short history.

I can't say anything about bad calls here either. With second yellows (and to a lesser extent PKs and straight reds) being as rare as they are, just a couple of bad calls or bad no-calls could tip the scales. Of course, the box score just shows what went into the books, so there's no way to know (and it's quite subjective anyway) if any teams are subject to more or fewer illegitimate calls than others.

So there you have it. Orlando commits the most fouls across all categories in the East, San Jose commits the most in the West. Next time an "Ultra" tries to tell you you’re just a homer, show them the data!