Postgame Pontifications: Not even close to good enough

Injuries were a reason to fail to advance, but they don’t explain away this performance.

Share All sharing options for: Postgame Pontifications: Not even close to good enough

I’ll maintain that these are perfectly valid things to point out in putting their 3-0 loss to Chivas Guadalajara into context.

But that does not excuse the performance. The Sounders managed to get to the half still clinging to a 1-0 lead, with reason to think they could weather the oncoming storm. They didn’t. They didn’t even come close.

The first Chivas goal can perhaps be excused. The foul that led to it was hardly clear cut and the free kick from Oswaldo Alanis was absolutely stunning. It happens.

But that doesn’t explain how they allowed Chivas to score a virtually uncontested goal when they had five (!!!) defenders plausibly positioned to disrupt it, or how they never really threatened to score one of their own at any point.

The second half, in particular, speaks to a certain inability to adapt to a changing gamestate or even a willingness to attempt to play Chivas straight up. The Sounders managed to complete just 56 percent of their shockingly low 257 passes in the game. It’s the kind of performance you’d expect from a Central American opponent with a fraction of the Sounders’ resources, not one you’d hope to see under any circumstances from a club that claims to want to be among the best in the Western Hemisphere.

The performance is also part of a worrying trend, that goes back to at least the MLS Cup final, that the Sounders don’t seem particularly capable of putting together a respectable performance on the road. In those three important road games they’ve been out shot 55-17, out-possessed by an average of 58-42, and out-dueled 155-109.

Were they simply outclassed? I don’t think so. In three home games against comparable opponents — or quite literally the same in two cases — the Sounders have out-shot their opponents 53-21, out-possessed them 56-44 and out-dueled them 186-155.

I suppose the shots and possession stats could be chalked up to normal home/road splits when playing comparable opponents — though I’m skeptical of this argument — but the duels seem to tell a different story. That the Sounders are simply entering about 25 fewer duels per road game suggests that there’s a completely different tactic at play, one that discourages players from contesting as many balls. 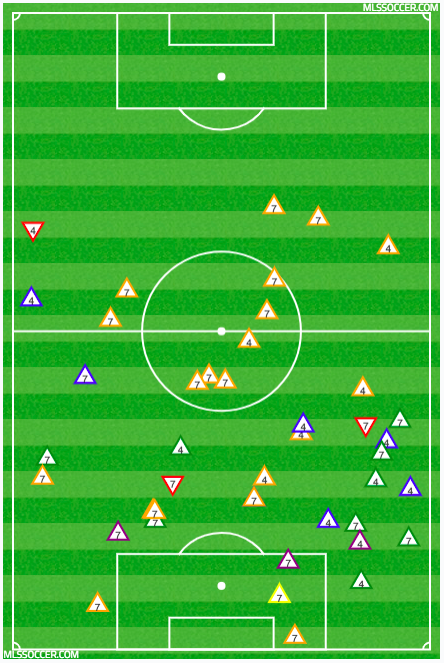 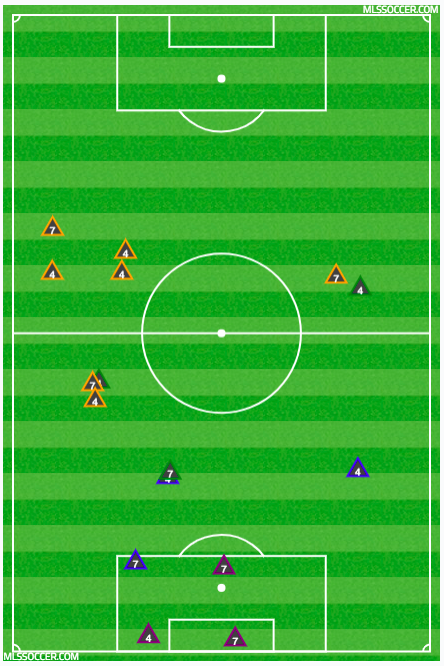 Svensson and Roldan didn’t suddenly become bad players, and it wasn’t like Chivas was using a beefed up midfield in one game. They simply appear to have gotten less aggressive. It’s fine for a coach to have different tactics at home and on the road. I’d go as far as saying it’s normal. But the tactics can’t be THAT different if you want to compete for something like CCL, or, frankly, MLS Cup.

In postgame comments, Brian Schmetzer insisted “the Sounders will always play to win games.” While that’s a great platitude, that intent was nowhere to be seen.

There’s no doubt that losing Will Bruin so early and then Chad Marshall a bit later changed the Sounders’ game plan. Maybe they were doomed regardless.

But the decision to bring in Lamar Neagle and move Clint Dempsey to forward seemed to exacerbate the problems the Sounders were perhaps already destined to have. Neagle brings energy and some aerial ability, but he’s not someone who’s going to help the Sounders keep possession. If he had moved to forward and been tasked with haranguing the back line, maybe he’s effective. Moving him to midfielder had the double-hit of making it harder for Dempsey to get touches and putting Neagle in a less effective spot.

As it turned out, Neagle completed just 9 of 16 passes and had just six positive defensive actions. He was hardly unique in his ineffectiveness, but he was further illustrative of the Sounders’ struggles.

It’s entirely possible that Schmetzer didn’t think he could trust Harry Shipp with 80 minutes at altitude. At the same time, you have to wonder if Shipp would have been able to help the Sounders possess the ball just a bit more and relieve some of the pressure they found themselves under repeatedly.

It has been said by many that this game highlighted the Sounders’ desperate need for a game-changing forward. Given how little the Sounders had the ball, I’m not sure such a player would have made a huge difference in this game. I do understand the sentiment, though.

The Sounders are currently in their third transfer window without signing a Designated Player they have the ability to sign. I trust that they are working hard on signing such a player. But finding that player sooner than later has to be even more of a priority now.

Assuming Bruin isn’t out for an extended period, I could be talked into waiting until the summer transfer window for that player. But a signing in that window would need to be almost guaranteed to justify waiting until then. To some degree, the Sounders need to at least show some intent to improve. I don’t think this team has ever gone out simply intending to compete for a playoff spot. I’ve never bought into the narrative that they are mailing in the first half to focus on the stretch run.

Injuries, though, have created a bit of a crisis for the Sounders. They have the resources to address it. They should.

The game in one gif

Well, at least Clint gave us this.

Quote of the day

“Obviously we struggled tonight.” - Henry Wingo sums it up

One stat to tell the tale

0 — We’ve seen enough of Magnus Wolff Eikrem to know he’s better than he showed on Wednesday, but that he didn’t manage a single shot was indicative of his day.