What I look for: A tale of two games

With so much to see, it’s important to know what to focus on

Share All sharing options for: What I look for: A tale of two games

That certainly was a tale of two games, wasn’t it? On one hand, we had a see-saw, back-and-forth game against Dallas which came down to the wire with tons of explosive plays. On the other hand, we had a vintage Sounders game against Real Salt Lake where it felt like only Nick Rimando, doing Rimando things, was keeping us from running away with it.

No matter the game, however, there is a certain way I approach it. There are quite a few decisions to make, from where to sit, who to focus on, etc. It’s too much to cover in one article, so today will focus on the elements of the game that I always try to capture and how they apply to the articles. Since the Sounders just went through two games in just a few days, examples from both will be utilized with sliders.

Tifo displays and the supporters’ section

To start the match against Dallas, the entire Brougham End put up an impressive card display. Not knowing exactly what would be coming up, but knowing that cards were laid out across the entire side of the stadium, I made the decision to go up to the Hawk’s Nest (the other option I considered was shooting from the North End, at field level).

The smoke from the extra fireworks made it a bit challenging to do the display justice, but I felt the Emerald City Supporters did a fantastic job, especially considering the time frame they were working with. One of the designers mentioned to me that the original plan was to have the text banners touching, but I think that would have cut off the top of the Space Needle and made it harder to recognize.

With only three days between matches, there simply wasn’t time for anything intricate. Instead, the ECS went with a tried and true method against Real Salt Lake: color, and lots of it.

Scarves for everyone? You got it!

Flames and Stefan Frei? Well... that one’s not ECS, but you have to admit, that all makes for a pretty daunting wall for an opponent to face off against to start the game. 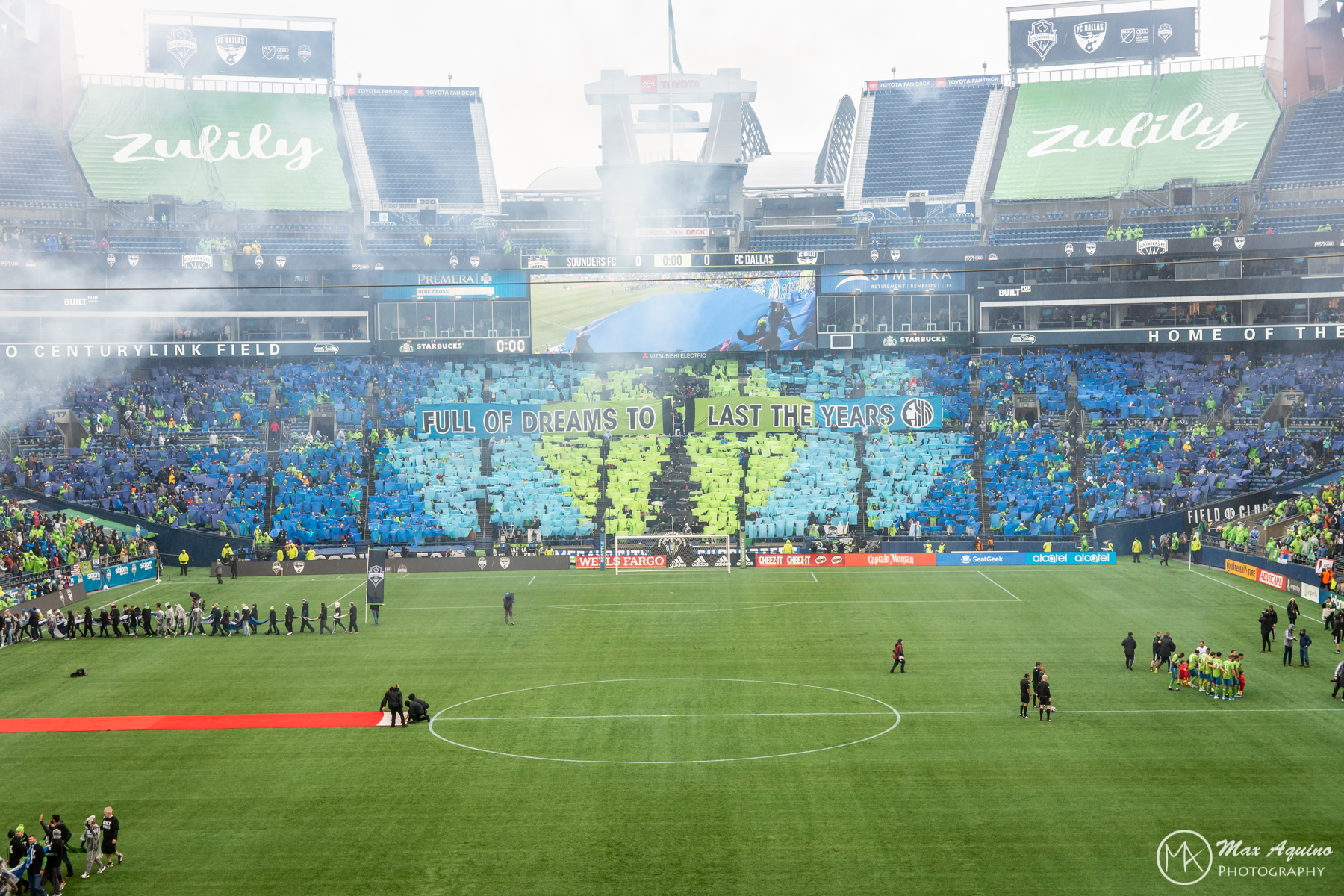 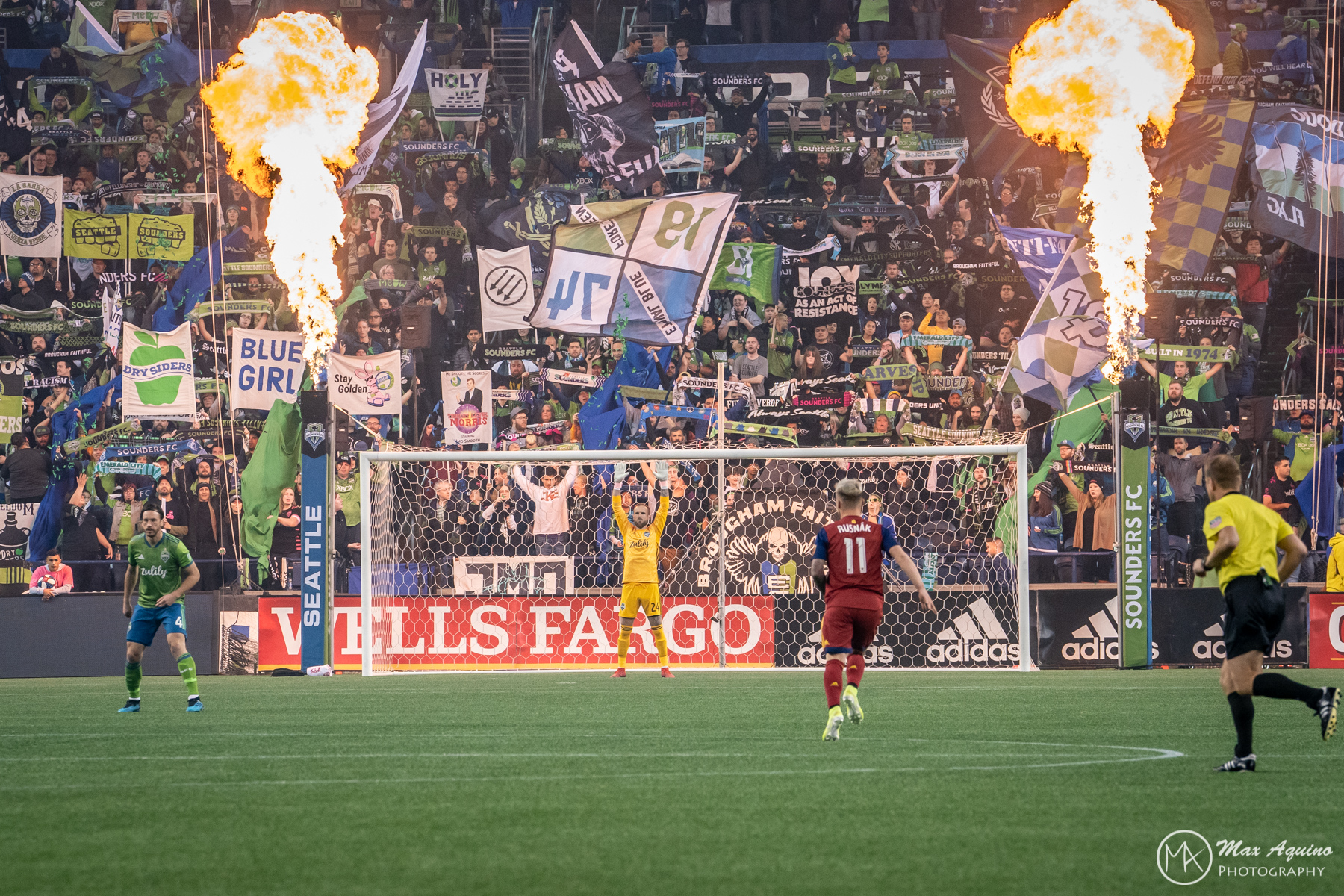 With that said, ECS couldn’t resist bringing out an oldie, but goodie during the 11th minute while singing “Roll on, Columbia.” Who can blame them? After all, we’re the Seattle Freakin’ Sounders.

With the Seahawks starting up, we’ve had a return of the Snake Pit. This season, ECS utilized it in the second half of each game to fly the big flags up and down, J-League style. 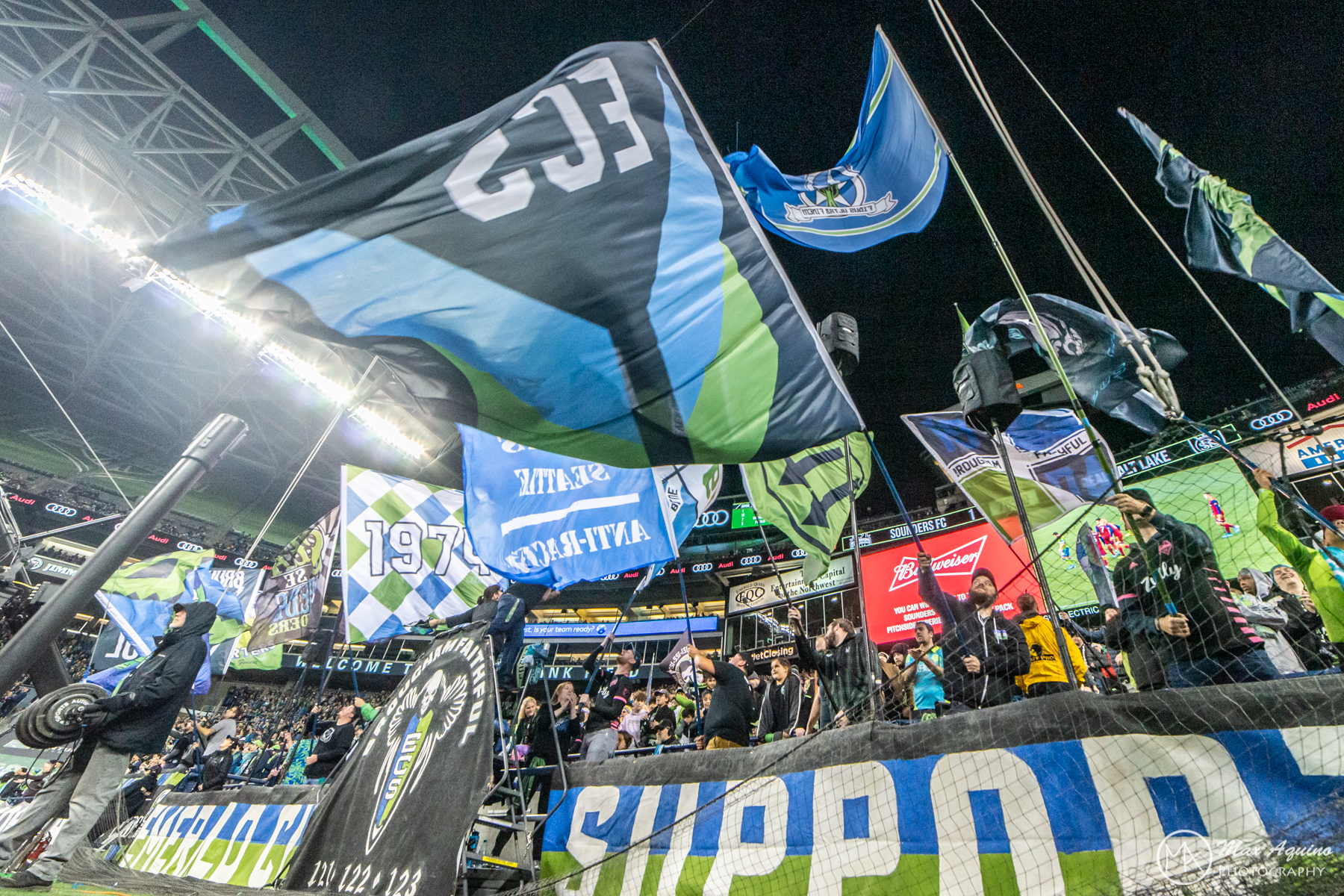 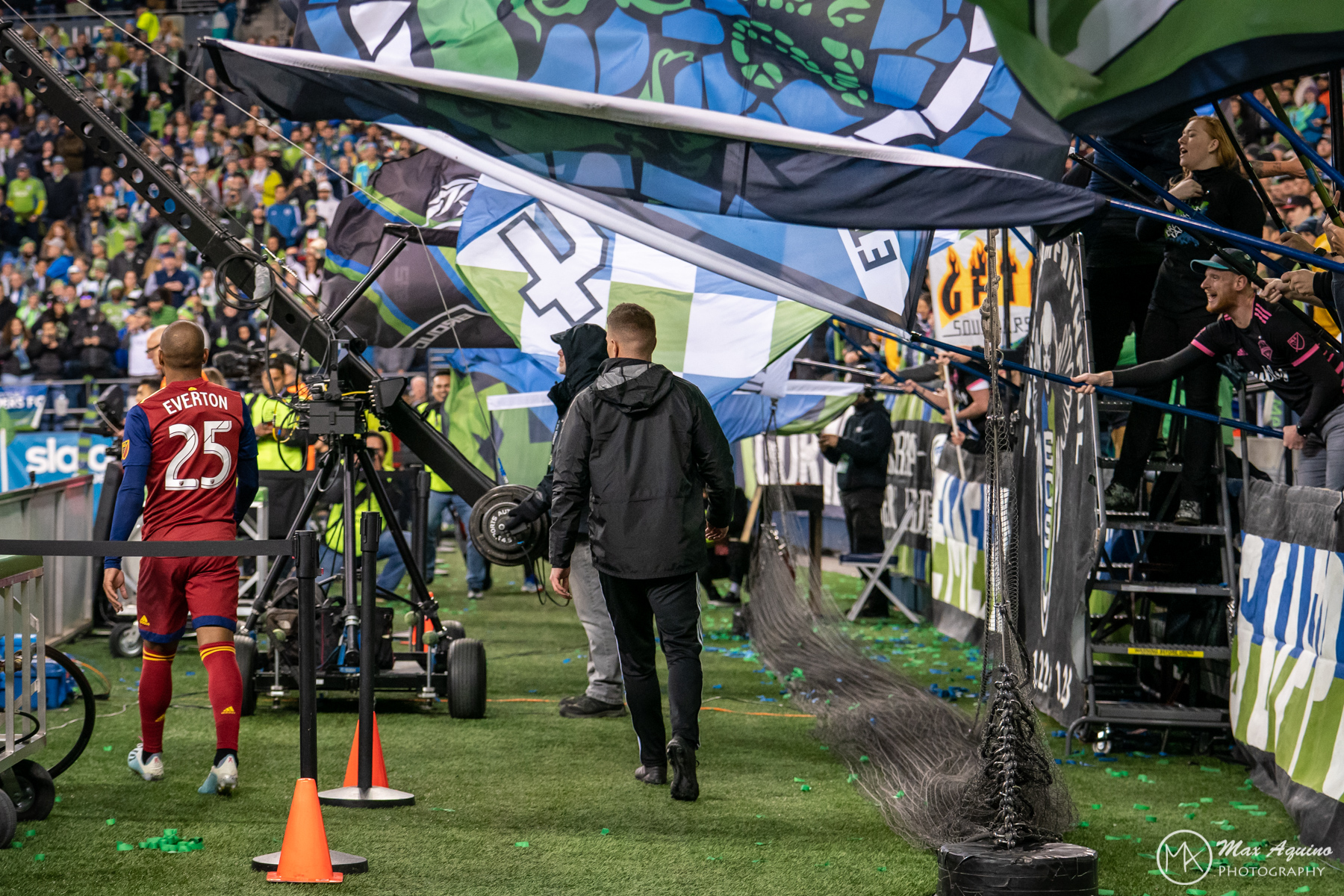 A video of the color in action. Side note, Everton Luiz tried to walk between the boards and the goal, but stadium security made him walk past ECS. I’m pleased that neither side did anything to escalate the situation.

Word of advice: if you've been red carded from the game, don't walk in front of an opposition's Supporters Group. pic.twitter.com/SsvQvPsj7L

It may seem odd for me to look for this, but part of the job of a sports photographer is to understand two things: the target audience and how to tell a story in one photo.

At Sounder at Heart, it’s pretty obvious that the target audience is “Sounders fans” (as opposed to somewhere like the MLS league site). As such, I need to minimize the focus on opponents and maximize focus on the Sounders. In general, if the opponents score, showing our team frustrated is going to be more useful to the site than the opponents celebrating.

However, I can’t wait for the end of the game, as there’s no guarantee I can get a crucial photo taken, edited, and uploaded in time if my writers are trying to get their recaps up quickly. As such, I choose several moments which could sell a loss quickly, if it comes to that, and make sure they are up by halftime. 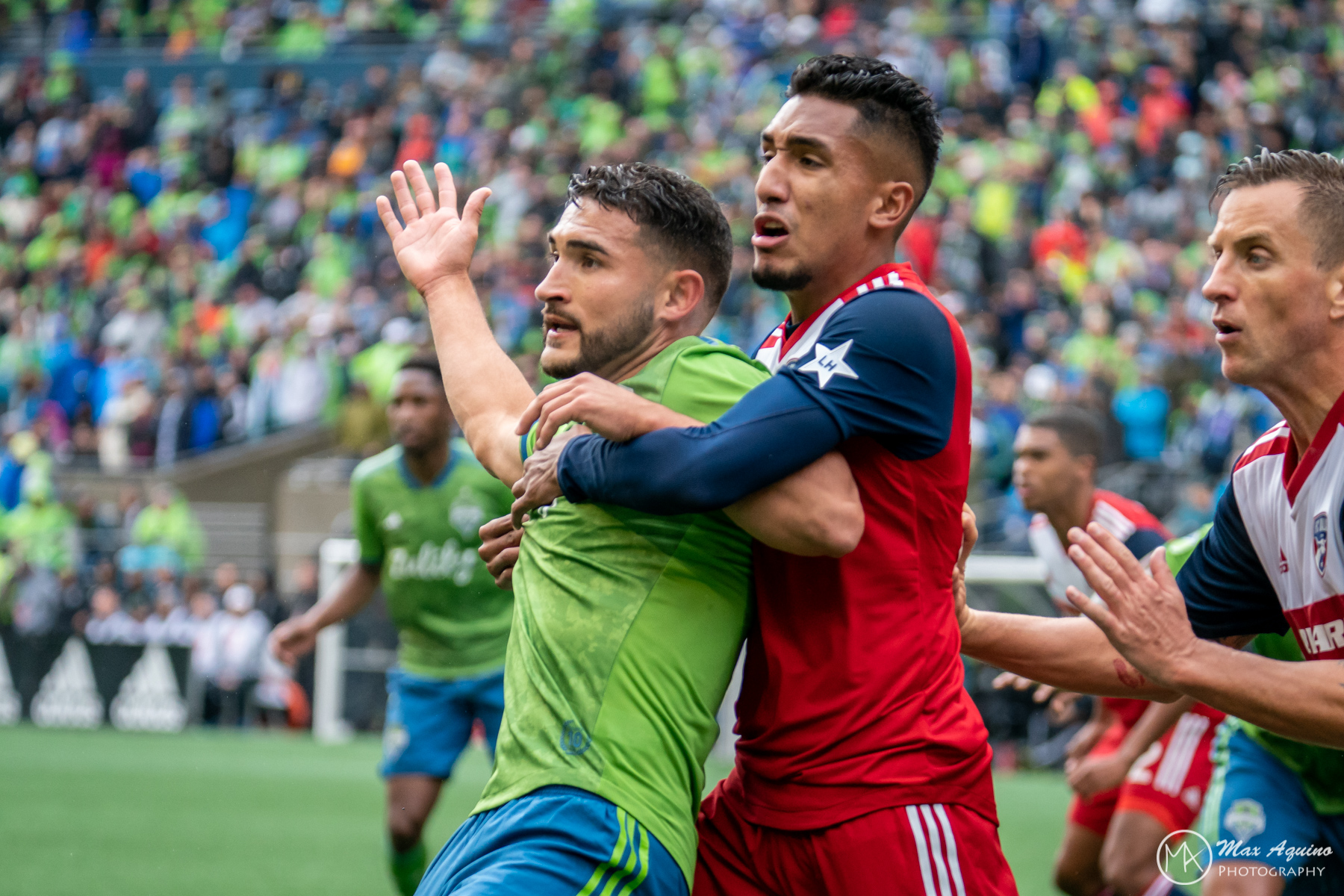 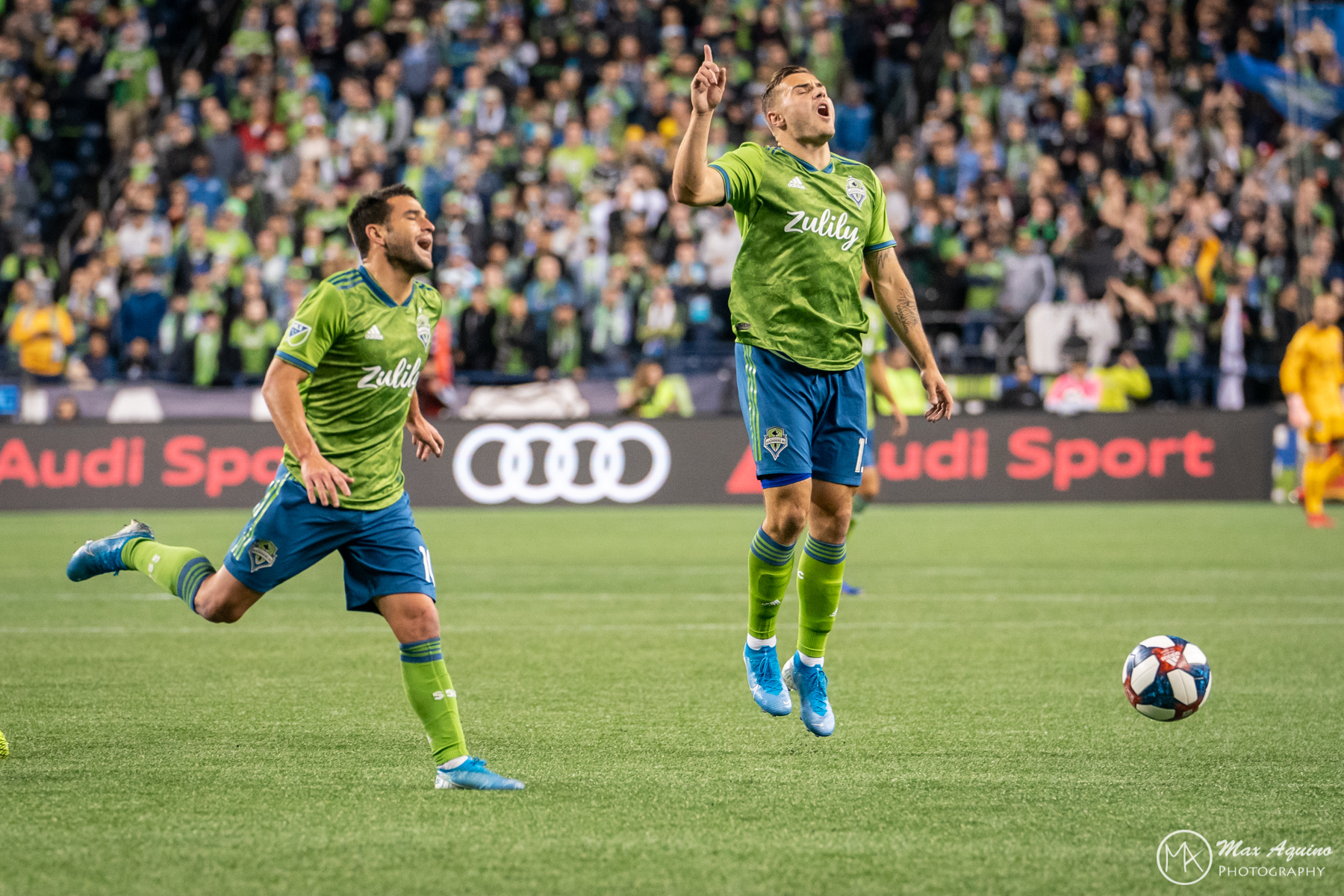 I won’t go too much into these, as they really aren’t all that interesting, but they’re still important. Stories of interest pop up throughout the season, whether it’s a newsworthy bit about them or perhaps Realio or someone else analyzes the importance of their play and decides to feature them in his ratings article. These require more emphasis on the player, instead of the moment, and usually I make an effort to ensure there are no opposing jerseys are in the shot (these are not supposed to be time-sensitive). 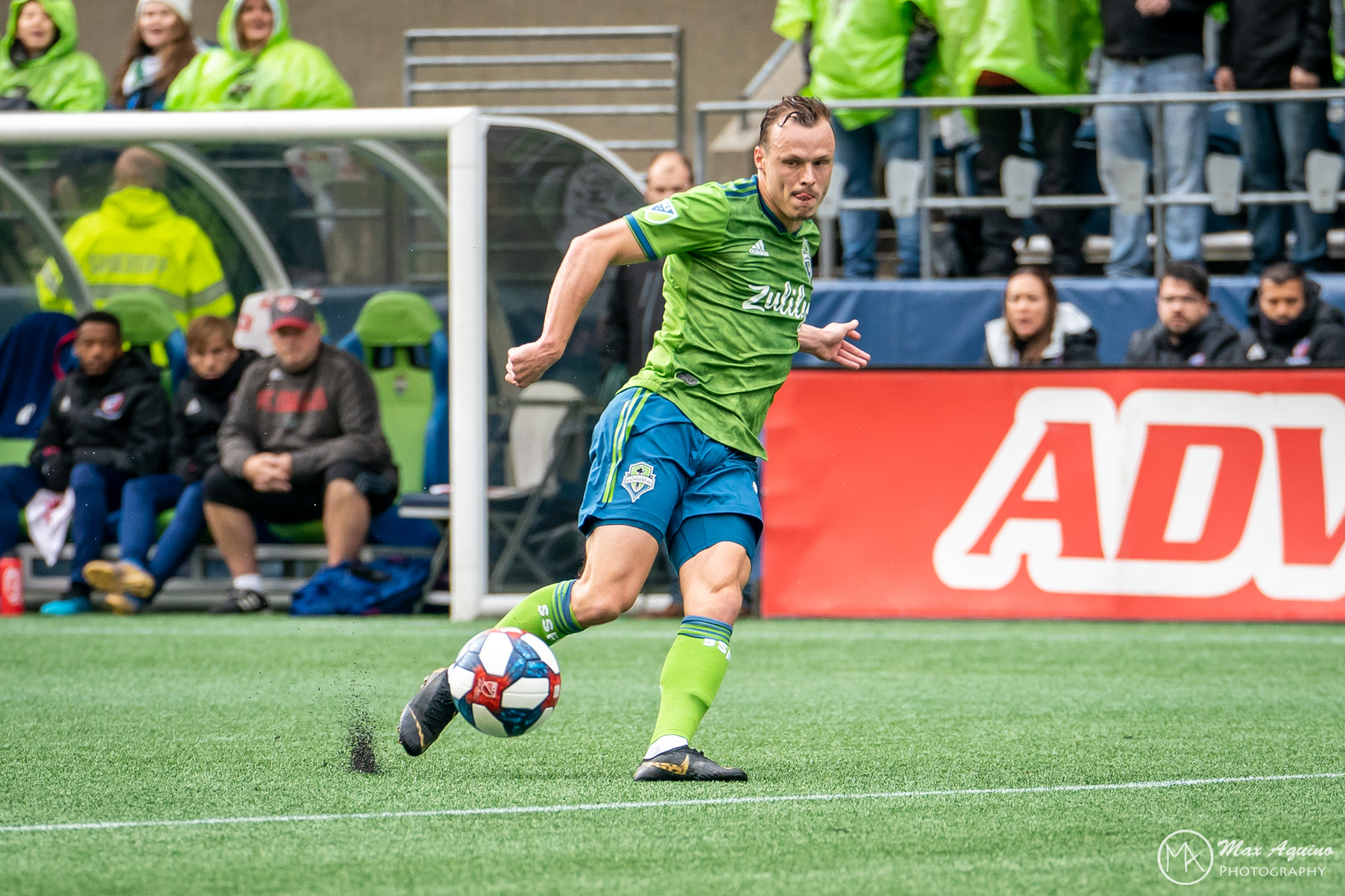 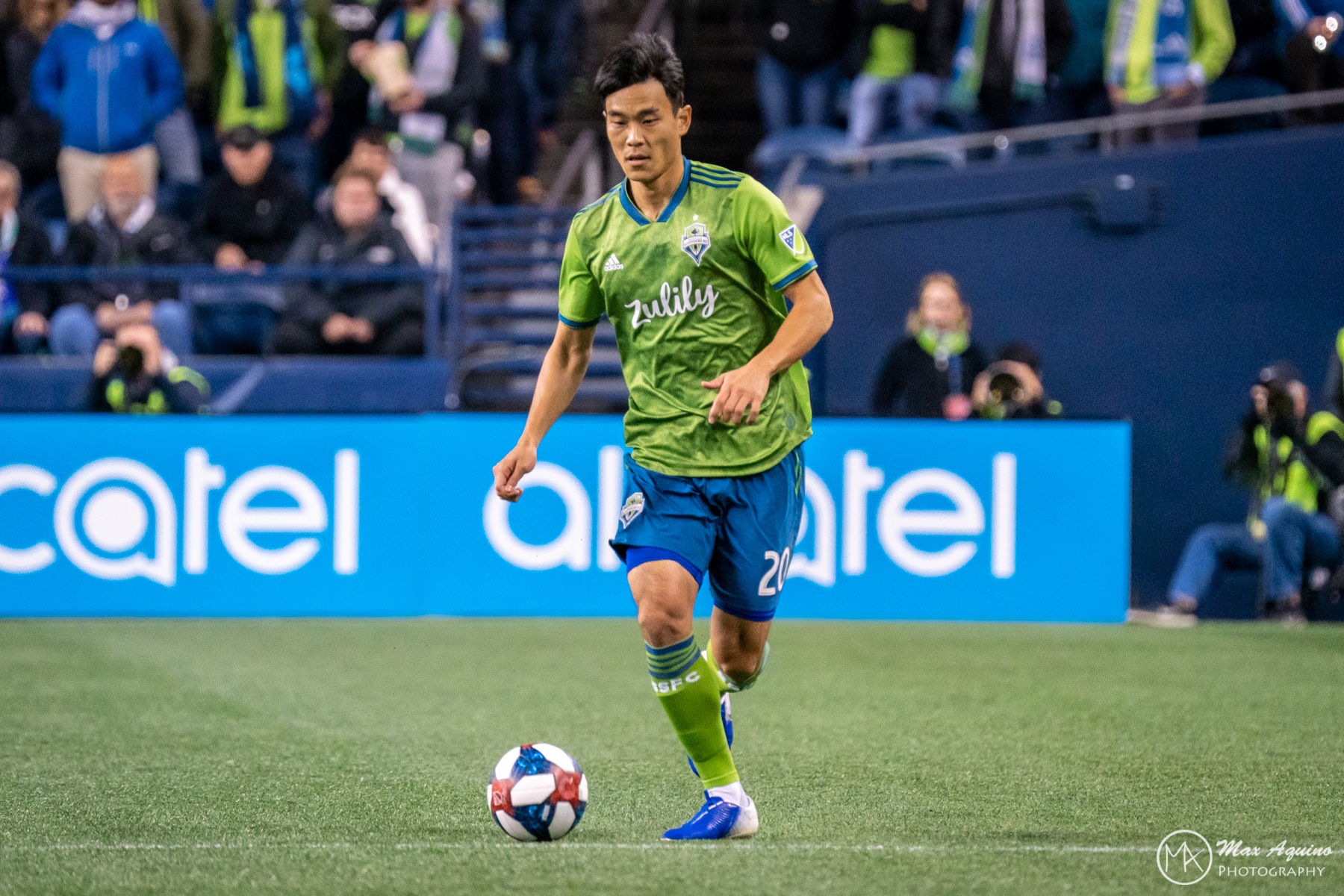 These photos are more time-sensitive, as they are usually only useful for about a week, both immediately after the game and leading up to the next time we play a particular opponent. They focus more on moments (even if they aren’t game-changing). They’re much more useful for recaps and game analysis than the stock photos. 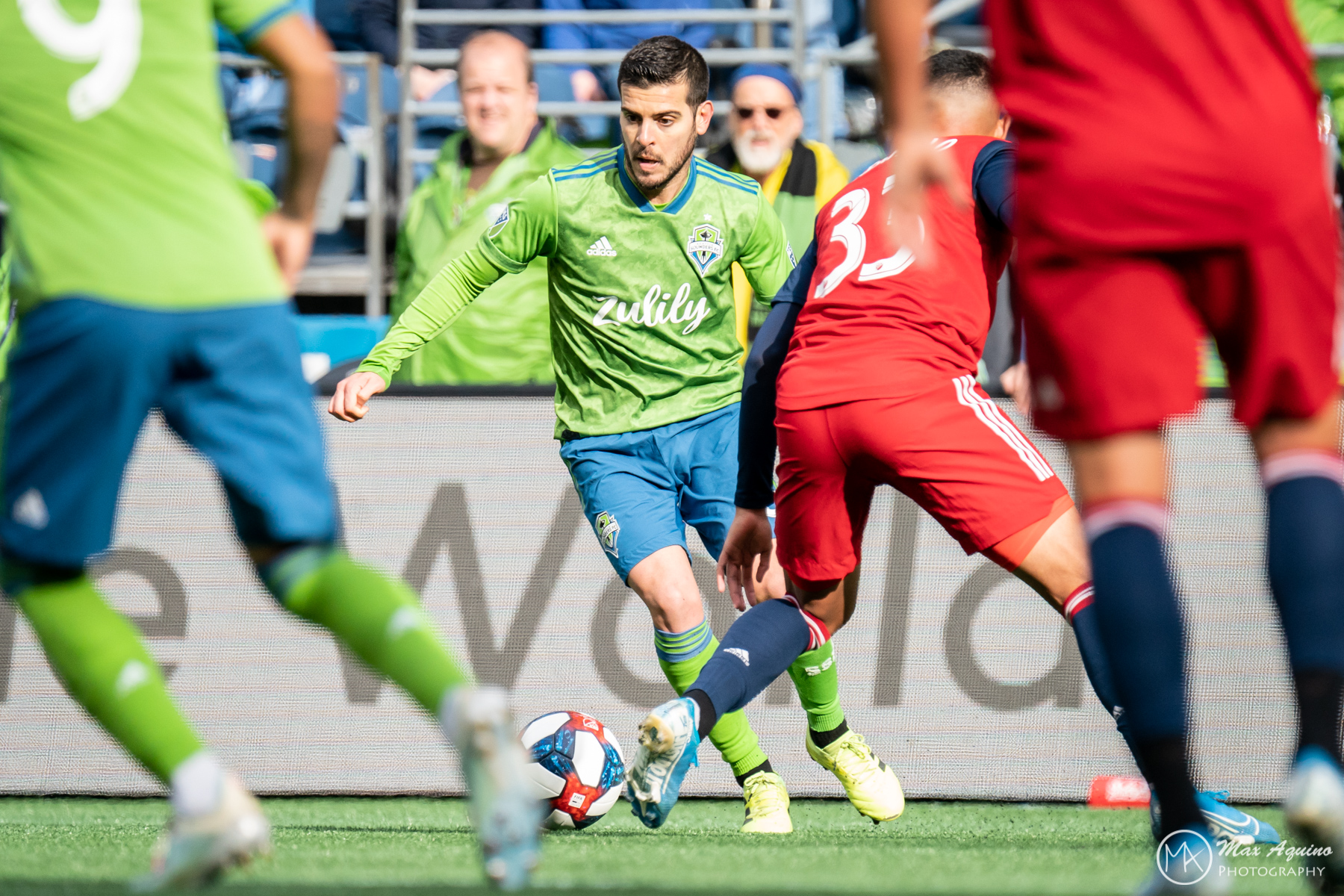 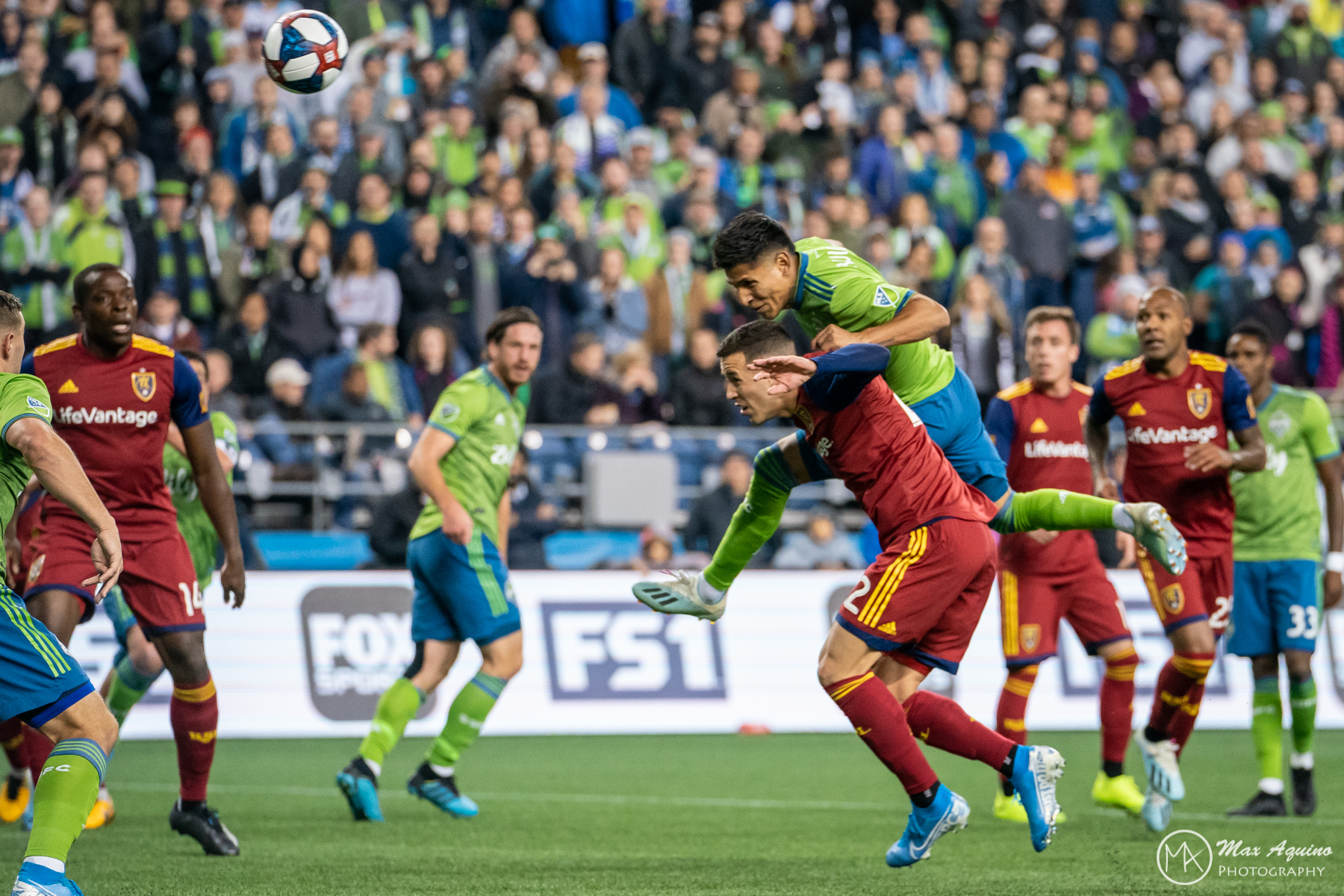 Now, we’re talking! If these appear on the front page, it usually means we took home three points (or, in this case, advanced to the next round). As with most elements of a game, celebrations have different types of photos.

Group photos are what most people are going to get. Players clump in a hurry, usually around five seconds, and these photos are fantastic for both recaps and later analysis articles. They don’t require any specific faces (although it’s best if you can get the goal scorer for recap purposes). 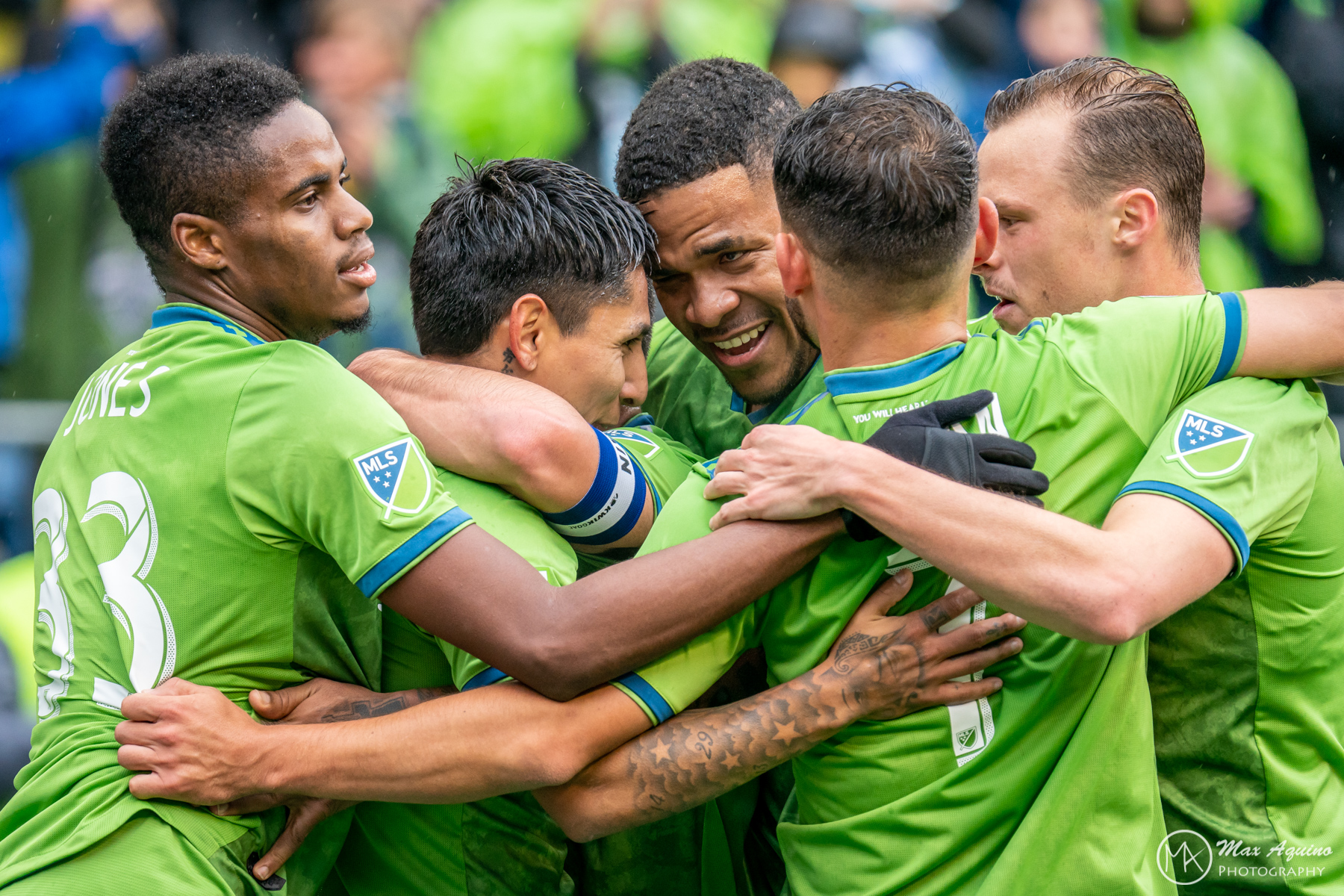 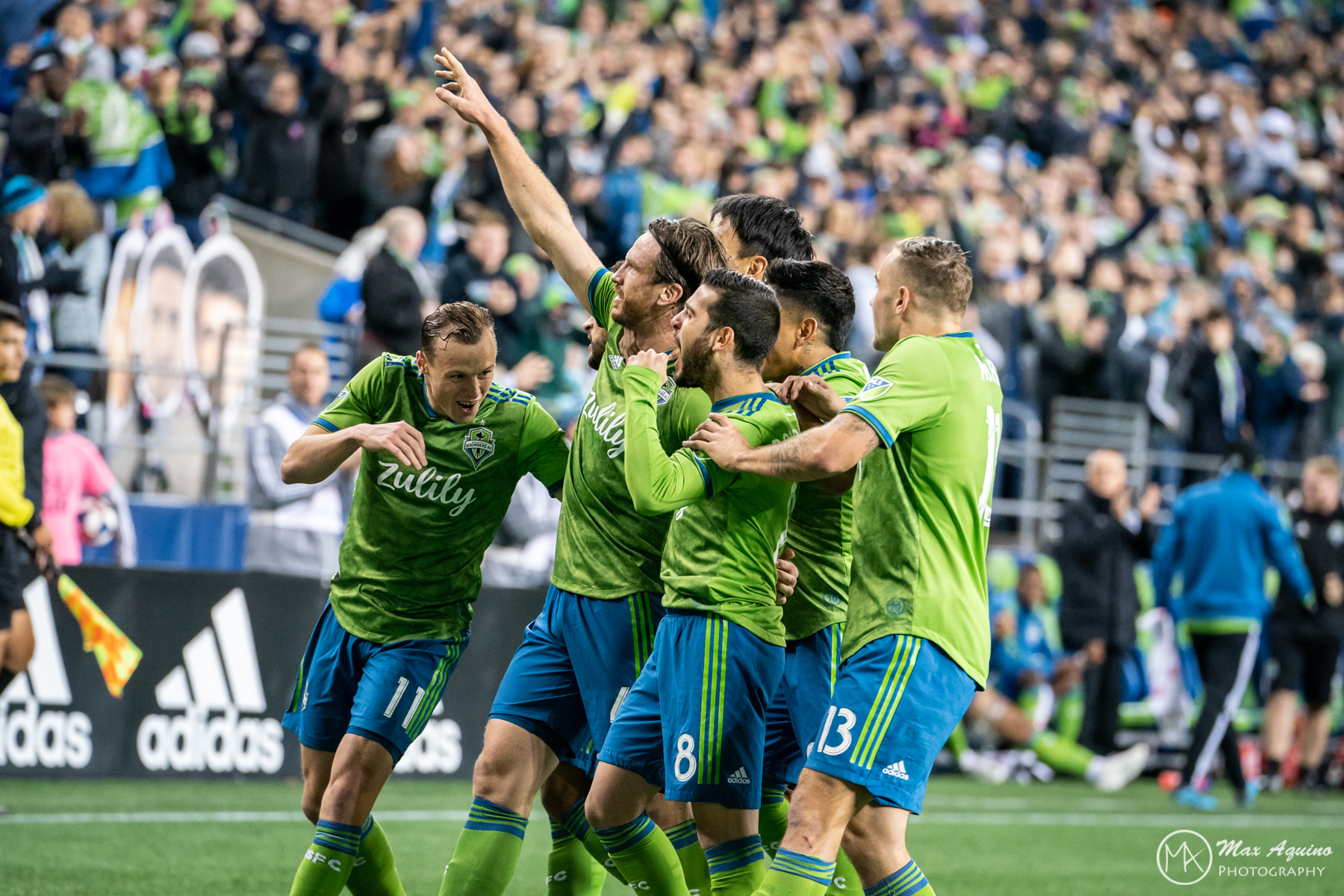 The iconic shots, however, are individuals. Individuals are tougher — there’s just no way around it. When an individual scores a goal, they usually go running to a corner. If they come running toward you, you’re going to get a great shot (assuming, of course, you can lock your focus in time). If they go running away from you, your best bet is to put on your running shoes and try to get the group shot. The earlier in the celebration, the more emotion you’ll usually get.

Neither of these photos are iconic, as in both cases, the players ran in an opposite direction from me. However, they still highlight the goal-scorer and work great in articles. The photo of Raul Ruidiaz was immediately after he broke away from the group celebration and the photo of Lodeiro was taken right after completing his goal-scoring dance (lovingly designed by his son) as he revved up the crowd again before going over to Alan Kelly to receive his yellow card for removing his shirt. 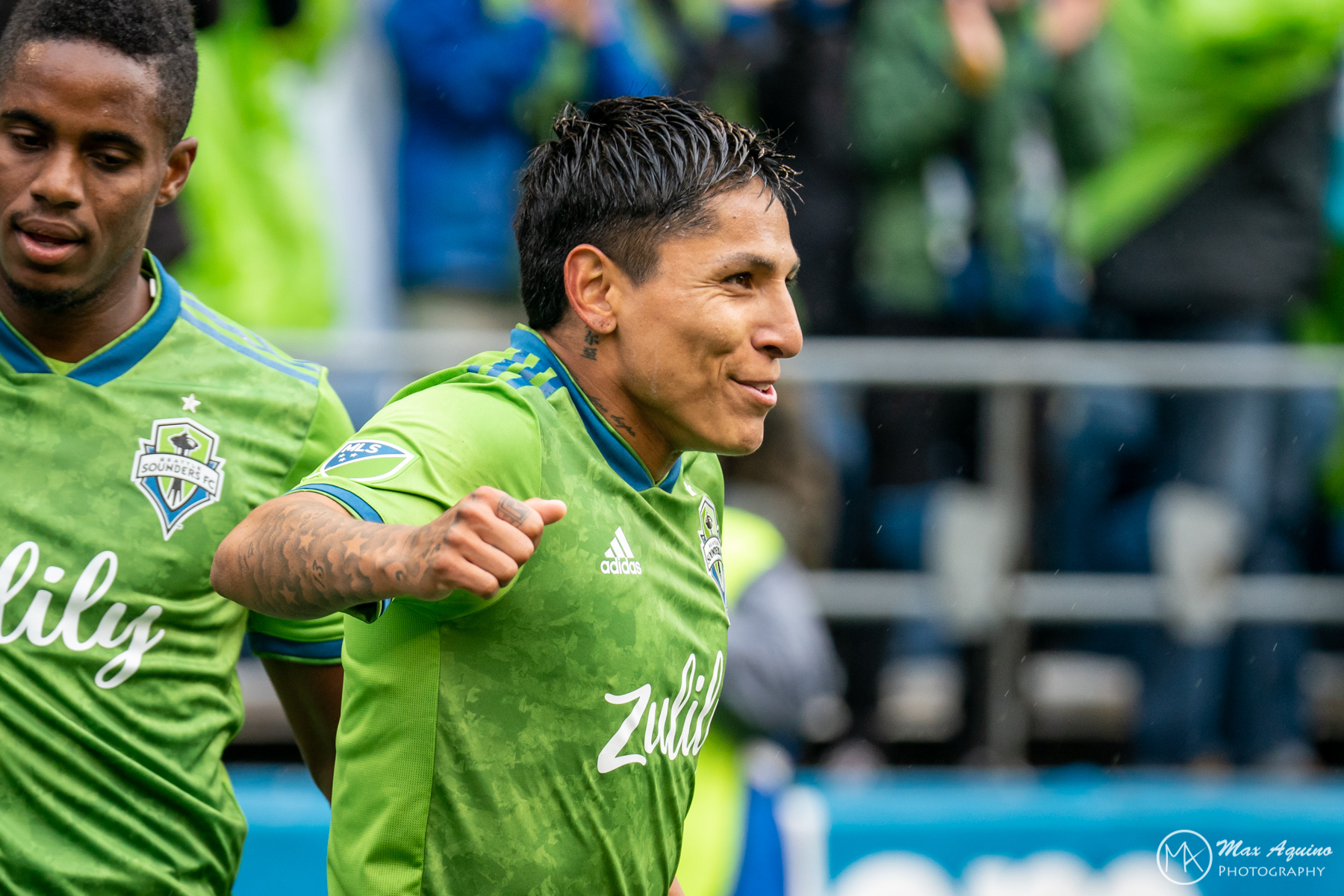 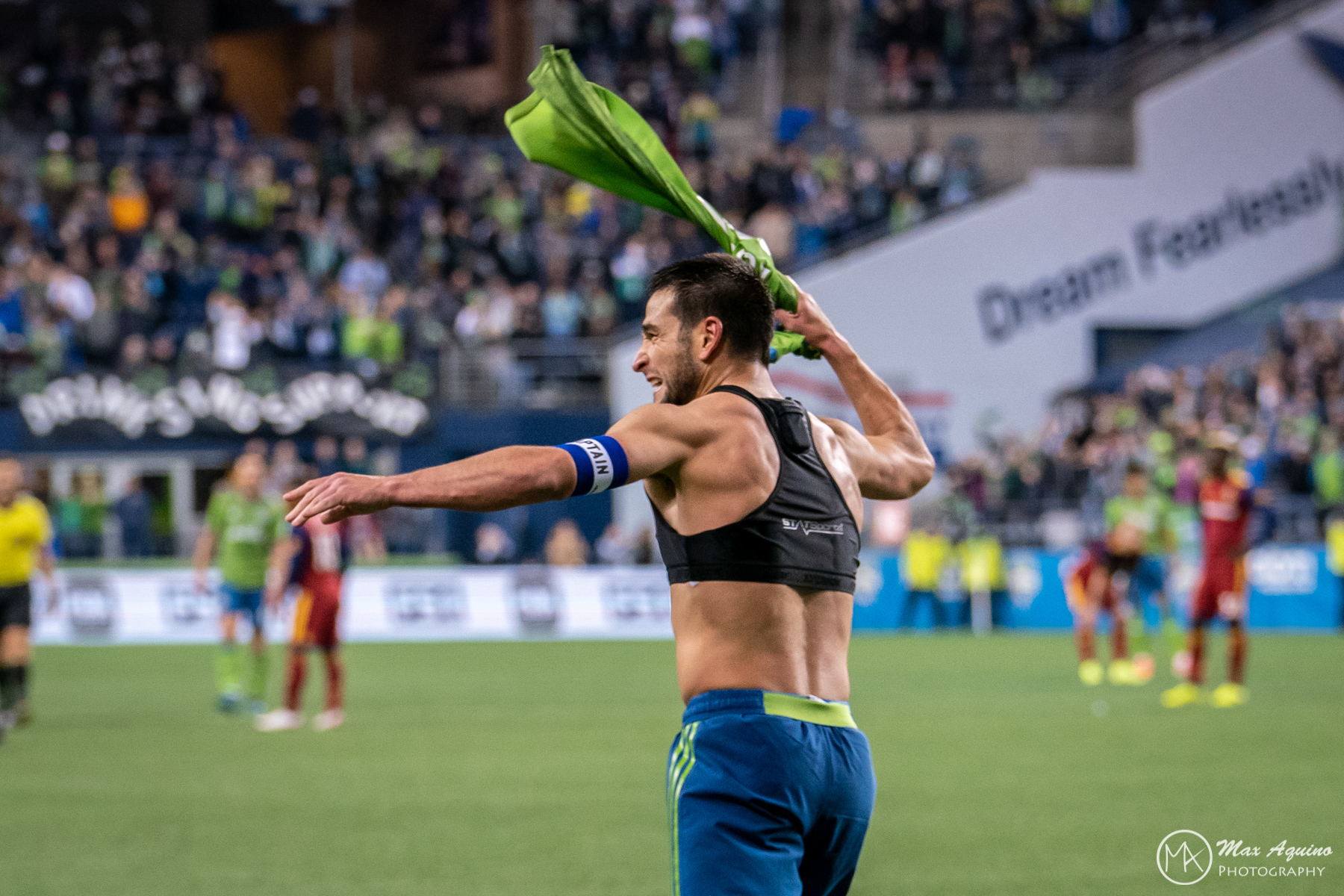 One more, you say? What kind of friend would I be if I didn’t accommodate a request from my loyal fans fan (hi Mom!)? Sometimes, you have a player who is so passionate that it doesn’t matter who scored the goal. While not the hero of the game, you can’t deny the sheer joy Cristian Roldan shows while on the pitch. This was taken immediately after Nicolas Lodeiro scored the clincher against Real Salt Lake and is a great example of why the earlier you can get a photo, the more emotion will be shown.

Action photo of the game

Not every photo is designed to tell the entire story or fit nicely into a recap. There are some times where the frozen moment in time trumps the narrative or game state.

The photo of Frei against FC Dallas was taken in the first half of stoppage time from the opposite end of the field. When the ball stays on the other side of the field, I usually either quickly swap cards and edit photos or pull out the 600mm lens and hope for a miracle shot. These are “low percentage” because usually either focus doesn’t lock on to the right person or another player steps in front of the action. In this case, I anticipated Dallas shooting, so I had my focus locked in on Frei and my finger on the shutter. When he started to move, I timed it and took the photo, managing to hit the split second that his hand parries the ball away.

The photo of Ruidiaz came off a quick transition. He didn’t really set up the shot, the ball was bouncing from behind into a potentially open spot. Right as he looked over his shoulder at the goal, I locked my focus (praying that I had targeted the correct spot) and prepped my finger to the shutter again. The second he uncoiled, I made a five-shot burst and came away with a dynamic shot which would have been iconic, had it gone in. 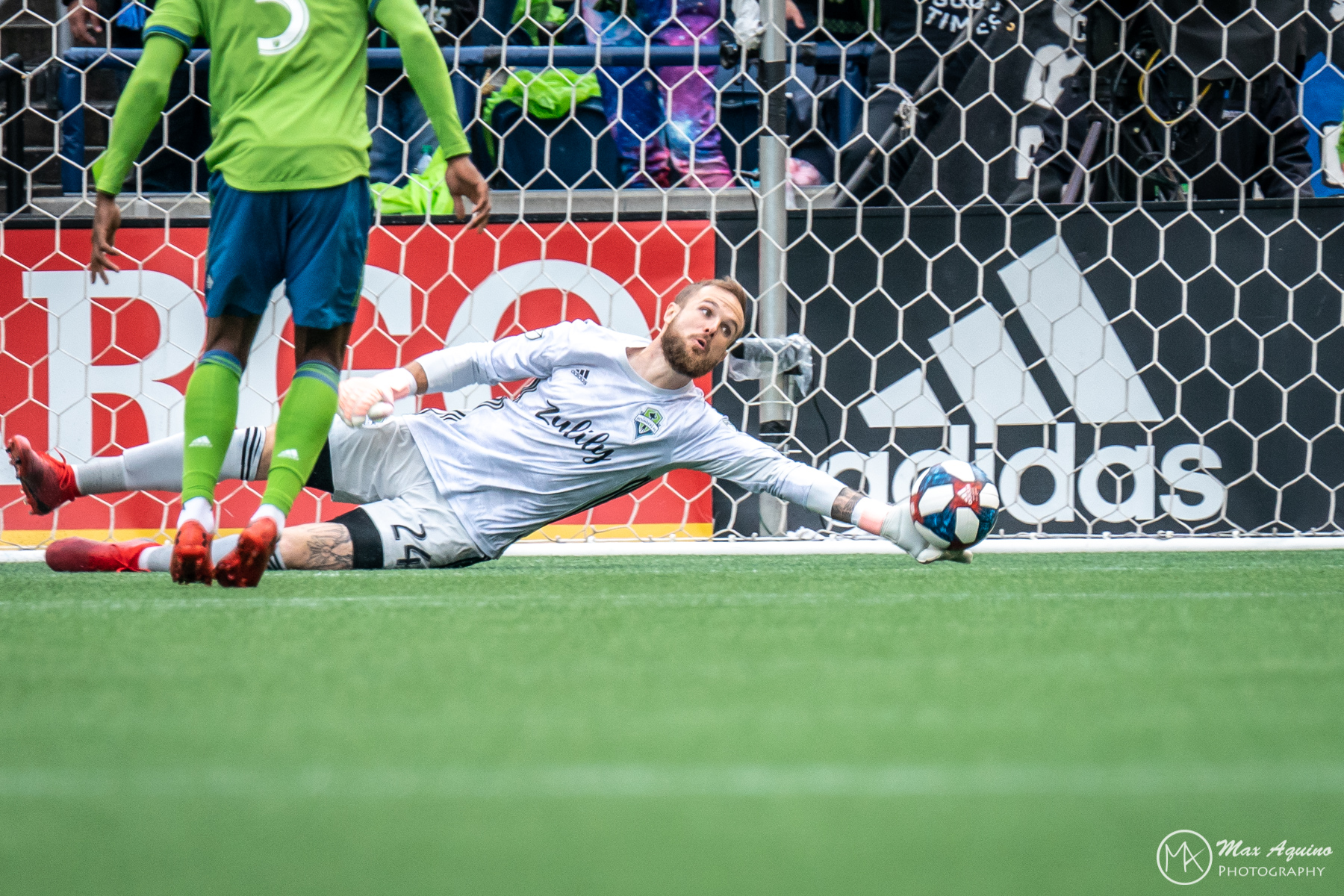 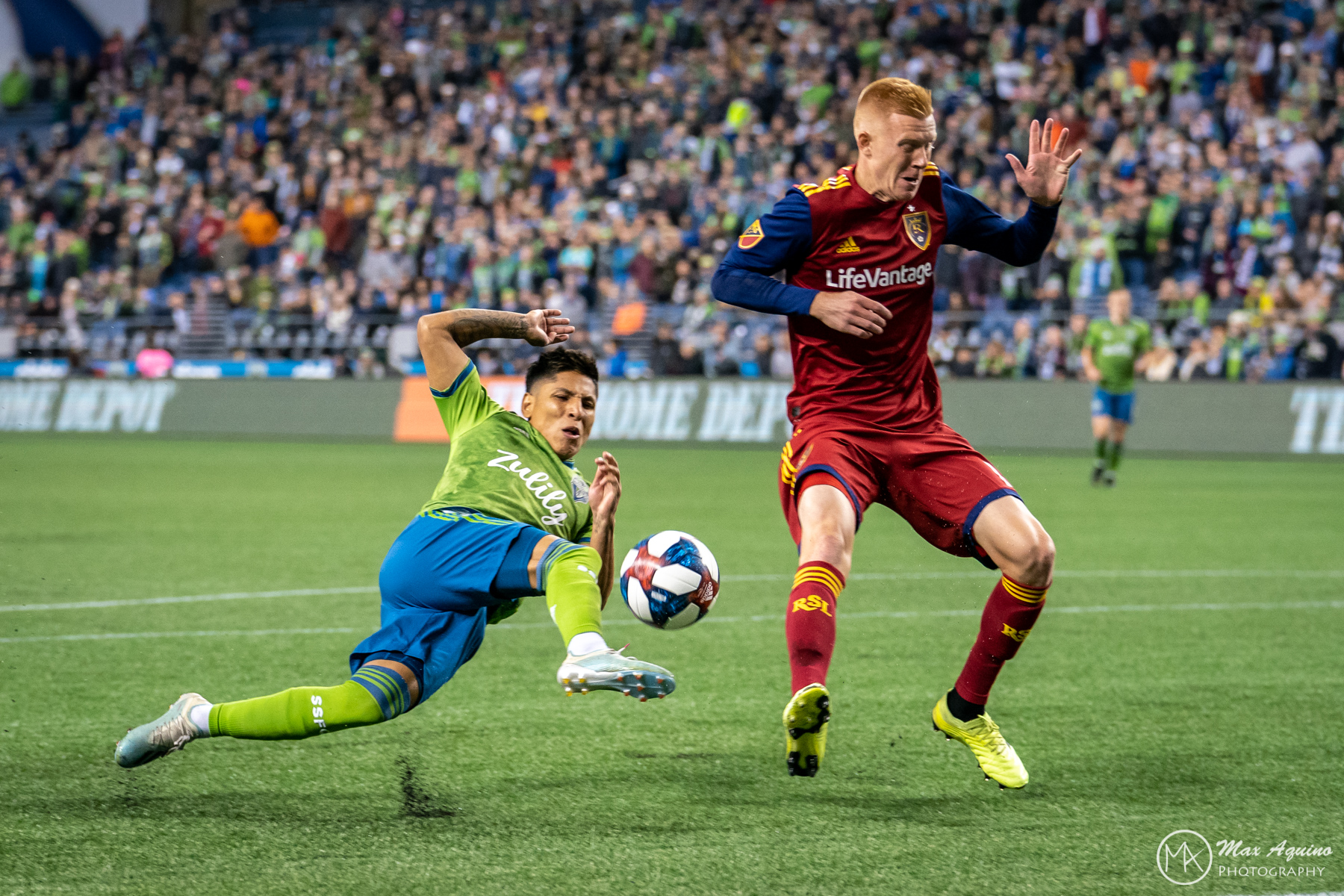 As with many things in life, the joy of victory brings a taste of sorrow. Earlier in the season, Nick Rimando announced that this would be his final season. While he has been the bain of our existence at times (see: Playoffs, 2011 — heck, any other time we play them), he’s been the consummate professional, playing hard, clean, and respectful.

For me, he has always been a personal hero. One of the things that led to me losing passion for soccer as a kid was one of my coaches telling me I was too short to play goalkeeper. Rimando has shown what can be done utilizing positioning, timing, pure reaction and athleticism, and willingness to go into traffic to punch a ball away. He’s been a top goalkeeper in MLS for two decades and a USMNT member. I’m glad he got to win the MLS Cup in Seattle in 2009 and, on a selfish note, I’m glad he got to end his career on this field as well.

Thank you, Nick, and best of luck with your next phase in life. 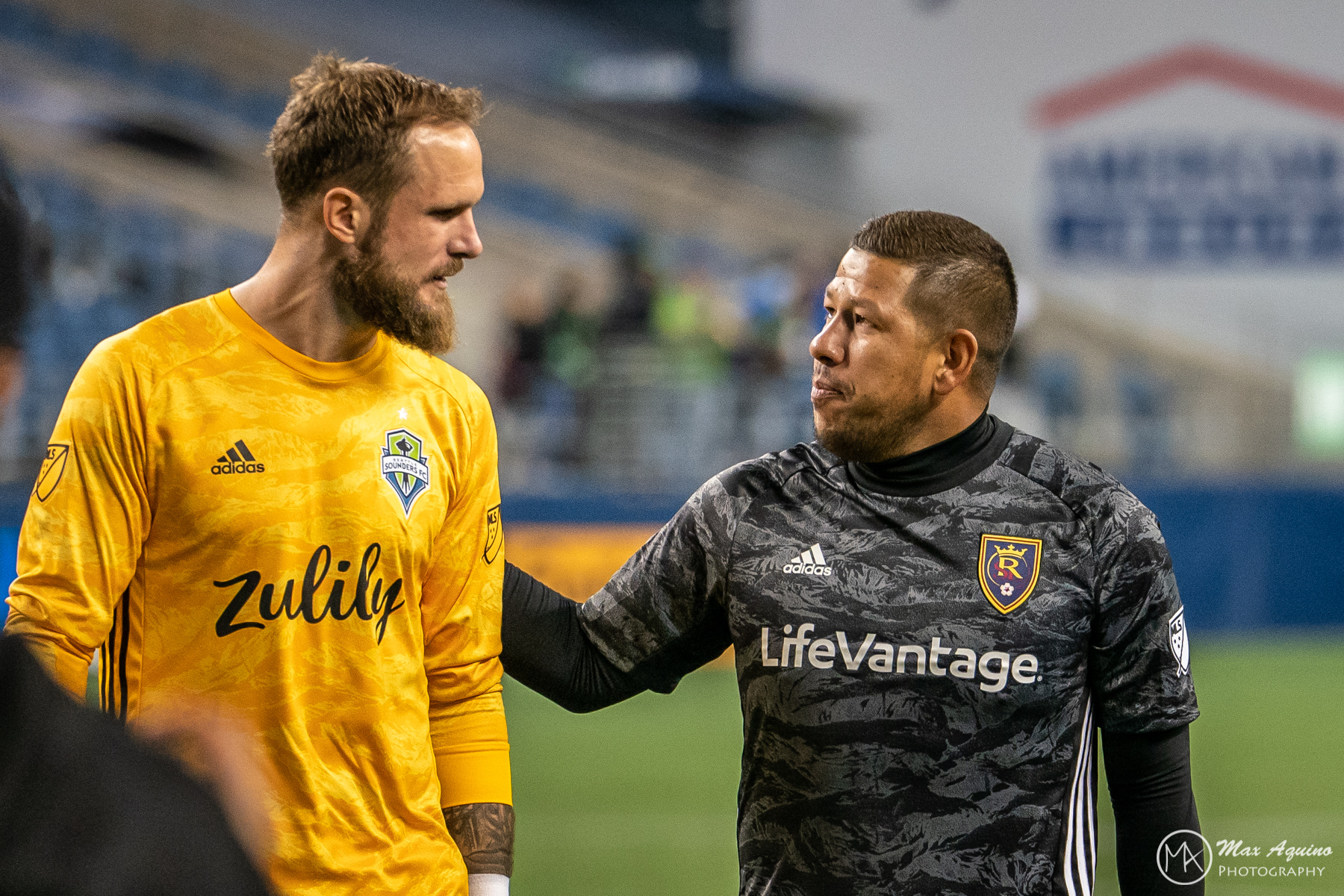 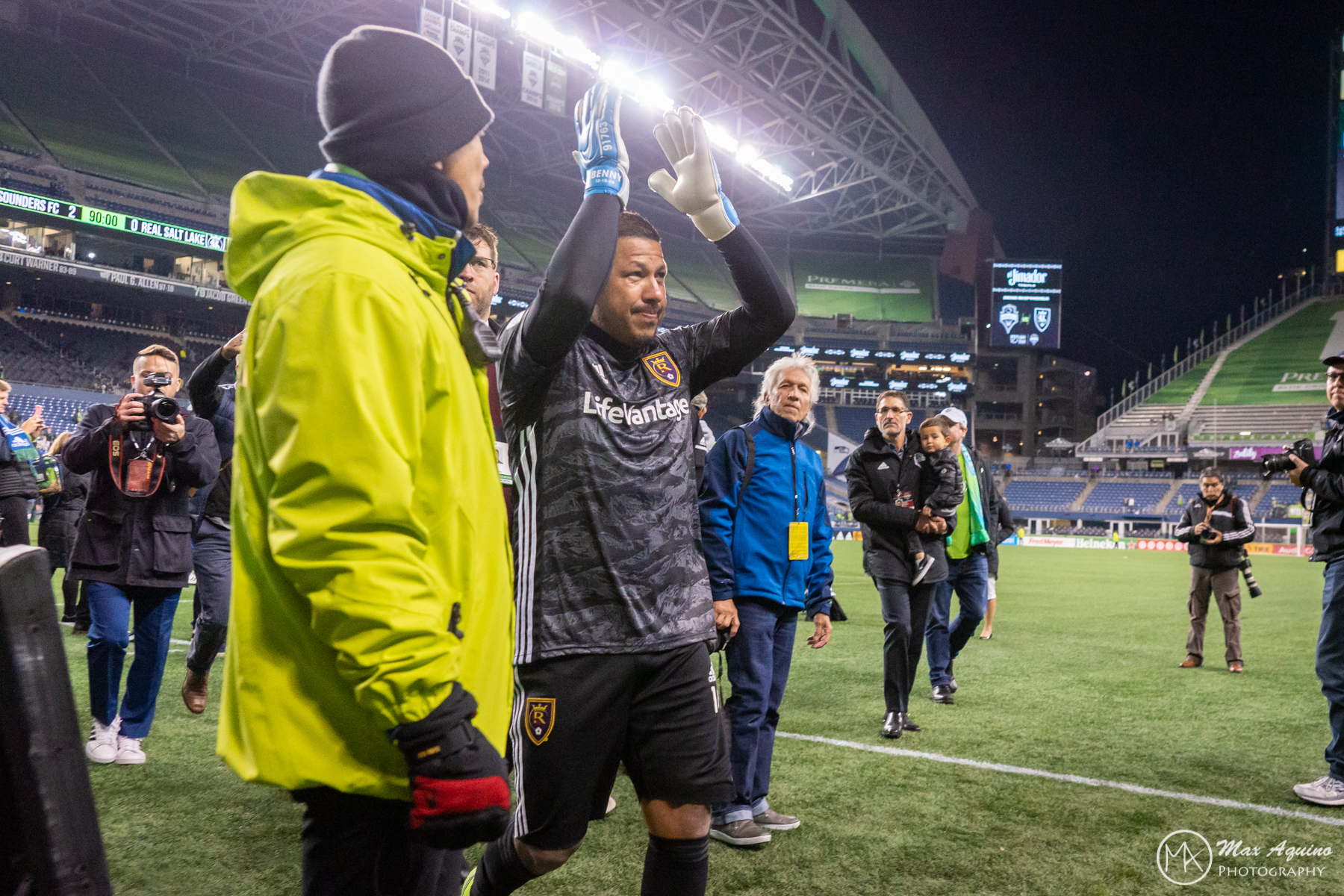