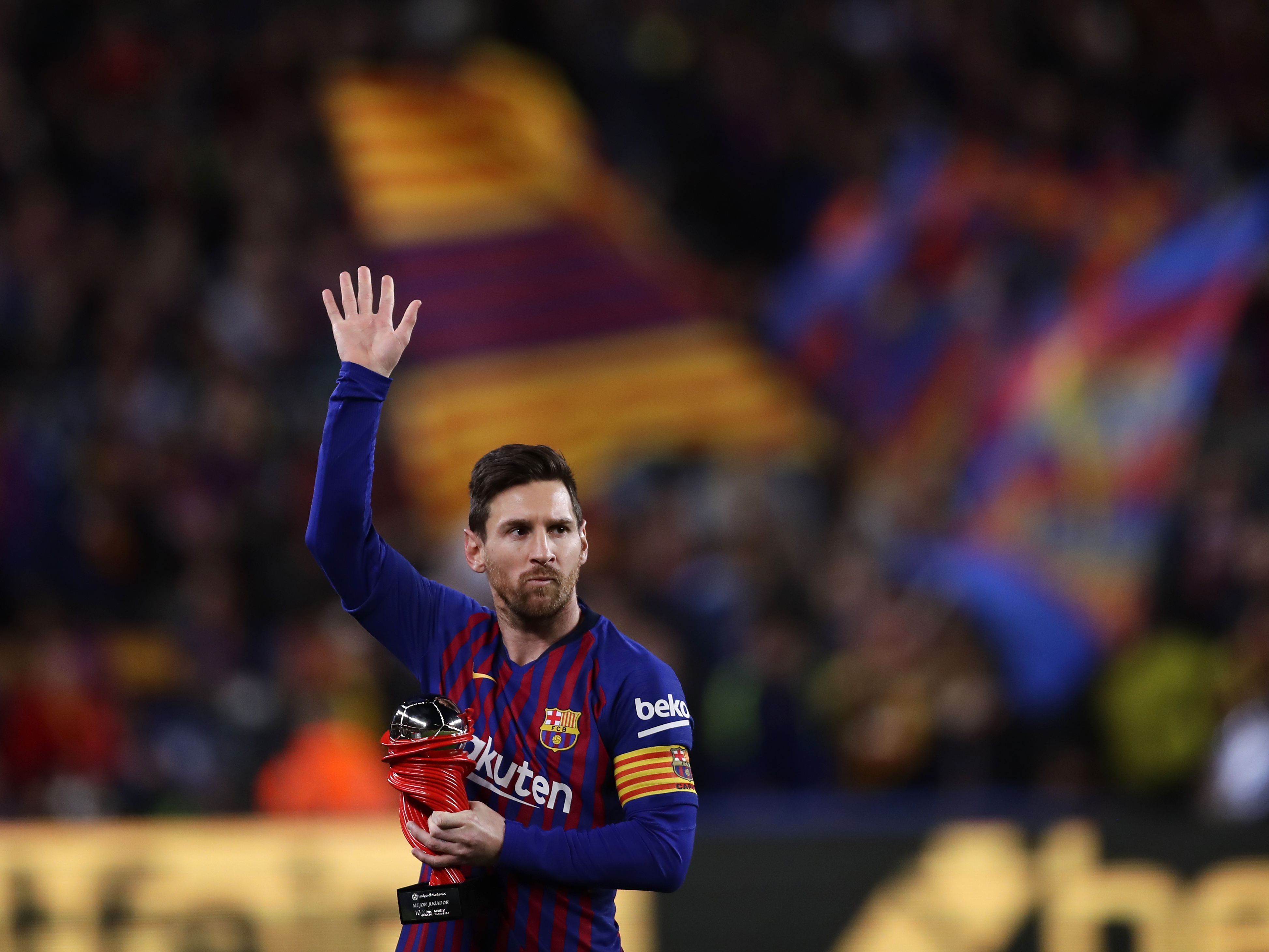 Contracts are legal documents that lay out exactly what each party to the contract is required to do to fulfill, with penalties laid out if one side or the other fails to meet those expectations. Chances are good we are all familiar with legal contracts to some extent, we sign them to lease or own property, get a job or even just sign up to comment on this website (sort of). Covenants are a bit murkier, religious covenants for example often have vague terms like "you should honor our god" and generally have few, if any, hard and fast rules. I'm drawing a distinction here because I think it's important to separate out two concepts for this post, what the legal rules are versus what the implied rules are, and a covenant is the best way I can think of describe the agreement that isn't laid out in black and white writing. When Messi left Barcelona this summer, it wasn't just the biggest story in soccer (though it was that) it was also one of the Messiest (I'm not sorry for this pun) divorces between a player and a club in recent history. Messi had tried to leave last year, but it had devolved into a legal fight over contract language, Messi's lawyers arguing that the letter of the contract said a particular date had been missed while the team argued that the date was the end of the season which had been moved due to COVID restrictions; you can read more about it here from a legal perspective: CWSL Commentary. Ultimately, Messi decided to drop the attempt to leave last year, probably realizing that the fight would drag on so long, even if he won it would not be resolved until next season anyway. Some people at the time wondered why Barcelona didn't let Messi leave if he was unhappy, but Barcelona was just backing up a long time covenant between the team, the talent and the fans "We are one of the best teams in the world, talent doesn't leave until we let them."

Has a Barcelona executive ever said out loud that "talent doesn't leave until we let them"? No, of course not, but it's evident in their history, it's a covenant that players implicitly understand when they join the club even if the expensive transfer fees in the contract didn't lay it out for them. Take for example, the Neymar transfer saga. Neymar was, at one point, viewed as the next Messi, the next Ronaldo, a once in a generation talent that Barcelona desperately wanted to hold on to. When Neymar left for PSG, a whole raft of legal actions between the striker, Barcelona, other teams in Ligue 1 and probably some other groups I missed was launched. Such was the complicated and expensive nature of the legal argument between Barcelona and Neymar that it wasn't even settled until this year(?!). There have been other, smaller contract disputes between Barcelona and its players as well previously, but Neymar and Messi stick out because of their high profile. The message Barcelona has been sending for years is clear, if you want to leave and we don't want to let you leave, too bad because we're going to hold on to you for a while; a covenant that every player (whether they realize it or not) sign on to when deciding they want to play in Camp Nou. This is a message to fans too, a message that you should expect the best players in the world to play for us until they aren't any good any more and retire or we allow them to leave. Now, to be clear, this isn't slavery or anything; Barcelona players are paid extraordinarily well, something that has come back to bite Barcelona in the ass and players could just...stop playing until their contract runs out. In the world of sports not playing for years is a good way to screw yourself out of a job, but there is no gun to head of the players, they could just go become bakers or something if they wanted to; but it is coercion, being forced to do something you don't want to do because the consequences are steep. In theory, putting in strict terms and big fees on transfers isn't a terrible strategy in the world of high priced international football; some agents are greedy and many of them get the biggest payouts when they arrange a transfer, so making that transfer price really high and making the terms of transfer onerous is a good way to tell greedy agents to pound sand. However, the players are human, they aren't soccer machines and like any human they may want to leave their jobs for reasons unrelated to their pay. Most people will, at some point, quit a job that pays them a lot because that job is crap, or turn down a job offer for reasons unrelated to the pay (I know I have). Barcelona trying to make themselves into THE end point of a career works great when the team is winning and everyone is happy, but when things go awry or someone just doesn't like playing for Barcelona, it becomes a crap show. Doing business the Barcelona way also means that fans expect the biggest talent to want to play for Barcelona and want to stay at Barcelona, and they will be pretty pissed when that doesn't happen; something that is happening now for once seemingly unstoppable club.

Contrast the way the Sounders do business with Barcelona and you can see the in the counter-example both the upsides and downsides of not being a jerk to players. The downsides are evident in the transfer of Obafemi Martins, the Sounders did not receive enough money under MLS arcane rules to get some sweet, sweet allocation cash and the dynamic duo between Martins and Dempsey was broken apart, leaving the Sounders a bit short on attacking talent and no time to replace Martins to start the season. You can also see downsides in Gonzalo Pineda and Djimi Traore's exits from the club; the Sounders gained nothing from either assistant coach leaving in terms of cash or talent. In all three cases, the Sounders could have easily put their legal foot down and said "no, you don't get to leave because your contract says so" much like Barcelona do, they could have stood on the black and white words to force people to stay and work; but there's a different covenant in play between the Sounders and the talent that work for them. A covenant between the Sounders, players and coaches that if you aren't happy, or want to pursue something new, that the team will do their best to accommodate you, to find a solution that works for everyone even if everyone isn't entirely happy. This also forms a covenant with the fans, that while this team wants to be the best in MLS they aren't going to do that by screwing people over, you aren't going to see big multi-year battles over transfer fees and contract terms. There are up sides to not holding people back when they want to go elsewhere though, players like Nicolas Benezet or Leo Chu are excited to come play for the Sounders, excited to show what they can do and excited to see where that adventure goes. Freddy Juarez left a head coaching job at RSL to join the Sounders, a bizarre move seen pretty much no where else in the world; part of that is because it sounds like Juarez's future was uncertain at RSL, but part of it likely is the fact that if Juarez gets a new head coaching offer, he can expect that the Sounders will let him chase his dream and not try to enforce the contract to the letter of the law.

Of course, it's worth noting that the Sounders are in a very different situation to Barcelona, the international market is very different for MLS compared to La Liga or Ligue 1; there aren't so many opportunistic agents lurking around looking for big transfer fees. Players come to MLS for minimal drama with their pay and working conditions; your pay for the year is set aside already, everyone in the league operates on the same basic terms and you generally won't see fan riots or violence. Still, even if the Sounders become that big, giant international monster club I hope they become some day, I hope they can still be a club where players want to come play, not just because we pay well or we're one of the best teams in the league/region/world, but because we actually care about how our players and coaches are doing as people, and are willing to help do what is best for them even if it doesn't maximize our bottom line. Because, at the end of the day the covenant is that this a team you will want to root for, rain or shine, top of the table or bottom of the league. Sounders 'til I die, right?

So, it's been two months and Heinze is gone in that time, he was 5th on my list but then again I didn't get to move him up after the whole "Josef Martins is training separately" thing. Anyway, moving on.

Big swings, in no small part due to the fact that there are two months worth of changes. But the top hasn't changed much, curious.