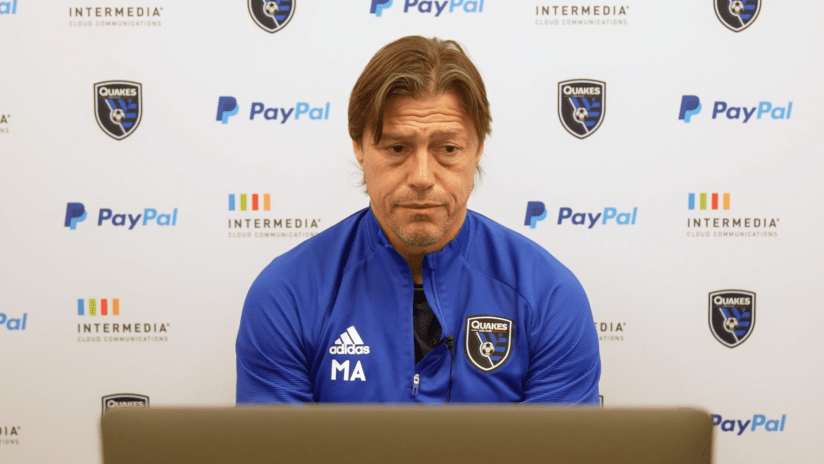 The Failure of Matias Almeyda

It all started so brightly, so beautifully for the partnership between Matias Almeyda and the San Jose Earthquakes, where did it go wrong? Well, it's the Earthquakes, duh! Okay, it's a bit more complicated than that, so let's dive in. Why hire Almeyda in the first place? Well because he has a history of resurrecting previous giant clubs and bringing them back to something akin to their former glory. Almeyda went to River Plate, which was then in the second division of Argentinian football, and in a mere year and a half won the championship to bring them back up to the top division. Almeyda then did it AGAIN, going to Banfield and restoring them to the top division of Argentinian football again in a year and a half. This got the attention of Mexican club Chivas Guadalajara, Chivas weren't relegated to the second division but much of the shine had come off of the club that was once the jewel of Liga MX. Almeyda came in with the intent to restore them to their former glory and got results almost immediately got results, just three months later Chivas won the Copa MX and then won the SuperCopa MX the same year. Two years later Almeyda won the Copa MX and the Clausura, making Chivas the first club to ever manage that feat twice. For his last trick with Chivas, Almeyda won the CCL in 2018, a stack of trophies that few managers could manage to get in roughly three years. In short, Almeyda did a lot of what he promised to do, once again making Chivas a club relevant in the top tiers of Liga MX, then due to "issues with an executive" Almeyda left the club. Now, with this sort of resume, surely a club like the Quakes are an ideal fit, a club once in the top tiers of MLS play now reduced to a joke mostly notable for having a giant bar in their stadium. Not so fast.

Matias Almeyda is a "system coach", meaning that he plays a particular system and will generally not modify that system too much within the club. Almeyda's system is also a bit of an odd duck in the world of modern football tactics, his teams play a man-marking style that fell out of favor in open play for most teams decades ago. In a man-marking system each player has a "man" to "mark" that they are supposed to stick by and defend, this system is still used by a lot of teams on set-pieces like corner kicks, but in open play generally speaking players use zonal marking, where you are responsible for a particular "zone" of play and defending within that zone. Man marking not being used in the modern game means a lot of teams aren't used to facing that sort of defense, it bamboozled the Sounders when they first faced it, at the time the Sounders relied a lot on overlapping runs along the wings and man marking works great for that because players will just stick with their man rather than having to figure out how to deal with multiple players in their "zone". The down side is that once teams have seen man marking enough, they know the way to break it, with fast breakout play or by focusing on the weaker players in the opposing team. Almeyda's system is a little bit more complicated than a basic man-marking system, he almost always has a spare person to either help clean up on defense or to find space to start the counter-attack, but in general this is a man-marking system with just a few tweaks. The problem with a systems coach is that they need players that fit their system, they need the freedom to bring in the talent they need and send the talent they don't need away, and you don't get that in MLS. In Argentina or Liga MX, Almeyda likely had a budget and some sort of approval process, but overall he could spend his budget in what he thought was the best way possible, either keeping his job or losing it on the basis of the team's performance. A man-marking system requires fast players who can keep up with their marks and San Jose did not have that when Almeyda started working there and they still really don't have that now.

Not all of the blame for the Almeyda situation falls upon Almeyda, a team doesn't fail on one person alone. Jesse Fiorenelli definitely deserves a good chunk of the blame here, the former GM did Almeyda no favors, preferring to bring in veteran talent from other MLS teams or Europe rather than look for the sort of young, swift talent that a man marking system really needs. Also, in general Jesse Fiorenelli is a garbage GM who makes bad choices and he should never be a GM in MLS again. Also, the ownership group, lead by Lew Wolff deserve a heaping helping of the blame here too, they have the money to afford better talent, but seem to not want to invest in the team, apparently hoping to sell it at some later point for a profit or just holding onto it to hold onto it. To their credit the Quakes are making investments in their academy after the Chris Leitch, who formerly ran the academy, was appointed GM but it's far too late to make a difference in San Jose's current situation.

So Matias Almeyda goes on the pile of "foreign coaches who failed in MLS", an idea that completely ignores the context in which those foreign coaches failed. As Atlanta United and Tata Martino showed, when the GM, owner and coach are all on the same page foreign coaches can absolutely be successful in MLS. In MLS when a coach fails, you have to question the general manager (or whatever title MLS teams want to use) that hired that coach, the ownership that hired the general manager and the decisions made within that structure. Almeyda could have been the coach to reignite the torch of the Quakes, to resurrect a team currently in the midden heap of MLS, but instead it seems like Almeyda is just baiting Leitch into firing him so he can move on. Not only have some of Almeyda's lineups been bizarre, like putting Cade Cowell at left back, he's openly saying San Jose don't want to win and waxing poetic about the end of his contract with San Jose. Almeyda failed, San Jose failed and now all that's left to do is throw around salt until everyone is blinded by rage. At least it's entertaining if you aren't a fan of San Jose.

A month in and I already think one man is on the brink of being fired. Spicy times ahead!

The first month of games mean some big movements in the Doom rankings!