With the Sounders slowly sliding ever closer to their first ever season watching the playoffs from home, I’d been wondering for a while whether their failure to win games this season wasn’t because of injuries or fatigue, but rather because of the one player who originally pushed the over the line the other way, bringing four final appearances and a bevy of trophies to the Emerald City – Nicolás Lodeiro. It might’ve just been my eyes, but ever since the Concacaf Champions League ended (and we officially became the best team on the continent), Lodeiro just hadn’t looked the same on the field. His passes didn’t seem to be hitting their targets, and he didn’t seem to be picking out the best passes either. He was still drawing plenty of "fouls," and his energy was still there – he was always buzzing around the field, but even that seemed a bit haphazard, as seen specifically in the away Timbers game, where he made several dangerous tackles. So, I decided to take a look at the data – to try and figure out whether what I was seeing was real, or just imagined.

I started simple, looking at Lodeiro’s overall passing completion rate. And over the course of the past five years (2018-2022), Lodeiro’s completion rate had actually gone up! Averaging 78.1%, 73.8%, 76.1%, 77.3%, and 80.4% respectively over the past five years, Lodeiro’s passes were just as accurate as ever, if not more so. I ran through a couple other basic statistics like average passing attempts per 90, but sure enough, Lodeiro was passing just as much as ever this season. 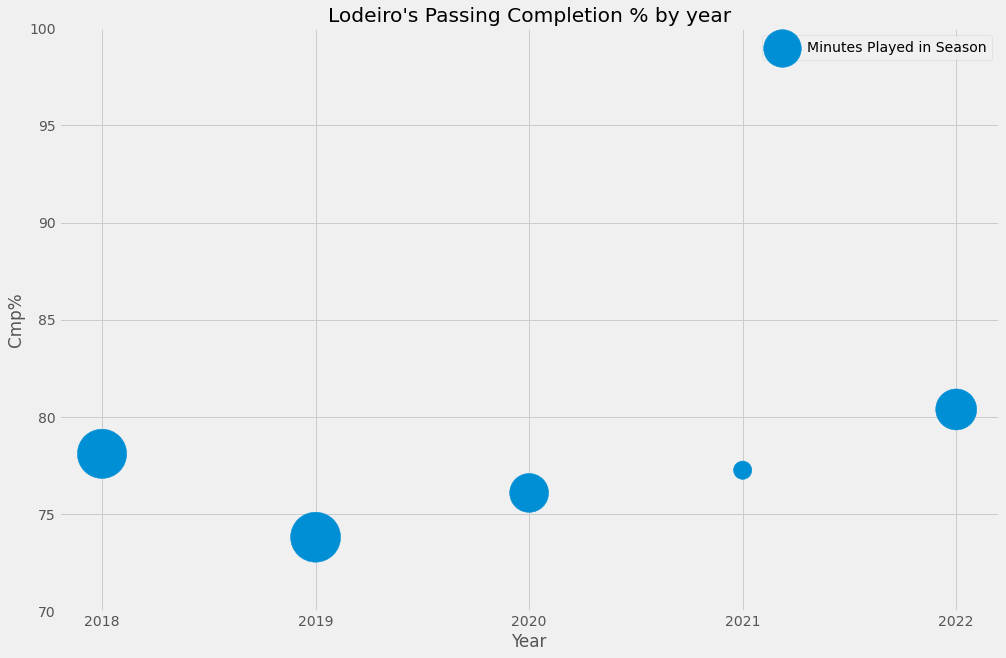 So, there was nothing wrong with Lodeiro’s surface-level passing statistics – but what if I went deeper? Next up, I decided to look at what types of passes he was making, how far they were traveling, that sort of thing. I measured trends over the past five seasons, looking at percent change, to see if there had been any significant deviations or developments in Lodeiro’s passing. And there were, of course – the team’s composition has changed over the years, and Lodeiro himself has gotten older. But most of the stats that trended significantly downwards over the years – Assists, Expected Assists, and Passes Leading to Shots (KP) – are all heavily dependent on other players, not just Lodeiro. 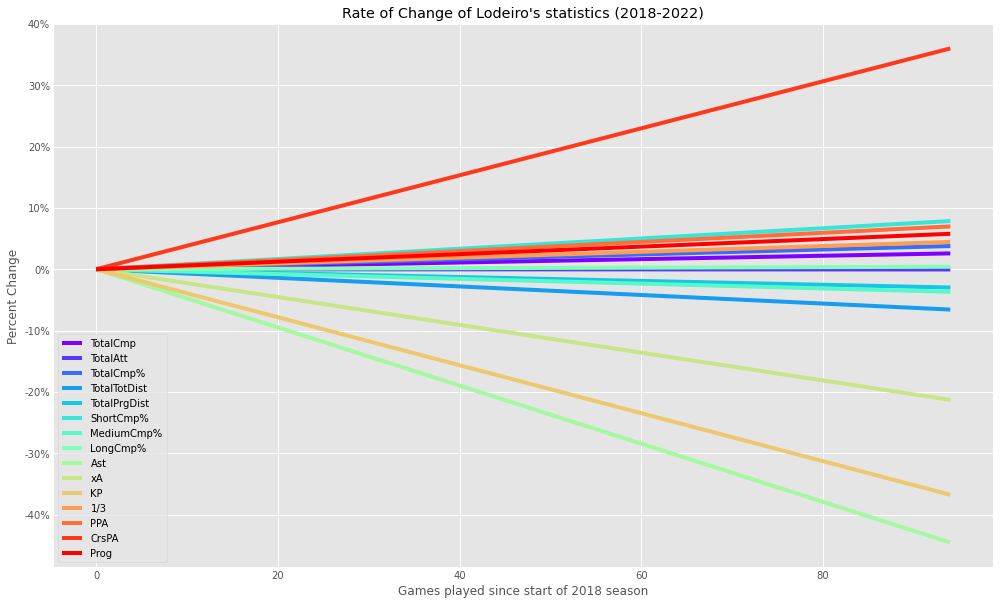 I tried one more angle, looking at even more technical statistics, such as the placement of passes relative to the rest of the field. And once again, there were significant developments over the years: Lodeiro has played fewer Through Balls and passes that switched the field, and more of his passes have been intercepted by the opposition. But at the same time, the number of crosses he makes per game has trended upwards, and the number of passes he makes under pressure has decreased. 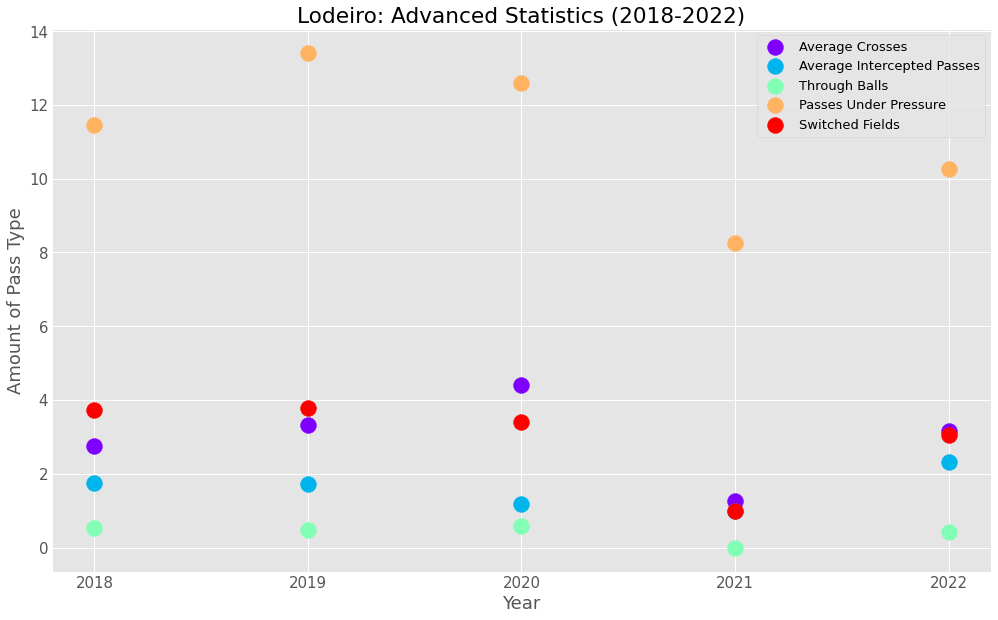 Taken individually, it looks like Lodeiro isn’t the problem. But he might still be a casualty of the best solution to our current problem, namely our defense. But before I get to that solution, I want to compare some stats really quickly. This time, instead of comparing Lodeiro to his past self, I want to compare his current season to a past season of a different attacking midfielder – namely, Albert Rusnák’s 2021 season.

Last year Rusnák was on Real Salt Lake, where he spent a lot of time in the center attacking midfield position. It’s been a while now since he played there, because Lodeiro’s always taken that spot when he’s been healthy, but if we look at that 2021 season, the last time Rusnák played the attacking mid position for a significant amount of time, we can see that he’s quite comparable to Lodeiro. Yes, Lodeiro tends to lead in overall quantity per 90 of stats such as passes attempted and dribbles attempted, and he plays more progressive passes, passes into the 18, and passes into the attacking third as well as contributing more on defense. But Rusnák is arguably more dangerous, just by sheer virtue of the shots that he creates, both directly and indirectly, getting the ball into the box and shot towards the goal more often than Lodeiro. He’s also more secure on the ball, completing a higher percentage of his passes and dribbles, meaning there’s less defense needed to begin with. Now, regardless of whether you believe that Rusnák is a better option at attacking mid, let’s table that for a minute, and get back to the current problem, that of the defensive midfield. 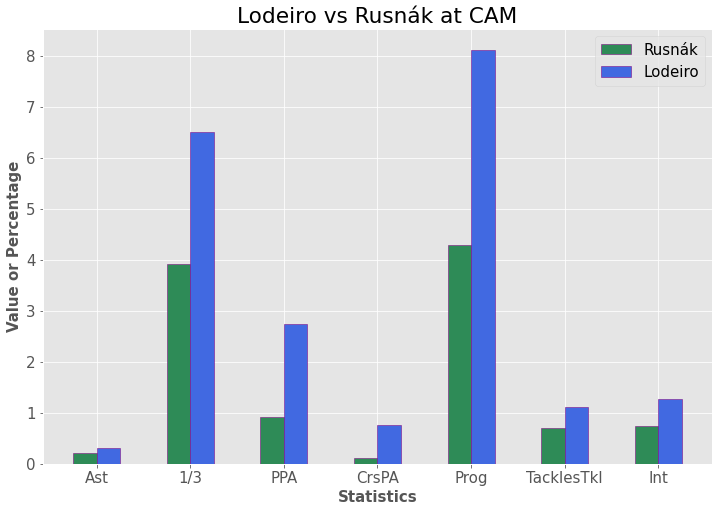 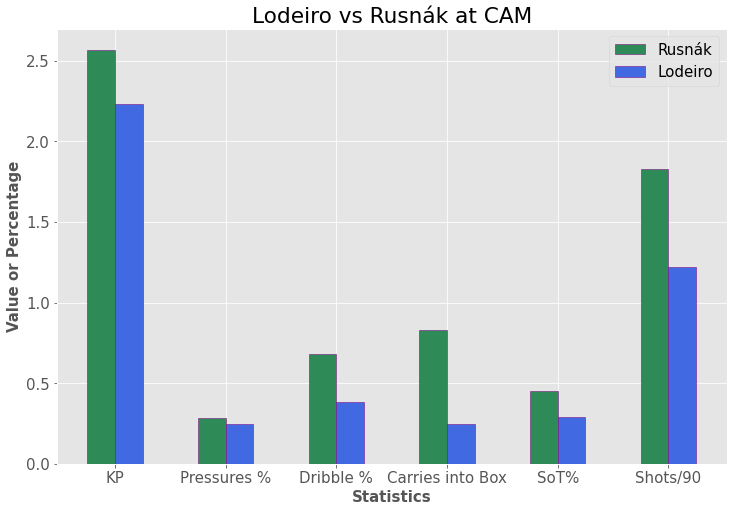 Since losing João Paulo to an ACL tear, we’ve been filling in his position with almost exclusively a mix of deputized youth: Obed Vargas, Danny Leyva, or Josh Atencio. The problem is that none of them alone, despite their potential, is capable of filling the MVP-finalist, Designated Player hole left by João Paulo’s injury. And especially now that Cristian Roldan is out, there’s no one in the squad who can do that. Instead, we need to take some inspiration from Moneyball. "What we might be able to do is re-create him. Re-create him in the aggregate." What if we play two youth – with our current injuries, that would be Danny Leyva and Josh Atencio – as the double pivot?

Now, of course, that presents the problem of what to do with Rusnák, and that’s where the comparison between Rusnák and Lodeiro above comes into play. While the statistics don’t show any decline in Lodeiro’s performance, one could at least make the case that Rusnák would still provide a better option at center attacking midfield. If you don’t agree with my above analysis and think Lodeiro should remain the attacking midfielder, fine, but the crux of this proposal is that only one of Lodeiro and Rusnák will be on the field at a time, and I’ve chosen to make that argument with Rusnák as the one. That means our midfield would be made up of Danny Leyva, Josh Atencio, and Albert Rusnák. 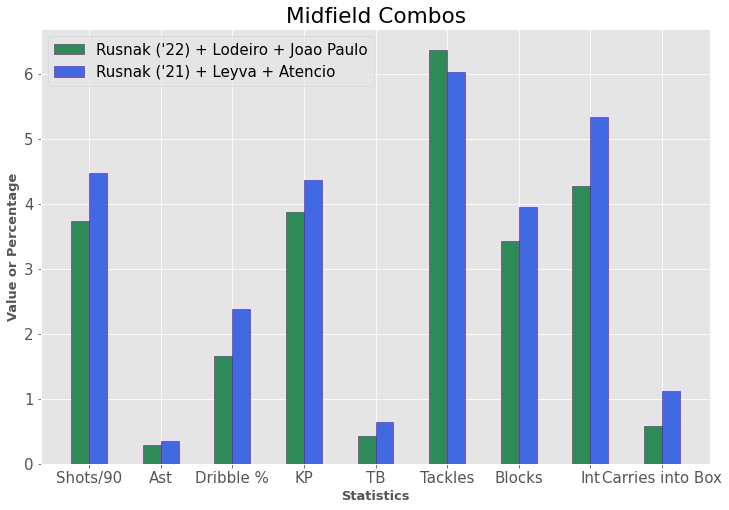 Statistically, at least, it seems like a potential solution. I aggregated Rusnák’s 2021 season, where he played attacking mid, with Leyva and Atencio’s current season, and compared it to the aggregate of Rusnák’s, Lodeiro’s, and João Paulo’s performances this season, making sure all stats were per 90 to account for everyone’s different playing time. Of course, there are various statistics where the veteran three are clearly better, such as total passing attempts, total carries, total touches, total passing distance, and goals, but that’s partially because, of the veteran three, two tend to be more attacking. Meanwhile, the "youth" three, or more defensive-minded three, still have their attacking benefits: they average more assists, more successful dribbles, more through balls, more shots per 90. And defensively, they match or outperform the veteran trio in nearly every statistic. Tackles, Blocks, Interceptions – you name it, and they’re up there. And it’s key to remember that João Paulo’s still out, so while I’m attempting to reproduce the output of that original trio, the current alternative is essentially swapping Atencio’s defensive output for Rusnák’s defensive output at defensive mid (assuming Lodeiro and Rusnák provide about the same defensive production while playing attacking mid).

We all know that for the Sounders to have much of a chance at making the playoffs, we need to win at least five of our last six games, if not all six. And yeah, we haven’t been scoring many goals this season, but to paraphrase Rusnák after the Orlando game, sometimes two goals on the road has to be enough. We need better defense, and while a lot of goals conceded, yes, have come from individual mistakes on the backline, we can absolutely still stand to improve in the midfield too. And if that takes moving Lodeiro to the bench? Let’s try it; what do we have to lose?

*All stats are taken from FBRef.com, and Nicolás Lodeiro’s individual analytics only come from games in which he’s played 70 or more minutes.