When the Club announced they were going with Providence as the main sponsor it sure has led to a lot of discussion and angst and arguing- considerably more meaningful arguing than the ridiculous whining about Zulily a few years back.

I'm back on the Alliance Council again and on our Slack channel we had the same discussions that we've seen here at SaH.

First, we need to stipulate to a few things that I think most of us can agree upon.

Plainly, there's a point where the sponsor is so evil that a club decides they just can't accept a deal with them, even if they back up a dump truck full of gold bricks to your office.

For example, say the Wagner Group wants to do a little sportswashing; I'm pretty sure the Sounders would tell them "no thanks" no matter how much money they offered.

But what if it were Exxon? Yeah, they're terrible on climate change, but what if they offered to pay to plant an entire new forest outside of Ellensburg and sponsor a massive new Pride celebration, as well as pay $50 million/year to be the jersey sponsor?

Which values are okay to be sold out, and for how much?

There's always a tradeoff spot, right? There's always a spot where the Club says "no, these values are too important to us, we can't take these guys on as a partner" or says "okay, we disagree on one thing, but agree on 95% of the important stuff- let's do this deal."

So with all those stipulations, and if we take for granted nobody's perfect, why all the hubbub around Providence? Are they just too bad for people to take?

I mean, for some people, sure, but I think it wouldn't have been this bad except for the factor I'll bring up in a minute.

I think a lot of people would have said "well, all medical billing kind of sucks, and that's a much bigger problem having to do with healthcare in America. And yeah, they don't do abortions, but people can go other places and the state picks up the tab if you have Providence insurance."

"And they do the trans surgeries, and while they have some issues with LGBTQ people, they can go elsewhere and mostly they're okay. This youth mental health thing is great, and no sponsor is perfect."

My belief is that it isn't because Providence is just too awful. (I mean, they are kind of awful on some stuff, but that ALONE probably wouldn't drive the level of anger we've seen.)

My belief is this: People feel strung along.

They feel like the Club led them to believe, for example, that some things were just too important to overlook for money. The biggie here is the abortion issue; the Club said, very bluntly: 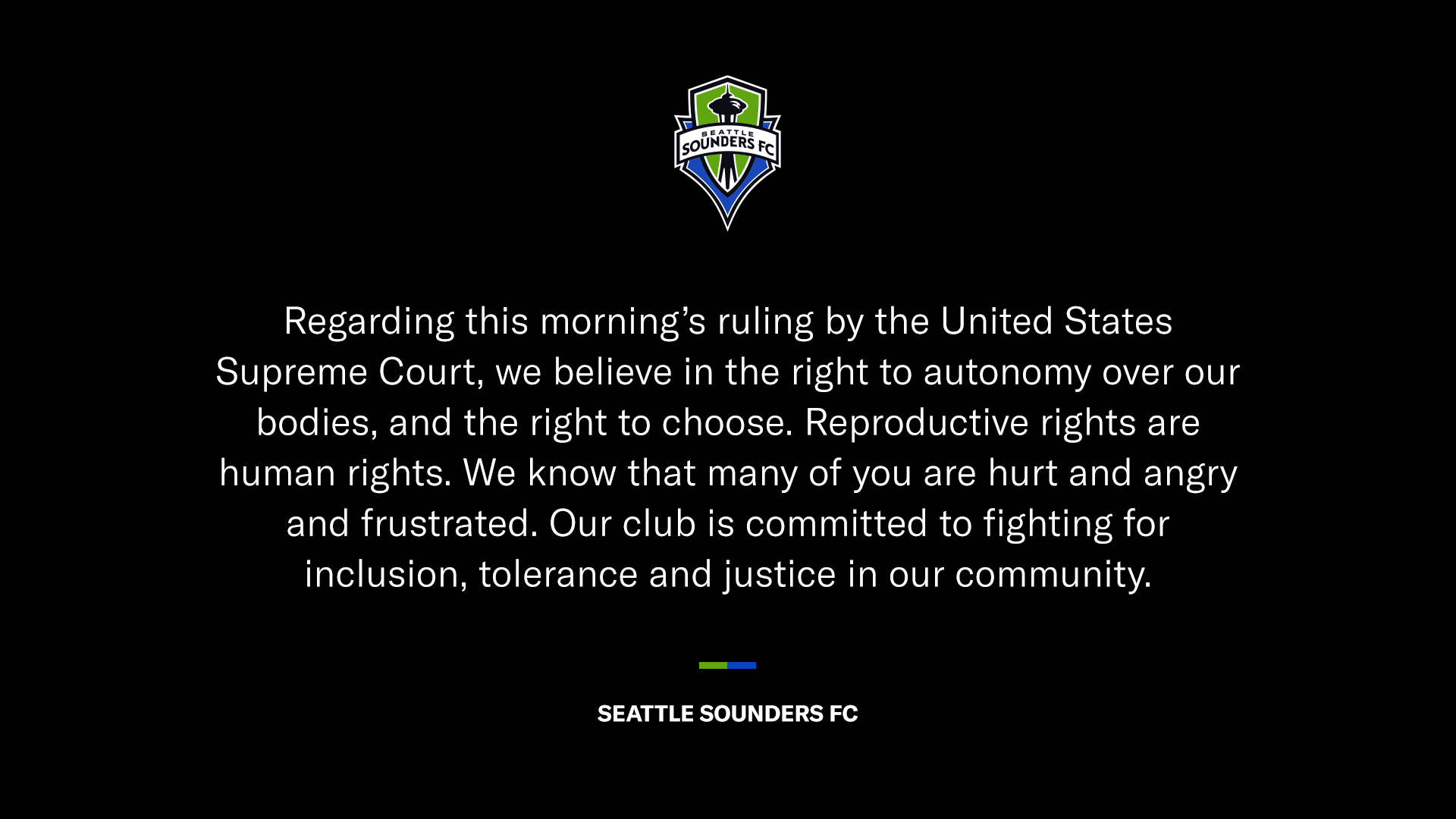 Not a lot of wiggle room there, to be sure.

So now the Club has basically put themselves into a bind, because they're basically taking money and overlooking Providence's stance on a human right.

And no matter how you square it, it looks like the Club has partnered with someone who doesn't agree on basic human rights. That's pretty damn serious.

Seriously, when I listen to a lot of the fans talking about this, that's what I hear at the core. Most don't vocalize it quite like that, but that's what I think is at the root.

When you read a lot of the more passionate statements, that's what comes through. ECS's statement for example, the comments here at SaH, etc.

Given this, the statements of the Club (at the Providence announcement) proclaiming how much Providence "shares the values" of the Club seem doubly insensitive.

So could the Club have avoided this, but still taken them on as a sponsor? Maybe. Probably.

But the way to deal with this is NOT to seemingly continue to sportswash a bad reputation, and talk around the core issue.

The discussions will continue. I note that nobody, even ECS, has outright demanded that the Club drop Providence.

I don't think this is irreparable, but I think some blunt talk and honest reflection is called for.

I don't think the Club actually MEANT to lie to people. I know a lot of the people at the Club, all the way to the top. They're great people, often feeling as strong or stronger on these issues as most of us. They're also not dumb; most of them are smarter than the average person. They're not monsters; they're kind, caring, thoughtful people who genuinely share the vast majority of our values. Seriously, they do.

But I just believe they haven't internally grasped the core of why people are mad and hurt. I think they got out a little too far ahead of their skis, and maybe they just take the "of course no sponsor is perfect" thing too much for granted and forget that sports is about emotion and passion, and that the fan base might know that no sponsor is perfect, but they want to believe their Club is.