Megan Rapinoe Upgraded Ahead of Depth Check in Boston

We get some good news for the long term, but in the short term the team is looking at a rough game against the Breakers tomorrow.

Share All sharing options for: Megan Rapinoe Upgraded Ahead of Depth Check in Boston

The Seattle Reign injury report has come out ahead of tomorrow's match at last-place Boston and there's a bit of good news for the team. Megan Rapinoe, who's been out since the beginning of the season with a foot injury, has been upgraded from 'Out' to 'Questionable'. That would still make it unlikely she'd play, but it's a bit of light at the end of the tunnel of an injury that's lasted far longer than anyone expected originally.

Unfortunately, it might be one game too late for a team that's going to have its depth stretched to the limit with almost its entire contingent of national team players away for friendlies and qualifiers. Hope Solo, Stephanie Cox, and Sydney Leroux are all away with the US team for a pair of friendlies versus France (the first of which they won 1-0 on a Leroux goal). Jess Fishlock is away with Wales for UEFA World Cup qualifiers, as is Kim Little for Scotland. And Carmelina Moscato was also upgraded in the injury report to Probable, but is with Canada for friendlies.

The one bit of good news is that Japan didn't schedule any national team activity during this 'break', so Naho Kawasumi is still with the team. But even with her the team is going to be relying heavily on bench players and likely some reserves to fill out a lineup against a Boston team much less reliant on internationals.

A stab at a starting lineup would be something like: 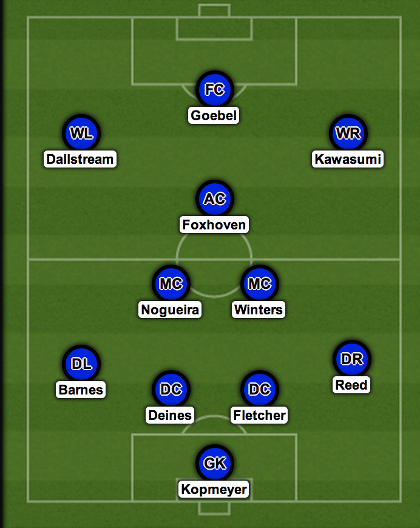 The biggest absence by far is the central attacking playmaker position, which is so critical in Laura Harvey's system and which Little has occupied so effectively this season. In her absence, you'd generally pick Fishlock to take over in the middle. With both gone, you run into trouble. I've penciled in Danielle Foxhoven as an experienced attacker with good passing touch. Another option would be Kawasumi, but her crossing is so good from the wing and her ability to hold the ball under pressure in midfield hasn't been well tested.

The defense is mostly unaffected, with just Cox needing to be replaced at left back. And of course it'll be Kopmeyer's first start with the team this season. Even against the team at the bottom of the standings, this might be a game to use a solid defense and the two holding mids to grind out a low-scoring draw and get out unscathed. In any case, the team's undefeated record is going to be threatened.