The US Women's team stumbled hard against France. And given the lack of interest in adding any new players to the team, it's a warning that we may be in for a rough World Cup.

No matter what happens at this summer's World Cup in Canada, the US Women's National Team will reach the end of an era. All-time leading international goalscorer Abby Wambach will be 35 when the US kicks off its first game. Team captain Christie Rampone will celebrate her 40th birthday during the tournament. Team icons Hope Solo, Ali Krieger, Heather O'Reilly, and Carli Lloyd are all in their 30s. The question that haunts the team right now is whether that generation will end their tenure winning the World Cup trophy that's eluded them (or all but Rampone, anyway) through their entire international career or with a failure that will mark the end — maybe the permanent end — of America's dominance of international women's soccer.

The United States' abject loss to France on Sunday served as a warning that the latter is becoming increasingly likely. America's reign over the women's game, built on the back of Title IX and the vast network of high level college women's soccer that grew in its wake, is starting to founder as other countries — particularly in Europe — have embraced the women's side of the sport with national academies and professional leagues. France certainly made a claim on the title of best team in the world when they overran the US.

Immediately after the game, the diagnoses from fans on social media were as relentless as they were familiar: the team has no new blood, they're playing veterans out of position, they have no tactical ideas other than booting the ball forward and chasing it. 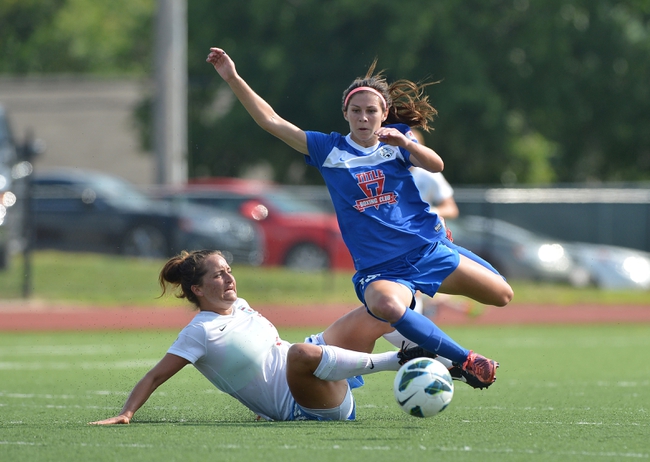 The first of those criticisms — that the team is a private party overly reliant on a handful of players — is the easiest one to investigate. I've gone back over the last 14 months of national team games — that's calendar year 2014 plus the February friendly — leading up to this World Cup and compared it to the equivalent stretch for the US Men's team's 2014 World Cup preparation — calendar year 2013 plus their first February friendly. Conveniently, it's almost the same number of games. Counting friendlies, Algarve, World Cup qualifying, and the Brazil tournament, the women's team played 25 matches in that period. In the equivalent period for the men, through friendlies, the Gold Cup, and World Cup qualifying, the men played 24.

The headline takeaway, and the one that most directly answers the question of how much the women's team is integrating new players, is that in that span the men's team played 51 players and the women's team 31. The men's team had no players get more than 20 caps and only three — Eddie Johnson, Omar Gonzalez, and DeMarcus Beasley — got more than 15. Meanwhile the women had 10 players with at least 20 caps, led by Carli Lloyd and Christen Press, who each appeared in 24 of the 25 games the team played over those 14 months.

Here's a chart, with groups of players colored by how many caps they earned in that span. The width of each bar corresponds to the number of players with that number of caps:

The biggest differences are in the 20+ group, which doesn't exist for the men, and in the 5-10 group. Those are generally the rotational players who get time in friendlies to see where they might fit in competitive matches. The men had 17 such players, including the likes of Joe Corona, Sacha Kljestan, and Brad Davis. The women had only three, and one of those was Alex Morgan, who played in so few due to injury. The actual rotational players were just Stephanie Cox and Kristie Mewis.

And while the women do have a sizable group of players with a handful of caps, they seem to have little chance of appearing in more than a game or two. A few are keepers filling in for Solo on spot duty. A few are older players, like Lori Chalupny, getting back into the national team picture. Very few are legitimately new players getting a run out. For the men, that last group includes DeAndre Yedlin, who would go on to feature in the World Cup and is now a national team regular.

It's all the more concerning that the US gives so little time to feeling out new players when you take into account the lightness of their schedule. Of their 25 matches, 5 were World Cup qualifiers and 20 were friendlies — 4 at the Algarve Cup, 4 at the Brazil tournament, and 12 one-offs. Of the one-off friendlies only two were played on the road — one in Canada and this week's loss to France. Given that the World Cup qualifiers were played on US soil, that means the US played 15 matches at home, 8 on neutral ground at tournaments, and twice at a hostile venue. Home games against the like of Russia are walkovers. . perfect opportunities to try out new players. And yet in those games it was the same story, the same small group of veterans starting every match.

A team playing the same core players over and over again in easy matches doesn't look like one that's preparing for a World Cup. It looks like an exhibition team. And that's been the running concern about the women's team. That it was so good for so long that the federation forgot competitiveness and turned it into a cash cow, touring friendly venues in the States and obligated to put out the recognizable superstars that youth teams and soccer moms pay big bucks to see in person.

An easy counterargument is that the women's pool just isn't as large as the men's pool. But the NWSL — which exists in part to address that problem — has been almost completely bypassed by the team, which relies on the same college-to-youth-team-to-senior-team pipeline that it's used for decades. After two years there are no examples of players excelling in NWSL and moving into the national team picture. The closest was Erika Tymrak, who was called up by Tom Sermanni after a stellar 2013 pro season, but she only had 1 cap in the last year. Allie Long was brought into the rotation from a solid showing in NWSL, but had only 4 caps last season and seems to be far from a starting place, despite the team's clear need for a dedicated holding midfielder to replace Shannon Boxx.

And with my admittedly pro-Reign glasses on, I can't fathom how Keelin Winters hasn't been given a run out on a team desperate for defensive mids. Or how Elli Reed, who runs the right side of the best defense in the league, has never seen a minute on a team that's desperate for fullback depth. And I'm sure fans of every team in the league could give you more examples of excellent players who get no chance to prove themselves. The pool is there. The national team just isn't interested in using it.

And in July we're going to find out whether Jill Ellis was right to ignore the rest of the pool or whether it was a fatal error.