Your 2015 Reign Offensive Player of the Year

After a 'little' holiday hiatus, we return to bring you the results of our site Player of the Year voting. This time, it's the players who put the biscuit in the basket.

Share All sharing options for: Your 2015 Reign Offensive Player of the Year 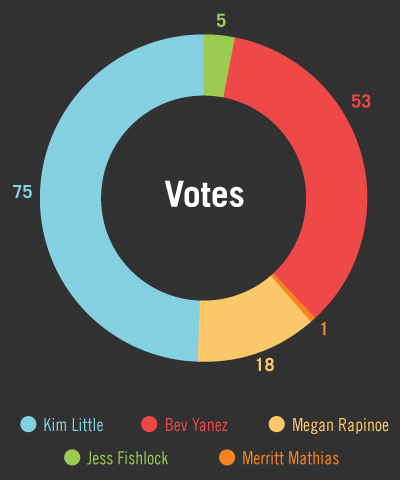 In the ancient time of yore that was the year 2015, we asked our community to vote for the Reign players of the year. Previously, we wrote that Lauren Barnes was our Defensive Player of the Year. Now it's time to reveal the most-voted for Offensive Player, and I suspect the result will not surprise you.

Yeah, it's Kim Little. The Reign's all-everything dynamic attacking midfielder is the team's best finisher, best dribbler, best distributor, best crosser, etc, etc. She won the League MVP in 2014 and was only just beat out by a tremendous season from Crystal Dunn in 2015. But Little didn't get all of the votes. Here's a detailed breakdown of the standings:

What more is there to say? Every time she touches the ball, every human and seabird watching leans forward in their seat or on their bench waiting to see what'll happen next. I mean, look at this. LOOK AT THIS.

We maintain that the only reason Little isn't routinely in the running for World Player of the Year is that Scotland is mostly a non-factor in the international game and FIFA voters are excessively focused on accomplishments in Europe. By rights she should be in the conversation with the likes of Carli Lloyd and Célia Šašić.

The biggest question coming into the 2015 season was whom Seattle could acquire to replace the talents (though admittedly limited production) of Sydney Leroux at forward. The answer was nobody. They didn't need to, because Yanez stepped up in a big way. Her presence on set pieces and perfectly timed runs to the post earned her a 9-goal season — 5th in the league. And she wasn't just a poacher. She also had excellent distribution, including this perfect leading cross to Jess Fishlock for a goal against Western New York:

As a bonus, I guarantee she is one of the nicest humans you could ever meet.

Seattle's American superstar had a really good two-thousand-and-fifteen, which included getting engaged and winning a World Cup. But most of that really goodness happened away from the Reign, dropping her down these rankings. She opened up the season in spectacular fashion with a hat trick against Western New York, including this sweet little give-and-go for her third:

National team duty limited her to just 10 matches for the club team, though she still somehow managed to end up tied for second in the league with 5 assists. And next season may end up being just as limited, as she suffered an ACL tear at training during the US Women's interminable 'victory tour'. But no matter how long it takes her to get back, there's no doubt that when she steps on the field, she'll return to being one of the most dangerous attackers in the league.