Where the Seattle Reign Roster Goes From Here

The team has a core. Now a roster needs to be built around that core.

Share All sharing options for: Where the Seattle Reign Roster Goes From Here

Friday's long-awaited announcement of national team player allocations to NWSL teams certainly produced some drama. Any Seattle fan who thought that regional connections would be a factor was given a rude surprise when last year's Sounders Women were dispersed to the four winds, with superstar Alex Morgan sent to Portland, Vancouverite Sydney Leroux off to Boston, and Veronica Perez — who seemed like a lock for the Reign as a UW alum and the only allocated player to play all season for the Sounders Women — to Western New York. Of course, local legend Hope Solo came home, demonstrating that US Soccer isn't totally bonkers.

Portland can claim some consternating losses as well, with local resident Abby Wambach going to Western New York and Pilots alums Megan Rapinoe and Sophie Schmidt going to Seattle and New Jersey respectively. But they held onto another Pilot in Christine Sinclair who will team up with Morgan in an absurdly talented forward tandem, so nobody is crying in their beers down south.

Now Seattle — along with the rest of the league — has to surround their core of national teamers with complementary players and form a functioning roster. That process will start with the college draft next week and what will need to be a flurry of free agent signings before preseason camp begins.

It'll be natural to fantasize about big-time international players like Marta and Louisa Necib lighting up rosters across the league as we saw in WPS, but keep in mind that NWSL is being built from the ashes of that failed league with financial discipline as a priority. With an expected salary cap of $200,000 for players not being subsidized by the national federations, that leaves only around 12-15K per player, depending on the final roster size. That's barely over minimum wage for 6 months of work, much less enough to lure players making ten times as much in Europe. Instead the rosters will be filled out with drafted college graduates, ex-WPS journey(wo)men, and W-League and WPSL players ready for the next level.

Here's some quick info on the roster as it stands:

Thus far the strength of the Reign is in net — where Solo is the best in the world and a lock to be one of the team leaders — and in a midfield led by Rapinoe. If we take some hints from head coach Laura Harvey's previous setup at Arsenal, we can expect the offense to be focused through an attacking central midfielder. Arsenal's top scorer was Kim Little, who averaged more than a goal a game from an advanced midfield position. That seems a natural fit for Rapinoe, and if we build the roster around that assumption, it'd look something like this: 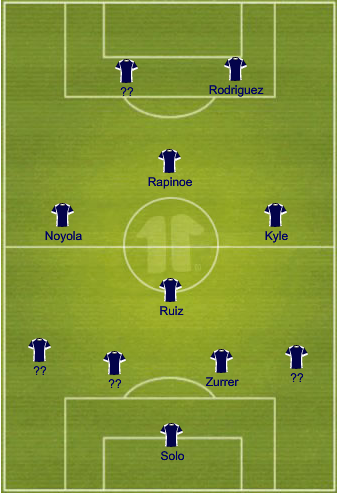 A-Rod needs a partner up top, but otherwise the team needs near a full starting back line. An alternative to this lineup would involve playing Noyola up top, which would give us our starting forward tandem, but I suspect the team will be better off with some attacking height on the front line and Noyola may be better deployed as a winger. And with Rapinoe out for a third or more of the season playing in France, it seems more likely she'd take over that central attacking role for the start of the season. Ruiz could also potentially play fullback, which would help fill out the defensive core.

Needing defenders is an advantageous situation economically, since forwards and other attackers tend to demand higher salaries (and attract more competing offers from overseas), so it may be possible to put together some veteran defenders at NWSL pay scales.

There are some obvious candidates to help fill out the roster. Kate Deines played last year for the Sounders Women at center back after a long and legendary Huskies career as a midfielder and forward. She's played for the US international youth team and most recently was playing in Iceland with Veronica Perez. She knows Solo well and could help stabilize the defense.

Tina Ellertson is a veteran defender who last played with Solo (and many other national team players) in the eventful 2011 magicJack season. She's currently residing in Vancouver, so it wouldn't be a terrible commute.

Some other Sounders Women who could make the jump (though we here at Sounder at Heart do not necessarily endorse poaching the Sounders Women) are midfielders Sophie Reiser, Lyndsey Patterson, and Julia Roberts (though she's from the east coast).

And there's a large pool of players left jobless by the fall of WPS. Included in that is Natasha Kai, a national team forward up until this year who's apparently been playing rugby most recently and who played with Rodriguez at Philadelphia in the WPS days. She could certainly complete our forward tandem.

In any case, we'll know a lot more about the team after the draft next week. At least about the roster. Someday we may even learn where they'll play...