Christine Nairn scores the team's first ever goal and the midfield holds the fort well enough to earn a road draw in their first match.

The NWSL suffered some pretty severe birthing pangs on its opening weekend, with spotty or totally nonfunctional broadcasts for all but one of the matches. The Seattle Reign and Chicago Red Stars were the hardest hit by the technical difficulties, with the official YouTube stream never coming online. Fortunately there was an alternate stream for the Spanish language broadcast. It still wasn't perfect, but at least I was able to watch 45 minutes or so live including both goals. And the full game is now available on YouTube (embedded below).

The match itself wasn't in the most beautiful setting, played in heavy wind on on top of football lines on the field of Benedictine University. But the Reign fought through to a well-earned and welcome 1-1 road draw. Fighting is the right term, because if there's one thing we learned from the opening match, it's that this is a physical team.

In the absence of pretty much all of their forwards, the Reign lined up in a 4-3-3, with Keelin Winters and Jess Fishlock positioned as holding midfielders behind Kaylyn Kyle in the center of the middle band. That was the group that set the tone for Seattle. Both Winters and Fishlock were ferocious tacklers, going to ground early, hard, and often to disrupt Chicago attacks. Fishlock in particular, despite being one of if not the smallest player on the field, was a wrecking crew with slide tackles and shoulder challenges. She picked up an early yellow for persistent infringement, after which she stayed physical but wisely avoided risking another caution. Kyle was a hard tackler as well, but she was also able to connect the midfield with the forward band of players.

That group included a converted defender in Kiersten Dallstream, attacking midfielder Christine Nairn, and genuine forward Liz Bogus. It was the latter two who hooked up for Seattle's goal in the 11th minute. After a Chicago goal kick, Winters won the 50/50 header to Dallstream, who one-touched it to Fishlock, who chipped it to the wing to Bogus, who crossed it into a wide open Nairn for the diving header and a goal. It was a confident, well-worked passing sequence that gave a glimpse of what this team can do even with their shorthanded roster.

But there wasn't much more of it as Chicago effectively prevented Seattle from getting the ball into the forward group. In return, they didn't create many chances of their own until the 25th minute, when Seattle keeper Michelle Betos misplayed a pass that gave Chicago the ball 20 yards out. First overall pick Zakiya Bywaters crossed it for a nice head-on flick and the ball fell to an unmarked Lori Chalupny, who roofed the shot off the crossbar and in for the equalizer. It was a mistake by Betos, but not all hers as the defense had plenty of time to recover from the turnover and Chalupny should have been marked. And Betos dominated through the rest of the match, particularly in the air where she picked out a number of dangerous corners and crosses.

In the second half, Seattle was playing against the wind and looked content to pack the passing lanes and prevent Chicago from building any attack. It mostly worked, though the Red Stars still had some chances, including a long shot that Betos had to acrobatically dive to stop and a loose ball in the box that had the Reign scrambling to block a couple of close range shots.

Still, it was enough and Seattle got out with a point that they'll feel good about. This isn't close to the best roster that the Reign will line up with this season and they'll still need time to build understanding as teammates. Road points now are a welcome sign that the team can be a contender in their first season.

They were scheduled to play the Haiti national team in a friendly yesterday but ended up canceling, because the field looked like this: 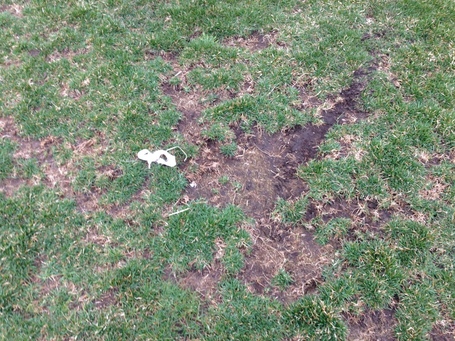 But remember, it's a natural grass field, so it's inherently better!

Next up is the Portland Thorns in Portland next week. That should be a substantially better environment with better infrastructure and a better field, and a chance to see how the team does against one of the best teams in the league.

Here's the full video the match: