Tiffert's Sounders career is cut short after joining the team last July, potentially clearing the way for the addition of Obafemi Martins.

Just hours before the start of the season, the Seattle Sounders have announced that they will "part ways" with Designated Player Christian Tiffert. The move has been anticipated for several weeks, as the German midfielder had not been training with the team, and it clears the way for the Sounders to sign another Designated Player.

Tiffert's departure comes after he made just 12 regular-season appearances and four more in the playoffs in which he never scored and logged just four combined assists.

Unfortunately, he may be best remembered for being one of three Sounders to miss their penalties during the U.S. Open Cup-deciding shootout against Sporting Kansas City. Aside from that, all we'll have is a litany of mad-dog looks he tended to give to opponents and referees when showing his displeasure. 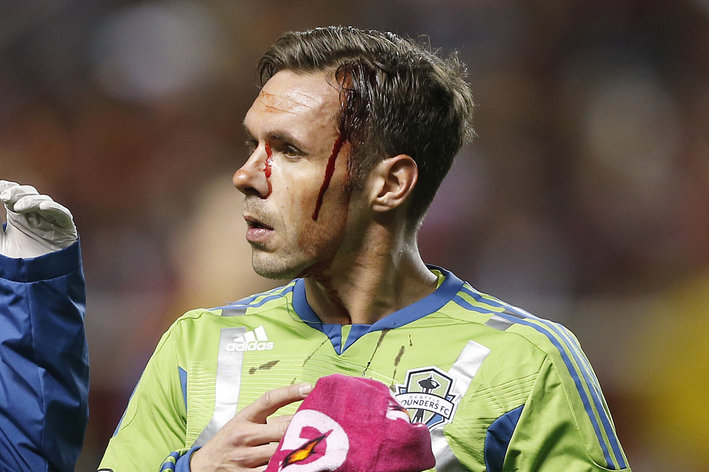 German reports suggest Tiffert may have been owed as much as $1.5 million.

That's not to say Tiffert was a total failure. While his production left much to be desired, he did seem to give the Sounders offense a boost upon his arrival. He never proved to be the assist machine we had hoped to see, but he clearly helped move the ball through the midfield and provided some added edge to an attack that sometimes seemed a bit soft.

Although the general expectation was that he would benefit from a full preseason, the writing has been on the wall that this was a distinct possibility ever since the end of the 2012 season. Sounders GM Adrian Hanauer and coach Sigi Schmid talked openly about the need to get better production out of the team's three DP spots.

This move, like the Fredy Montero loan and the pursuit of Obafemi Martins, would seem to suggest the team is putting some weight behind those platitudes. Tiffert was not a bad player by any stretch, but if David Beckham and Robbie Keane are the benchmark, he clearly fell short.

At his best with the Sounders, Tiffert was a solid but unspectacular box-to-box midfielder. He could be relied upon not to make mistakes, but he didn't seem entirely capable of dominating a game either. While no one is saying so, it also didn't help Tiffert's cause that he never seemed to connect with his teammates. Schmid has made it clear that the team needs more leaders, but on and off the field, and Tiffert didn't seem to be doing that in either place.

Finding those kinds of players has proven far easier said than done, as the Sounders are well aware. Tiffert is the second DP they've chosen to buy out in the last three seasons and he's the fourth DP that has left under less-than-ideal circumstances.