The Seattle Sounders have pulled off the biggest signing of the post-Beckham era. Now, how do they make the most of it?

When the opportunity to add a player of Clint Dempsey's caliber presents itself, "how is this guy going to fit into our team?" likely isn't the first question that springs to mind. Players in their athletic prime with Dempsey's skill and pedigree don't exactly come to MLS every day, and finding a way to get them on the field is a significantly less pressing issue than, say, getting them out of the airport before a bunch of drunk passionate supporters start taking pictures.

Still, at some point it's something Sigi Schmid is going to have to figure out. In the grand scheme of things getting the best from all three of Dempsey, Obafemi Martins and Eddie Johnson is a pretty good problem to have (if it could even be considered to be a problem.) Pretty much any coach worth their salt is going to be capable of finding a place for those three guys in a starting XI, and given Dempsey's ability to play as both a central attacking midfielder or creative winger, he instantly helps to solve the Sounders most glaring problems.

Dempsey's versatility may well be his most underrated attribute. He can play comfortably anywhere in the attacking midfield band, as a withdrawn forward or as an out-an-out striker at an elite level. That's something very few-if any-clubs in MLS have ever had. In short, signing Clint Dempsey gives the Sounders a whole lot of options. Let's take a look at a few of them. 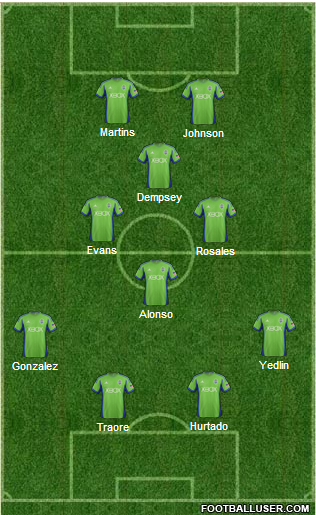 This is probably the most obvious choice, and one that I'd expect the Sounders to roll out most often (at least at first.) You may recall Sigi Schmid using this formation towards the beginning of the 2011 season, when the Sounders were suffering through some pretty major injury troubles (or at least what seemed like major injury troubles at the time) and strugglig to find a rhythm, leading to a tactical approach that placed an emphasis on crowding out the midfield. It was somewhat effective, but it was pretty ugly; sometimes a pragmatic approach is what's called for, but that doesn't necessarily mean anyone wants to get used to it. Thankfully, a diamond 4-4-2 doesn't have to be unattractive, and right now the Sounders have the pieces to make it work.

The narrow shape of the midfield in a diamond 4-4-2 puts the majority of the responsibility for creating width on the fullbacks. DeAndre Yedlin's ability to contribute to the attack isn't in question, and though Leo Gonzalez isn't quite a match for the youngster in that department he's an above-average attacking LB and could be swapped out for Marc Burch should the situation demand it. But the real key here is in the center of the midfield spine; Osvaldo Alonso is good enough to own the space in the defensive half of midfield, while Dempsey can have free reign in the second band of attack. With Brad Evans offering a more defensive presence, it's easy to see an unbalanced shape with Dempsey shifting left and Rosales occupying central space causing some problems for teams weak down the right flank.

The Sounders have enough raw talent to make this kind of shape effective, but is it really the optimal approach? There are certainly drawbacks. Asking Alonso to concentrate so much of his effort on defense shortchanges his creative abilities, while asking Gonzalez to contribute so much to the attack exposes his weaknesses to an extent that likely isn't ideal. A conservative approach isn't inherently bad (and might be the correct one while trying to integrate a new key player into a team) but it also quite often carries with it a significant opportunity cost. 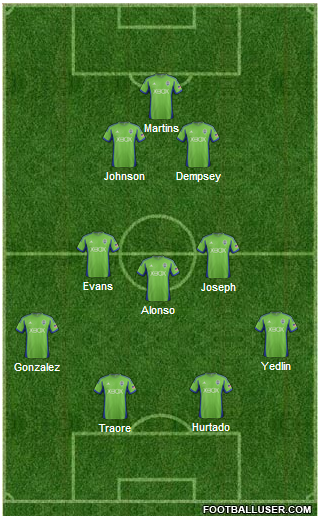 The 4-3-2-1 is a formation that does not have the most positive associations in the mind of the modern football fan. If you thought the diamond 4-4-2 was stifling, the Christmas Tree is likely akin to being smothered by an electric blanket while spending an August vacation in Baltimore. With all three of Dempsey, Martins and Johnson pushed into the first attacking band and the entirety of the midfield pushed into the center, any suggestion of width in the attack has to come from the outside backs, lest a gaping hole appear in the center of midfield for counter-attack happy teams to exploit.

With the right talent and against the right opponents, however, the Christmas Tree can work. Do the Sounders have the right talent? I'm skeptical, at least over the course of a full game. This is a shape that really requires a deep lying playmaker to function at an optimal level, and though Shalrie Joseph could-theoretically-in-a-perfect-world be that guy, that's not something worth gambling on. Situationally, this could work out well for Seattle. But as a permanent solution, there are some serious shortcomings. 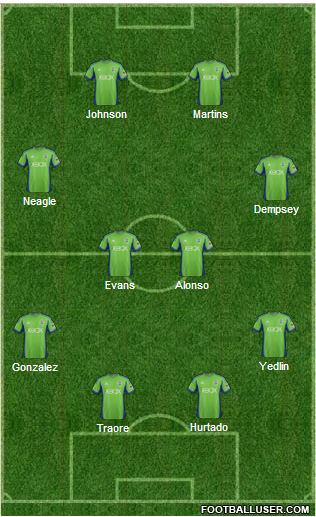 The cynical among us will likely assume that this is the shape Sigi will run out, and there's a fair chance they'll be right. There's a good reason for that; the 4-4-2 is a pretty adaptable formation, switching from defense to attack on a dime and giving a team at least a fighting chance against pretty much any formation the opposition is likely to throw out there. The downside, of course, if that there's little creative presence in the central midfield, but with Yedlin pushing up on the right and giving Dempsey license to move into the center that's somewhat less of a concern.

The major upside of this shape is its versatility. Evans could quite easily shift to the left wing with either Joseph or Carrasco sliding into the center. Each of the wide midfielders are quite comfortable up top while each of the strikers are at least somewhat comfortable on the wing, bringing that all-important sense of unpredictability to the attack. Playing the central midfield so deep and pushing the wide midfielders so high up the pitch creates some vulnerabilities, and the Sounders have been vulnerable down the flanks so far this season. But this is still a relatively safe choice, and as safe choices go this one is pretty exciting. (It's still kind of boring, though.) 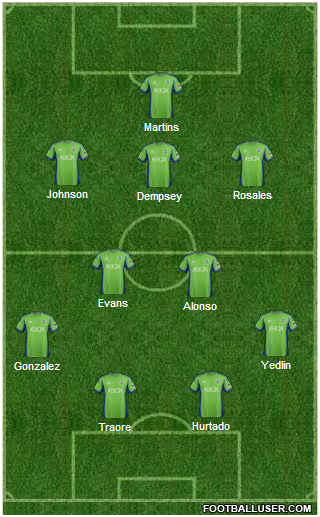 Those of you that have been hoping to see EJ at left midfield, rejoice! This is really the only formation in which such a thing makes sense. The double pivot in midfield keeps things tight ahead of the back line, while EJ's pace down the left flank and Evans' ability to rotate in that direction keeps the pressure off of Leo to do much of anything in the attacking phase of the game.

There's very little chance that this formation would end up staying in any way balanced; EJ would undoubtedly creep to the middle, while Dempsey or Evans would spend a great deal of time floating out to the left. With Yedlin pushing forward and Rosales being Rosales, that leaves the right flank somewhat exposed, but that's been the case for much of this season and the back line has largely done an excellent job providing cover for Yedlin's forays into the attacking third when necessary. There's certainly a whiff of underutilizing EJ here given the talent level of MLS, but it's clearly an interesting approach. 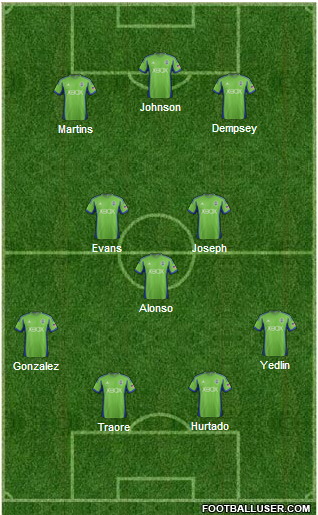 To the layman's eye, there probably doesn't seem to be too significant of a difference between this formation and the Christmas Tree so widely derided up above. That's likely because you have to drag-and-drop players freehand and I'm really, really obsessive compulsive where it comes to images lining up on a grid. What's important is that the wide forwards are actually wide forwards, clearly pushing higher up the pitch as compared to your typical wingers and also cutting into the box on their stronger feet where the opportunity presents itself.

Shalrie Joseph is (believe it or not) quite important to making this formation work, because the delivery of the long-ball in this formation is key. This team isn't quite technical enough to make a short passing game work with this shape, but the athleticism is beyond compare and the quality of Evans and Alonso in central midfield is more than enough to cover for Joseph's shortcomings.

Still. this doesn't seem quite emphatic enough. The Sounders are now quite clearly a team that wants to score some damned goals, and they have more than enough talent with which to do so. And hey, the above formation gets Dempsey, EJ and Martins on the pitch, all playing very attacking roles. What more could one ask? 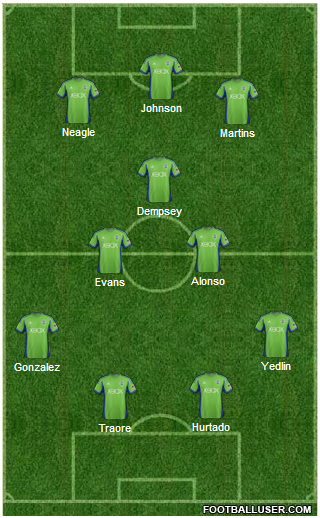 I do not expect to see this formation. After all, I am a simple office lackey moonlighting as a guy whose opinion on soccer is genuinely important. I have zero skin in the game, so it's easy to suggest very aggressive tactical approaches and just walk away with little to no actual repercussions.

And yet... We've already discussed Osvaldo Alonso's capabilities in midfield. We've been discussing them for four years now. Brad Evans is similarly good, especially in a water-carrying role. That's a double pivot that almost every club in the league would love to have. And then Clint Dempsey is at the top of that triangle. We've covered Deuce's ability to fill multiple roles in the attacking band so I won't bore you with the specifics, but suffice to say he's probably good enough to play in that space.

The question here is whether or not Sigi Schmid feels comfortable playing with such an attacking formation. And if he decides that he is not, there's a decent case to be made that he's making a reasonable decision. Formations are significantly more fluid that most fans would like to think, and talented teams that take the defensive approach are more likely to win than to lose.

In short, we're in for an interesting few months. Sigi Schmid has been handed the keys to a (relative) Lamborghini, and it will be interesting to see how things go. But no matter how things turn out the rest of they way, it's pretty clear that this is the most interesting time in Sounders' history.