Adam Moffat is a solid addition to Sounders midfield

With Shalrie Joseph struggling with injuries, the Sounders have acquired a solid, defensive-minded midfielder to help provide some much needed depth and lineup versatility.

Share All sharing options for: Adam Moffat is a solid addition to Sounders midfield

With the news breaking that the Sounders have traded Servando Carrasco and draft pick to the Houston Dynamo for Adam Moffat, fans are no asking what kind of player Seattle has added.

Moffat is a 27-year-old Scottish midfielder with a solid MLS pedigree that includes an MLS Cup victory under Sigi Schmid back in 2008 when playing for the Columbus Crew. After a stop in Portland, he was traded to Houston where he's been a regular starter for Dominic Kinnear and a key part of their two straight trips to the MLS Cup Final. 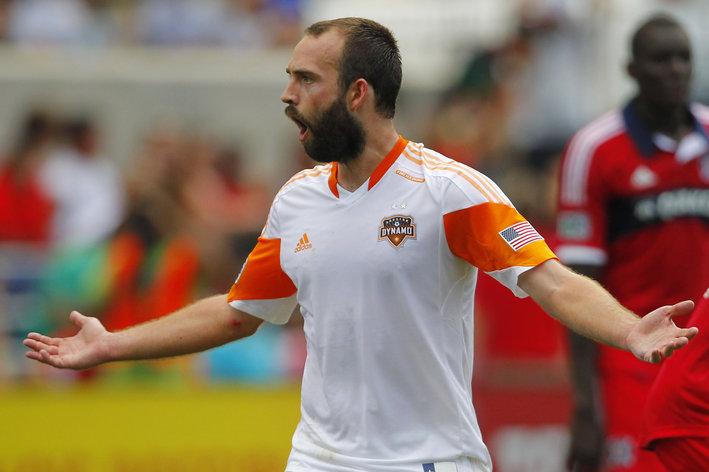 The Sounders gave up Servando Carrasco and a second-round draft pick in exchange for Adam Moffat.

He's a defensive-minded midfielder with a physical style that is similar to how Osvaldo Alonso plays the game, minus some of Alonso's skill. He's not afraid to go in hard on a tackle and fight for a ball, but he's also not a one-dimensional player. While not being a true box-to-box midfielder, he can get forward into the attack and has an extremely dangerous long rang shot that Houston fans have enjoyed referring to as "Moffat Rockets" since the joined the team back in 2011.

For me it's a solid depth move for the Sounders and gives them another option to pair with Alonso in the midfield, especially with Shalrie Joseph struggling with injuries again. He should combine well with Alonso and pose some problems for opposing defenses since either player is capable of joining the attack with reasonable effectiveness.

I like this move from a Sounders perspective and I think Moffat fills a need for them. He's also the type of player you like to have for the often hotly contested, overly physical playoffs games that the Sounders are sure to face later this year. Speaking on playoffs, Moffat knows what it takes to win in the MLS playoffs and has played in the final three times. Combine that with a familiarly with Sigi and you can see another angle on why this trade makes sense.

One final thought, when a fan base is genuinely upset by a players departure -- which Dynamo fans are -- you know you're getting a player that does good things on the field for his team.