It isn't about tacos. Acquiring Friberg is about making the team better than it is now.

Yesterday there was a flurry of activity about the potential use of the #1 Allocation Ranking, a little bit of transfer money and clandestine negotiations to re-acquire fan and team favorite Erik Friberg. People got excited. He's famous for tacos. He's slightly less famous for picking on Fucito and Evans.

People should also be excited because he is some of what Seattle Sounders FC needs right now. Not tacos, not fan friendliness. They need capable players that can fit into the top six on an ordinal ranking of importance. Sounders FC needs some defense in the attacking third and a player that is a good passer, if not creative.

One of the first things, maybe the first, that nimajneb wrote at Sounder at Heart looked at exactly that. Erik is a good forward passer when compared to the man who is now the standard of Central Midfield excellence (yes, he's going to play wide this year.) 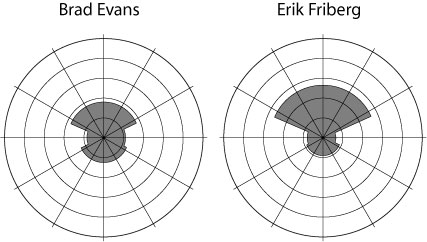 We know that B-Rad improved since then. We also know that he did so because he was expected to and his soccer IQ improved. Friberg is in a similar section of his aging curve. Intelligence and reading of the game is not an issue.

His touch radius is bigger than Evans' as well. He gets forward into the attack just a bit more. He offers an easy outlet. His defense is good for the areas of the pitch he occupies. His set-play service is more than passable.

At the MLS level he can play a right mid, center mid and left mid at MLS Playoff starting quality. In fact though known more on the right than left here in the States his career leans to the left side of the pitch. Yes, Sigi Schmid said that we should expect some asymmetry this year with one winger higher than the other. Most of that is due to Yedlin's ability to get forward. Some of that is so that four people will be in the attack.

Friberg is not the assist man that Marco Pappa is, but then again Marco Pappa isn't the assist man that many think he is. While labeled with the word "creative" Pappa's ability to create is not reflected in strong numbers. He can dribble better than Seattle's likely addition. He may even be a better passer in the final third. That will probably be answered this year.

His defense is much worse. His role flexibility is lower. Link up play is not his forte as Pappa looks to be the final pass or final shot. Seattle probably needs some of Pappa's strengths.

But the club also needs Friberg's strengths. Both would fit into the second tier of quality on the squad. Neither is going to unseat Alonso, Dempsey, or Martins for 2014 expectations in on-field importance. But they could challenge Evans, Marshall, or Yedlin. With what we know about Erik is that he was already more Evans-y than Evans. Then he went to Sweden and played quite well according to reports there.

Sweden, the land where American players used to go to get paid. Now the league where MLS pulls talent to America. This is a small step up for the league.

It is also a small step up for Sounders FC and it isn't because of tacos.